By Andrew Hahn, Wisconsin Center for Investigative Journalism - Aug 7th, 2016 10:56 pm
Get a daily rundown of the top stories on Urban Milwaukee 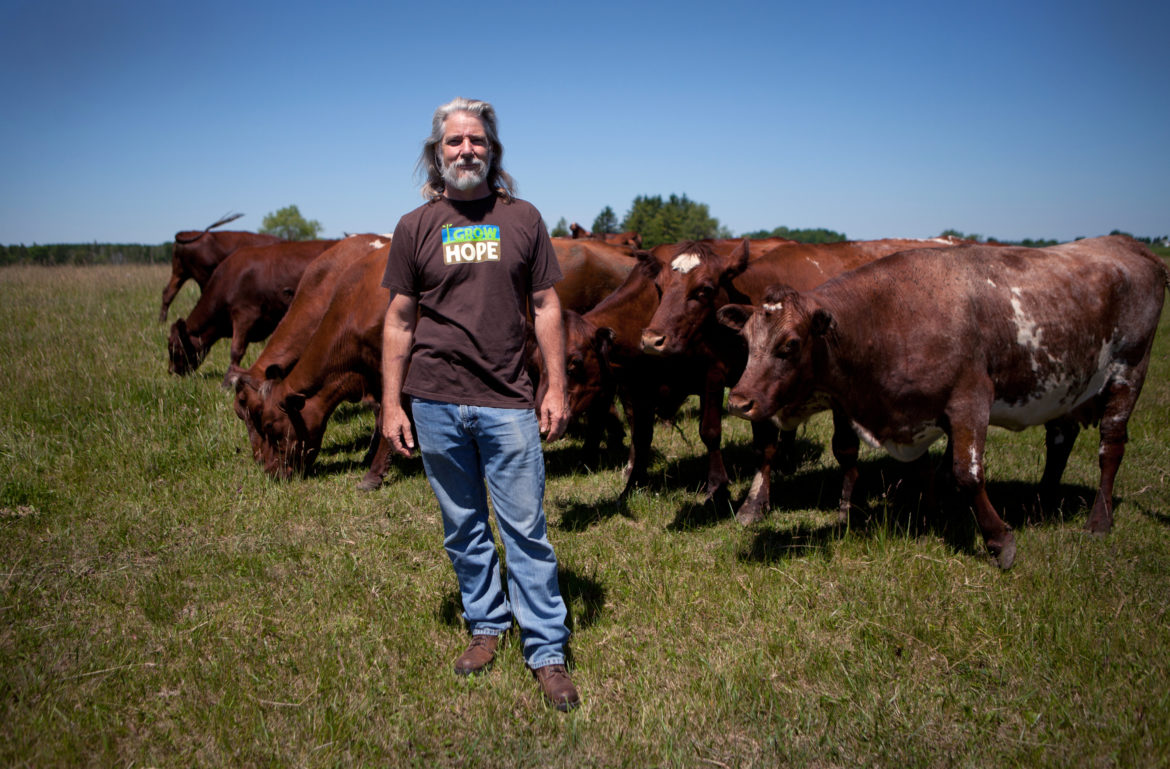 Lynn Utesch, a farmer running as a Democrat for state Assembly in the 1st District, is photographed at his home in Kewaunee County on June 24, 2016. Utesch raises grass-fed beef and has pushed to find solutions to groundwater contamination in the county, which he believes is caused by manure from concentrated animal feeding operations, or CAFOs. He is also a co-founder of the environmental group Kewaunee Cares. Photo by Coburn Dukehart of the Wisconsin Center for Investigative Journalism.

Wisconsin voters’ concerns about pollution in lakes and streams, contamination of drinking water supplies and depleted aquifers are transforming water into a key campaign issue in this fall’s elections, including the race between Republican U.S. Sen. Ron Johnson and former Democratic Sen. Russ Feingold.“I can’t remember a time when it (water) was a major statewide political issue,” said University of Wisconsin-Madison history professor John Sharpless, a former Republican congressional candidate.

In Wisconsin, water worries have increased in response to shifts toward large-scale livestock farming and growing knowledge about the threats that lead and other contaminants pose in various regions.

Residents of Kewaunee County and the Central Sands region of the state — two of the areas most vulnerable to groundwater pollution — are demanding answers from politicians who acknowledge they cannot afford to ignore water issues if they want to keep their seats in the 2016 election.

Testing over the past few years has uncovered widespread contamination from bacteria, nitrate and viruses in private drinking water wells in Kewaunee County — some of it linked to the proliferation of large dairy farms known as concentrated animal feeding operations, or CAFOs.

The Wisconsin Center for Investigative Journalism’s Failure at the Faucet series also has found that hundreds of thousands of state residents are at risk of drinking water with unsafe levels of nitrate, bacteria, arsenic, lead and other contaminants.

Sharpless said Wisconsin has not had the type of defining environmental disaster that has driven change in other parts of the country and at other points in history.

“We have had no equivalent to the Love Canal disaster or when Cleveland’s Cuyahoga River caught fire in 1969,” Sharpless said. 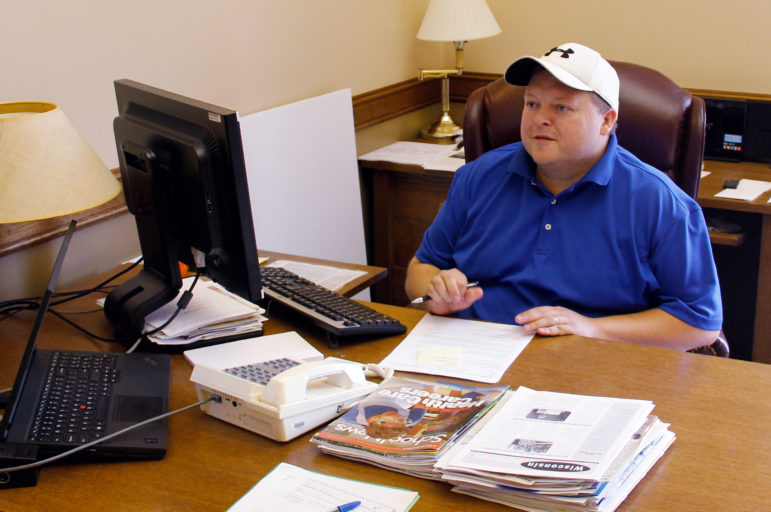 Rep. Scott Krug, R-Nekoosa, photographed in his office in the Wisconsin state Capitol in Madison, Wis. Krug says it would be “political suicide” to ignore public concerns over water quality and quantity in the 72nd Assembly District. Photo by Andrew Hahn of the Wisconsin Center for Investigative Journalism.

State Rep. Scott Krug, R-Nekoosa, said the move of large dairy interests into his Central Sands district has changed the political landscape for him.

Recent data show the administration of Gov. Scott Walker, who has declared Wisconsin “Open for Business,” has been loathe to hand out fines for environmental infractions. A recent report from the Legislative Audit Bureau found the state Department of Natural Resources failed to follow its own policies 94 percent of the time over 10 years when wastewater treatment plants or large farms violated terms of their permits.

While high-capacity wells have been blamed for drying out lakes and streams in the Central Sands, Republican Attorney General Brad Schimel has issued a formal opinion that Wisconsin officials lack the legal authority to block any well based on drawdown from existing wells. 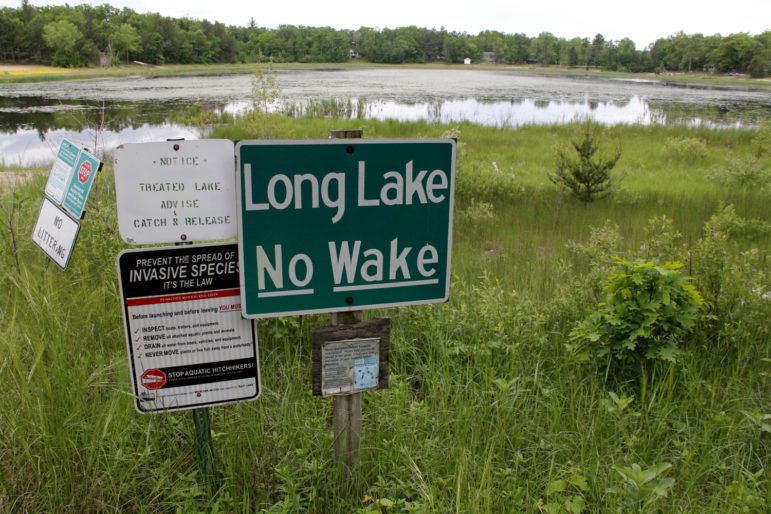 The boat launch at Long Lake, near Plainfield, Wis., no longer reaches the water. In Wisconsin’s Central Sands, some lakes and streams have lowered or dried up in recent years as the number of high-capacity wells has mushroomed, largely for irrigation. Concern over drawdown has become a big issue in the 72nd Assembly District race between Republican incumbent Scott Krug and his Democratic opponents, David Gorski and Russ Brown. Photo by Kate Golden Wisconsin Center for Investigative Journalism.

These moves have sparked sharp criticism by some residents in Krug’s district that Wisconsin’s leaders are not protecting its water resources.

“I wouldn’t say it’s California-urgent, but it’s one of the first emerging parts of the state of Wisconsin where it could potentially become California-urgent,” Krug said of the drawdown of local aquifers. “There are parts of my district where lakes have entirely disappeared.”

Caught in the middle

Krug has tried to straddle the warring sides, earning awards from the Dairy Business Association, which represents dairy farmers, milk processors and related businesses; and an endorsement in 2014 from the Wisconsin League of Conservation Voters, which says it is “committed to recapturing our state’s nonpartisan conservation legacy.”

“I think it’s political suicide to not at least acknowledge that there’s issues going on right now,” Krug said. “Even if it wasn’t a touchy issue when it comes to election issues, it’s a touchy issue at Wal-Mart. It’s a touchy issue at the bank. So those are things that I have to work on because, if you don’t get it done, you keep hearing about it.”

Both Democrats vying to unseat Krug are running on platforms to protect the region’s water quality. 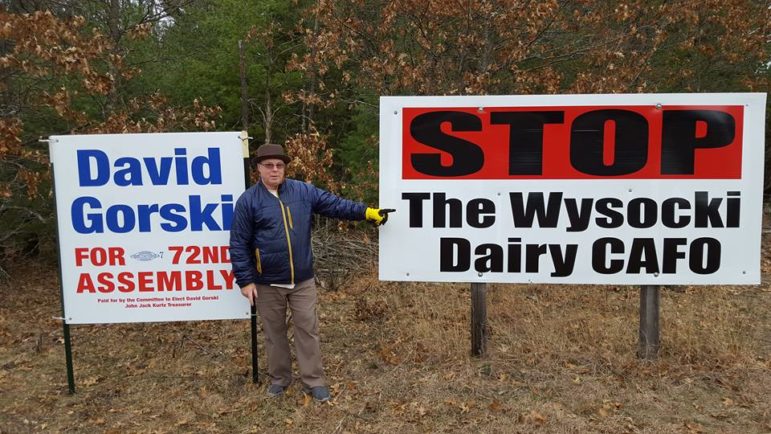 David Gorski is running as a Democrat for the 72nd Assembly District. He is seen here with a sign opposing the Golden Sands Dairy, which has been proposed by the Wysocki Family of Cos., which also owns the Central Sands Dairy. On his Facebook page, Gorski said: “We all want businesses to grow, but one business shouldn’t be allowed to harm the health and property value of its neighbors.” Photo courtesy of David Gorski.

Nekoosa school counselor David Gorski is a self-professed “Berniecrat” who supported former Democratic presidential candidate Bernie Sanders. He said Krug and other Republicans have a history of voting against the environment.

Gorski said the DNR should allow high-capacity wells or CAFOs only if they “can operate without an adverse effect on the environment. That’s the way it’s supposed to go. The problem is, that’s not what’s happening under the Walker administration.”

Krug’s other Democratic challenger is Russ Brown, an organic farmer from Coloma who will face Gorski in the Tuesday, Aug. 9 primary. On his Facebook campaign page, Brown said he is driven by concerns over water quality, proposals for large farms in the region and the proliferation of high-capacity wells blamed for depleting water bodies including the Little Plover River and Long Lake.

“There is tourism, and if we don’t handle this problem, we’re going to cripple tourism,” Brown said. “We’re also going to cripple people who have bought or continue to buy vacation homes and retirement homes in the Central Sands area.” 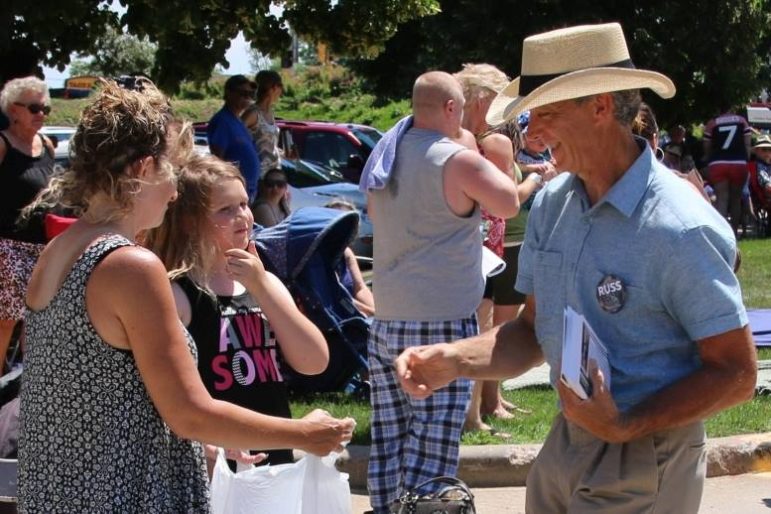 Organic farmer Russ Brown, who is challenging Rep. Scott Krug, R-Nekoosa, campaigns in Wisconsin Rapids during the Cranberry Blossom Festival Parade on June 19. Brown, a Democrat, and Krug agree water quality and quantity are key issues in the race for the 72nd Assembly District seat. Photo courtesy of Russ Brown.

One of the biggest controversies in Krug’s district is a proposal by the Wysocki Family of Cos. to build a 7,800-acre dairy operation in the town of Saratoga in Wood County.

For years, the Wysocki family has been fighting with the town over its proposed Golden Sands Dairy, which would include 4,000 cows, 300 heifers and 1,000 calves and produce about 55 million gallons of liquid manure, 25,000 tons of solid manure and other waste per year. The company won a recent court battle, but the town continues to fight. The DNR is reviewing the proposal.

Wysocki’s existing facility, Central Sands Dairy, came under fire in May for what nearby residents claimed was improper manure spreading. Residents cited among other things application of liquid manure that took place during a heavy rainstorm. The DNR ruled in June that the dairy did not violate DNR rules.

Krug has opposed the new dairy, asking the DNR in 2014 to deny the Golden Sands permit application. He cited concerns about the facility’s 33 proposed high-capacity wells and an outbreak at the time of dangerous E. coli bacteria in Nepco Lake and Lake Wazeecha. The Wood County Health Department did not trace the bacteria to a specific source.

Krug sometimes finds himself on the opposite side from many fellow Republicans on this issue.

“I’m not necessarily frustrated with my caucus, it’s just a helpful hint to them that over the last three sessions, as much yelling and hollering as I’ve been doing about this, it’s time we start working on it.”

Assembly Republicans are not taking Krug’s chances for re-election to the 72nd Assembly District for granted. The Republican Assembly Campaign Committee gave Krug $12,000, one of just six candidates so far to receive five-figure support from the committee.

“My district is always going to be competitive,” Krug said. “After redistricting, it’s a 50.1 percent seat … It’s going to be a tight race no matter what.”