Harry’s on Brady a Major Disappointment

But the servings are large and the food spills out, if you like that sort of thing. 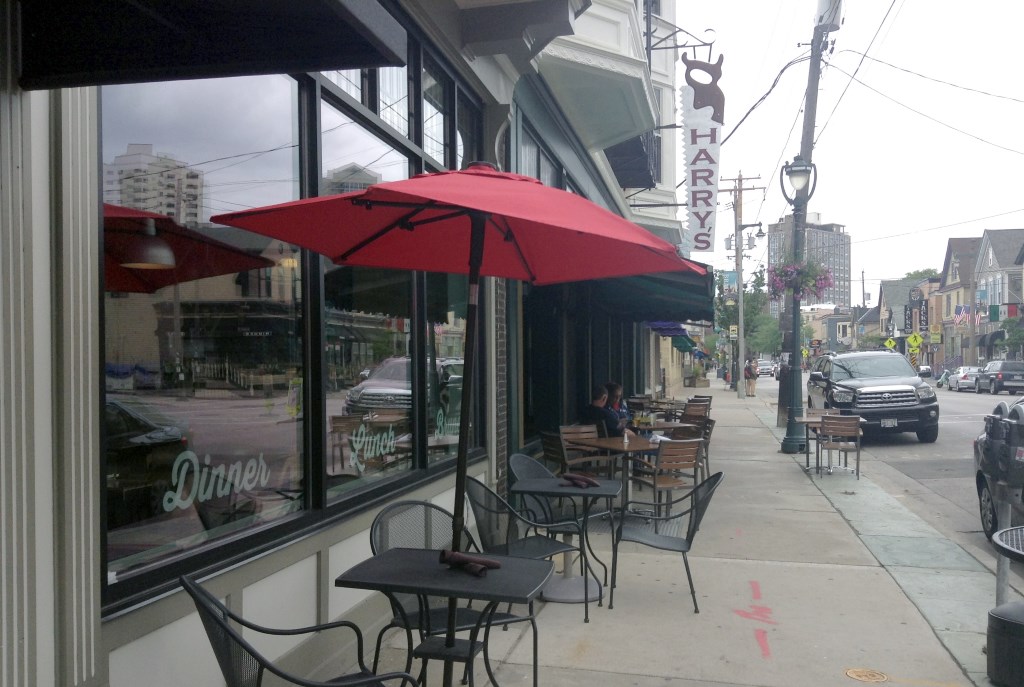 As a former frequent customer at Brady Street Hardware, now reinvented as Harry’s on Brady, I’m impressed with the makeover. The interior, minus those crowded aisles seems like it has doubled in size, almost a trompe-l’oeil effect creating a much larger space that accommodates a long bar, a large circular booth, four wall-mounted TVs, two dead animal heads on a back wall, and a scant number of tables. Bar patrons will find ample room to stand if that’s their preference. Huge windows face Brady where a few tables under an awning offer street-side dining. We found the tunnel-like entrance a little odd, but our server explained that it’s intended to keep out winter air during the cold season. It also serves to partially divide the room.  The owners kept the original tile floor, painted the pipes brown in keeping with the rest of the subdued colors, and saved the antique door, a Brady gem. To find the bar, look for the hanging saw that formerly announced the hardware store, now repurposed as signage for Harry’s.

The best thing I can say about most of the dishes friends and I sampled — they photographed well.

I’ll begin on a sort of positive note. From the Daily Special Menu, we bypassed the burger of the month because we couldn’t understand how a person could get their mouth around an 8 oz. burger encased in four slices of rustic Italian bread. 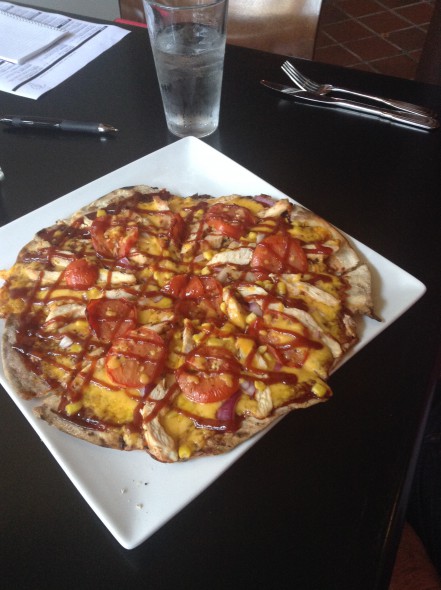 From that menu, the Chef’s Pizza with grilled, not baked crust piqued our curiosity. The pizza turned out to be the best dish on the table. The thin crust, crisp around the edge, chewy in the middle, made a nice platform for chunks of grilled chicken, chopped red onion, corn, several slices of roasted tomato, and a layer of mild cheddar cheese. An artful drizzle of barbeque sauce complemented that tasty combination. “They put a lot on my pizza without overloading it,” my companion noted. Some aged cheddar would have elevated it, but mild aka tasteless seems to be the modus operandi for cheese at Harry’s.

Likewise, the oversized quesadilla came loaded with that same gloppy cheese tucked between grilled chicken and a plethora of black bean and chipotle puree. A little less of everything stuffed inside the quesadilla and more time on the grill to crisp the tortilla might have redeemed what was a soggy mess on the plate. Fresh pico de gallo along with sour cream, jalapeno rings, and a scoop of guacamole helped the overall presentation. If more is better, then this quesadilla, enough for two, will satisfy hungry bean and cheese loving customers.

No problem with the Reuben, a classic mix of corned beef, kraut, and swiss cheese on grilled rye. “There is a lot of corned beef in my sandwich,” said a random customer at the nearby table.

Her companion, less enthused about his La Casa, an 8 oz. burger topped with fire-roasted salsa, jalapenos, pepper jack cheese, and avocado said, “It’s impossible to eat. It has too much stuff on it that keeps sliding around.” That would explain the salsa on his shirt.

The Thai Chicken Tacos were ridiculous. The menu read, “peanut oil, ginger, soy, flour tortillas, three dipping sauces.” Yes, there were three little sauces, soy, sweet and sour, and something we couldn’t identify. Strips of pickled ginger draped over shredded iceburg lettuce added a little pizzazz to bits of crumbled chicken entirely devoid of flavor. The limp flour tortilla collapsed when I tried to pick up the thing hoping to take a bite. That sent those little chicken bullets rolling all over the table. Someone please inform the chef there’s more to a Thai taco, if there even is such a thing, than pickled ginger, three sauces, and some dry tasteless chicken.

Things looked up when my companion’s Grilled Peach Salad with blackened chicken came to the table. A large bowl of mesclun greens, toasted almonds, blueberries, and grilled peach slices were dressed with honey-balsamic vinaigrette. A generous serving of hot, spicy blackened chicken left an “after burn” my friend said. She added, “I would recommend a caveat on the menu. Only people who can handle spicy hot should order this salad.” She ate the greens, the nuts, the fruit, and boxed the chicken for her husband.

From the First/appetizer menu, Fried Green Tomatoes with crab and avocado salad, shredded lettuce, and Louis dressing sounded like a dish that couldn’t go wrong. The fried tomatoes had a crisp crust with no sign of greasy. The iceburg lettuce was normal as was the Louis dressing served on the side. The salad, not crab and avocado as in separate but equal, but a mush of canned crab and avocado, tasted so fishy that we declared it inedible and asked for the check.

Brady Street has many seriously good restaurants, Thai-namite, La Masa, Easy Tyger, Brewed, to mention just a few. It would be nice if Harry’s upped the ante in the kitchen and joined that list. 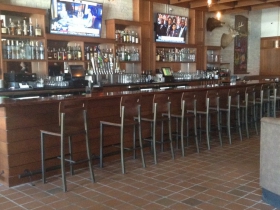 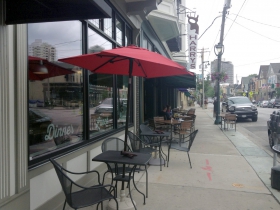 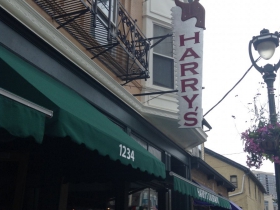 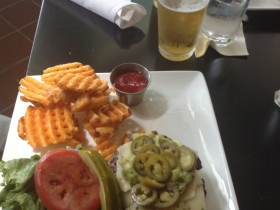 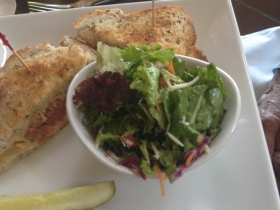 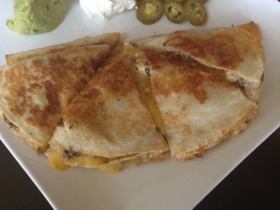 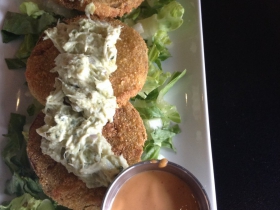 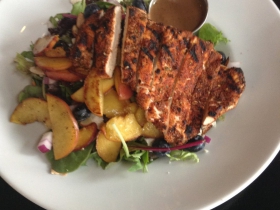 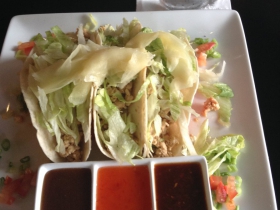 3 thoughts on “Dining: Harry’s on Brady a Major Disappointment”