But efforts by their shadowy Libre Initiative may be undercut by Trump. 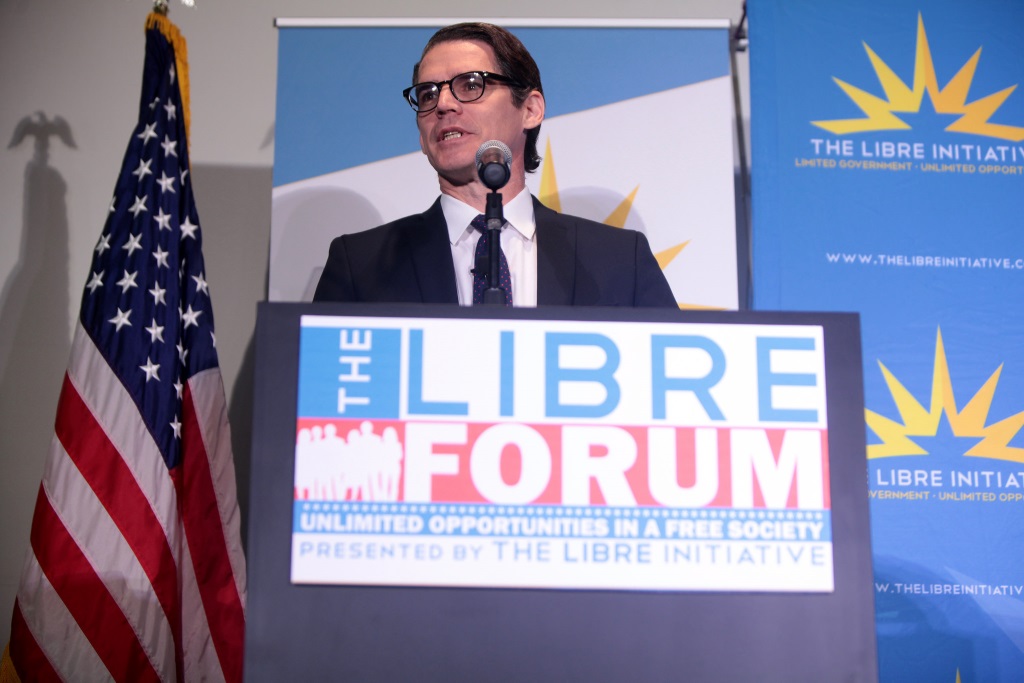 Daniel Garza speaking with at the Libre Initiative’s The Libre Forum at the College of Southern Nevada in Las Vegas, Nevada. Photo by Gage Skidmore.

Back in February 2014, a man named Daniel Garza did an Op Ed for the Milwaukee Journal Sentinel calling Obamacare a disaster for the Hispanic community. Garza’s entire column seemed filled with concern for Hispanics, and the column identified him only as executive director of the Libre Initiative.

Few if any readers would have known the Libre Initiative is a Koch Brothers-funded group and Garza is a longtime Republican who served in two different positions with the administration of George W. Bush.

As for the idea that Obamacare is bad for Hispanics, a study published in the Journal of the American Medical Association found the Affordable Care Act has decreased the uninsured rate for working-age Latinos from 36 to 23 percent, and from 35 to 17 percent among all Latinos in states that chose to expand Medicaid. Probably no ethnic group in the nation has benefitted more from Obamacare.

This sort of messaging has led critics to blast the Libre Initiative as a fake grass roots group that works to get Latinos to vote against their own interests. Anthony Gutierrez, a campaign spokesman for then-Congressman Pete Gallego, offered this description of the group to Progressive Magazine in October 2014: “The Libre Initiative has no interest in actually solving problems. It exists to play dirty politics and lie to the Latino community.”

Libre has been around since 2011, and the non-profit, 501(c)4 group now has branches in 10 states, including Wisconsin, which began operations last fall. The group has at least 70 staff in those 10 states and is quite well-funded. “Freedom Partners, an umbrella organization for Koch network donors, has provided the group with $15.8 million in funding, according to federal tax records,” the New York Times reported.

The group also claims to have gotten money from “hundreds” to “a thousand” other donors, but is not legally required to disclose its donors and has never done so. A group that watchdogs conservative groups found that between August 2011 and June 2013 Libre took in $7,105,000 from two Koch-run outfits: Freedom Partners Chamber of Commerce and the now-defunct TC4 Trust and reported total income of just $7,117,128, “suggesting that it is almost entirely funded through the Koch Brothers.”

Many of Libre’s top staffers have Republican connections. “The group’s national strategic director is Jose Mallea, formerly the campaign manager for GOP Florida Senator Marco Rubio. Its policy director, Jorge Lima, was once an adviser to former Puerto Rico Governor Luis Fortuño, who tried to mimic Wisconsin Governor Scott Walker’s attack on the territory’s unions. And the group’s chief of staff, Andeliz Castillo, led outreach to Hispanic media for the Republican National Committee in 2008,” Progressive reported.

And the group’s national spokesperson is Rachel Campos-Duffy, the TV personality who is married to Wisconsin Republican congressman Sean Duffy. An Associated Press story called the Libre Initiative “a shadow GOP — one with a gentle emphasis on social services and assimilation over a central party often seen as hostile to immigrants and minorities.”

Libre’s staff and volunteers offer all kinds of freebies to Latinos to win their support. At a recent forum in Milwaukee, “Attendees were offered free sunglasses, lip balm, wristbands, notepads and pens all branded with the Libre logo, and treated to an Italian dinner,” as a Journal Sentinel story reported.

Libre has offered Latinos tax preparation help, wellness checkups, scholarships and food giveaways, as well as help preparing for a driver’s test, as the Washington Post reported. It has offered free flu shots, given away Thanksgiving turkeys, provided free English lessons and held seminars on how to start a business, the Times reported.

In Texas, Libre distributed tortillas, watermelons and frozen pizzas — along with bilingual Libre pamphlets, the AP reported. It handed out candy-packed Easter baskets at a San Antonio elementary school; tucked into each basket was a pamphlet in English and Spanish noting that the national debt is approaching $17 trillion.

Libre describes itself as a group advancing “liberty, freedom and prosperity.” Its “Share the Dream” program was touted in an ad featuring Campos-Dufy which calls for individual initiative.  With heart-tugging music playing and a picture of the sun shining on the Washington Monument, Campos-Duffy tells her family’s personal story, then adds: “I’m worried that government programs that are supposed to help Hispanics are actually doing harm. . . . A sense of entitlement and dependency on government is starting to take over.”

Meanwhile Libre supports many measures that hurt Latinos. Besides the anti-Obamacare stance, the group supports Voter ID laws that make it harder for Hispanics to vote, opposes raising the minimum wage (60 percent of Latinos earn less than $15 per hour ) and opposes Obama’s proposal to offer two free years of community college (23 percent of Latino students go hungry while trying to support themselves through community college).

Cristóbal Alex, president of the Latino Victory Fund, a group that works to elect Latinos, told the Post that LIBRE “talks about immigration in a positive way” but “is really doing work on behalf of the Koch brothers, who put huge money behind candidates against immigration reform.”

Christine Neumann-Ortiz, head of the activist group Voces de la Frontera, told WUWM-FM that “There’s one word to describe Libre and that word is malinche. In Spanish, that means a traitor to your people.”

Libre poured money into House races to help defeat two Hispanic lawmakers in 2014 — Gallego of Texas and Joe Garcia of Florida, both Democrats — because they supported Obamacare. Since the group’s inception, Libre volunteers have made 4.7 million phone calls and knocked on 160,000 doors to build their support among Latinos, the Times reported.

Republican presidential candidate Donald Trump’s virulent comments about Latinos have made it harder for Libre. “I am unaware of any Republican Hispanic leaders who are excited to have Trump as the nominee,” Mario H. Lopez, president of the Hispanic Leadership Fund, told the Huffington Post. “Many are refusing outright to support him in any capacity.”

Garza has said Libre will focus in 2016 on down-ticket races: “We’re going to be involved in the Senate races, some of the important 50-50 congressional races, [and] mobilizing thousands of Latinos in those campaigns,” he told HuffPost.

In the 2016 election cycle, one of it leaders told the Journal Sentinel, Libre hopes its staff and volunteers make three million phone calls and knock on one million doors.

Meantime, representatives of Libre will be submitting op eds to publications that help promote the group as advancing the interests of Hispanics. Besides the Journal Sentinel, the many other publications running these op eds include the San Antonio Express, the Las Vegas Review Journal, the Daily Caller and the Press of Atlantic City. Not one informed their readers the group was funded by the Koch Brothers.