But it does have a long history. The park's roots trace back to 1889. 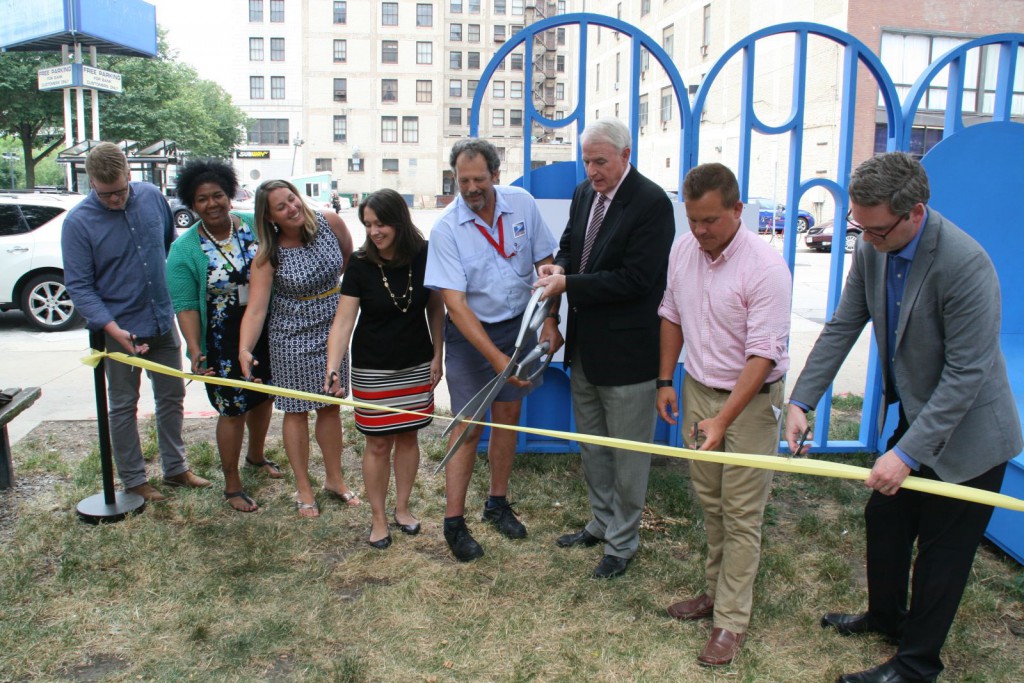 Postman Square has existed for a long time, but ask the average Milwaukee where or what it is and you’ll be met with a blank stare. The latest placemaking intervention from NEWaukee aims to change that by honoring the space’s history while simultaneously creating a downtown park worth visiting any day of the week. The firm and city formally unveiled the overhauled park today with a ribbon cutting ceremony.

The square, or more correctly, triangle, is a leftover wedge of land between W. Wells St., N. Plankinton Ave. and N. 2nd St. The small pocket park that fills the space is oriented around a central statue honoring the men and women of the 277,000 member National Association of Letter Carriers. A weird place for such a tribute until you learn the history. On August 30th, 1889 just across the street from the park in the former Schaefer’s Saloon at 808 N. Plankinton Ave., a group of 60 mail carriers, many of which were in town for a Civil War veterans convention, got together to form a union. Exactly 100 years later the union dedicated the statue and have returned to clean it every August since.

NEWaukee was approached by the organizers of the Main Street Now conference, which was held in Milwaukee in May, to host a workshop during the conference. According to NEWaukee’s Jeremy Fojut, the group thought “instead of a workshop, why can’t we building something” and reached out to the city about the park. Department of Public Works representative Karen Dettmer said “we were happy to partner with NEWaukee and step aside to let them do their thing.” Department of City Development representative Dan Casanova applauded the resourcefulness of NEWaukee in making the project happen on a small budget, noting “I want to congratulate Jeremy for enlisting free labor from the Main Street Conference.” According to Casanova, it was a hot day and Fojut successfully enlisted attendees to help carry pieces to set up the park.

Mayor Tom Barrett also praised the NEWaukee venture noting “what’s special here is you didn’t need a lot of money.” The park had a $6,000 budget, made up of matching grants from the Greater Milwaukee Association of Realtors and a city Community Improvement Project grant. Barrett noted that the small budget necessitated using more than 100 volunteers to move the redesigned park from the drawing board to reality.

The new fixtures in the park also include a mailbox to send letters to Milwaukee. NEWaukee has collected 175 letters to-date, and shares them on their social media channels using the tag #LetterstoMKE.

Tretow and Fojut both are pleased with the adoption of the park to-date, noting that they often go by during the lunch hour and see people using the new dining table.

New restaurant Brunch, which opened across the street at 800 N. Plankinton just a few weeks ago, provided free food to ribbon cutting attendees. NEWaukee hopes to work out dining service in the park with the restaurant.

Fojut notes that NEWaukee, which refers to the park as Postman’s Plot, “will take feedback from neighbors to invest more in what is used and take away what isn’t.” The physical footprint of the park itself may change.

The city intends to rebuild Wells St. in 2018 and hopes to improve the park as part of that effort. Wells St. was converted to two-way traffic in 2011, which raised the profile of the space by slowing traffic and exposing it from another direction. It also left over a “pork chop” turn lane that the city may convert into part of the park. The turn lane, which connected one one-way street to another, is now closed by a concrete barrier.

Postman Square was referenced in both the 1999 and 2010 Downtown plans as a potential area for redevelopment, and DCD employee Kyle Gast even completed a master’s thesis on the potential for the area. As DCD’s Casanova noted, the area is surrounded by a number of surface parking lots that could be redeveloped. The Germania Building, located immediately south of the park, is being converted from offices into 90 apartments, and should contribute more visitors to the park.

The park wasn’t always so overlooked: it was formerly home to a triangular building, aptly known as the Triangle bar (photo). The tavern was for a while owned by the Cream City Brewing Co., which put it up for sale in 1914. The tavern was demolished in 1919 when the space became a streetcar transfer point. In 1945, Emilie Raasch, widow of Triangle owner Julius Raasch, passed away, and the Milwaukee Journal noted that the tavern was popular during big events Downtown, when patrons would head to the roof to watch a parade go by or see election returns projected from the Germania Building. 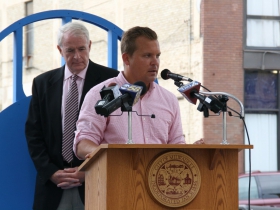 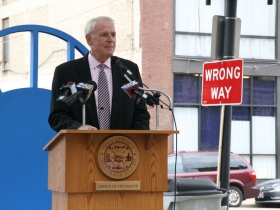 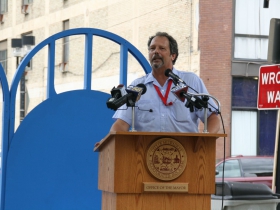 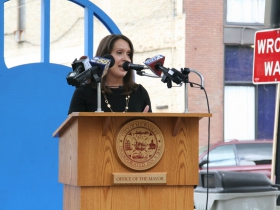 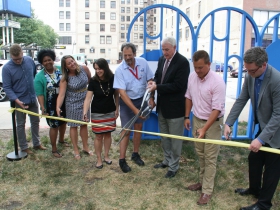 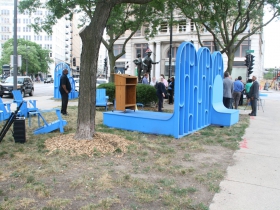