How to Bike from Milwaukee to Waukesha

A downtown-to-downtown trek is an easy ride, a lot of fun and surprisingly interesting.

With all the intra-region fighting that takes place in metro Milwaukee, you’re forgiven for thinking it’s nearly impossible to ride a bicycle from Milwaukee to Waukesha. If Milwaukee can’t get regional transit right, how could it possibly get regional bicycling setup? But in fact, going from downtown Milwaukee to downtown Waukesha is a simple 20-mile ride with almost the entire ride coming on paved trails.

Why make the ride?

It’s unheralded, but downtown Waukesha has a rapidly improving bar and restaurant scene. It’s chic and easy to dismiss the suburbs culturally, but the craft beer selection my fiancee and I encountered in downtown Waukesha was just as good as anything you would find on E. Brady St. The farmers’ market was active, there is some semblance of an emerging retail environment and we ate at several places that are all worthy of recommendation.

So how to get there?

From the Oak Leaf Trail on the lakefront in downtown Milwaukee, the street grid presents a number of options to get to the Hank Aaron Trail at S. 6th St. and W. Canal St. I prefer to take the direct route along Michigan St. to approach the trail from the north. The official Hank Aaron Trail route and to-be-completed Lakefront Gateway project would have you go through the Historic Third Ward on E. Chicago St. and into Walker’s Point along W. Freshwater Way to approach the trail from the south. Either way, you need to get to Canal St.

Once you’re on the paved trail that runs along W. Canal St. it’s smooth sailing until S. 94th Pl. The trail weaves through the Menomonee River Valley before you have to cross Canal St. just west of the 35th Street Viaduct. From there you’re riding on an old railroad corridor through the gorgeous Soldiers Home complex (worthy of a stop) and west into West Allis. You’ll go through the Wisconsin State Fair grounds before having to exit the trail at S. 94th Pl. Once the Zoo Interchange work is complete, you’ll be able to continue on here and much more of Waukesha County will become easily accessible (and you can then skip the following part of the directions).

Leaving the trail for 94th Pl., you’re entering the on-road portion of the ride caused by the Zoo Interchange work. This stretch is a bit hilly, and mixed with traffic, but is thankfully quite short. You’ll take Schlinger Ave. to S. 98th. St., veering south before you end on W. Greenfield Ave. Greenfield is the busiest street of the ride, but thankfully bicycle lanes have been added. Continue west on Greenfield over the large hill (and highway) to S. 108th St. Before going a half mile south on 108th St., you’ll come to a railroad bridge, which marks the eastern end of the West Allis Cross Town Connector trail. This paved trail will take you west into Waukesha, and will in the coming years be extended east to 92nd St. History buffs will note that its built atop one of the many former interurban corridors that whisked riders in and out of Milwaukee until 1951.

Following the trail, you’ll officially be on the New Berlin Trail and in Waukesha County when you cross 124th St. This part of the ride isn’t nearly as scenic as others, but it’s straight and relatively flat. Trailside Cycle, a bicycle shop, is located where the trail intersects with Calhoun Rd., should you find yourself needing air in your tires or Gatorade. After roughly eight miles, the trail ends near Waukesha Foundry and becomes Lincoln Ave. You can stay on Lincoln until it terminates in E. Broadway. Follow Broadway northwest less than a mile and you’re in downtown Waukesha.

What to do when you get there?

Depending on the day of the week, you might find a range of activities taking place, from live music to a farmers’ market. You’ll want to replace those calories you just burned with some beer. We enjoyed stopping at Bernie’s (try the duck confit), the rooftop at Taylor’s People Park (same owners as Taylor’s in Milwaukee), bantering with the friendly bartenders at House of Guinness, the beer and endless pizza options at Magellans, and the newly-opened Daylee Public House.

For the ride back, a number of options located just off the Hank Aaron Trail present themselves including TomKen’s in West Allis (wings, chicken and more chicken) and Oscar’s on W. Pierce St (burgers and a great back patio). The ride back also feels a lot easier, as you’re heading slightly downhill towards Lake Michigan for nearly the entire route.

While it seems at times like we live in different worlds, you’ll find a bike ride from Milwaukee to Waukesha worth the trip. 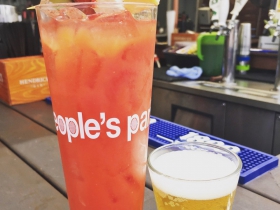 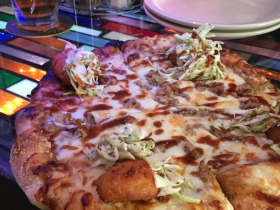 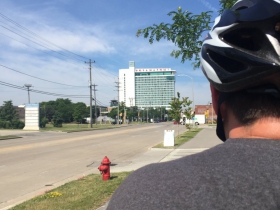 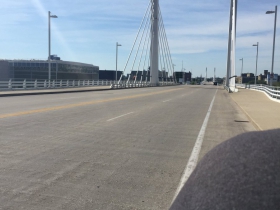 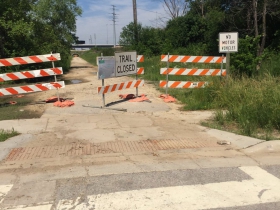 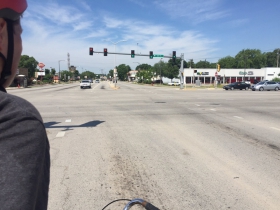 6 thoughts on “Eyes on Milwaukee: How to Bike from Milwaukee to Waukesha”