Oscar’s Is a Classic South Side Pub 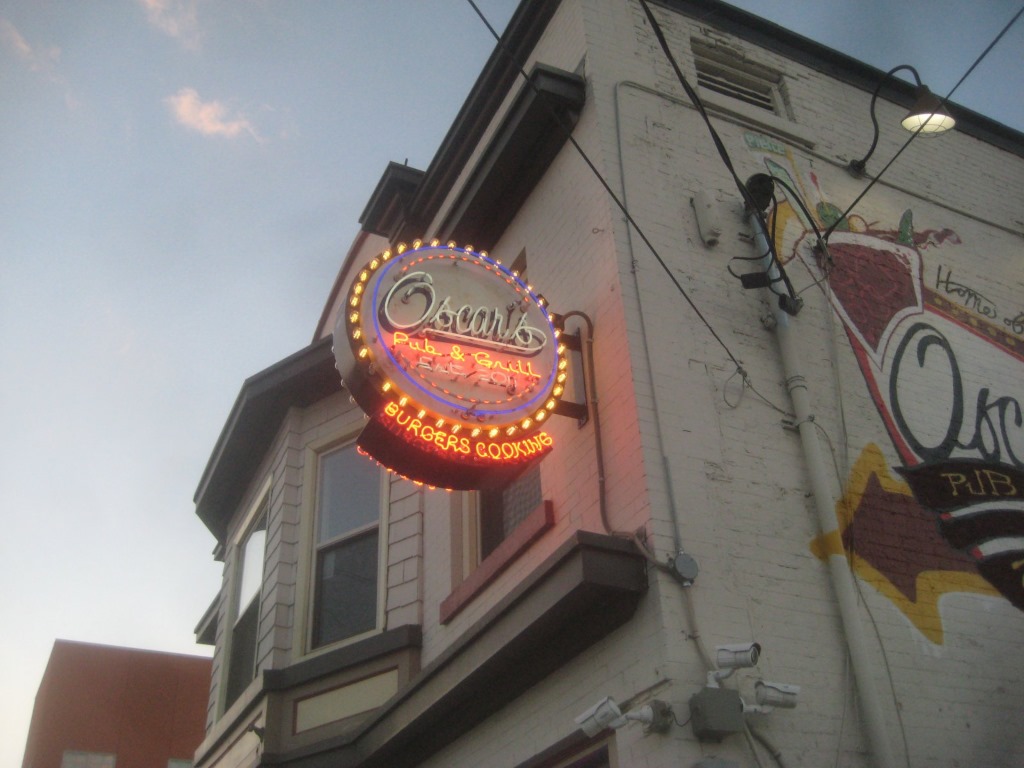 As the city expands, with the rejuvenation of such once-desolate areas as the Menomonee River Valley, and the conversion of old industrial buildings into new uses, a number of subtle changes take place, and neighborhoods once off the beaten path seem suddenly, vitally, right in the midst of the action.

We’ve seen this phenomenon at work along Brady Street, Water Street, The Historic Third Ward, Riverwest, Walker’s Point and Bay View, where old rooming house saloons and working man’s taps have become popular stops for a new generation. Many old tavern buildings that would have fallen to ruin otherwise have been rescued by the rebirth of old neighborhoods.

But the process has only just begun, while the redevelopment thus far has bypassed some worthy neighborhoods, especially north and west of downtown not far from the proposed arena.

But here and there, development has leapfrogged from time to time, and a good example of this is the vital area at the south end of the 16th Street Viaduct. Here we find Oscar’s, 1712 W. Pierce St., which has earned a city-wide reputation for its hamburgers and reasonably priced beer selection.

Oscar’s was opened in 2011 in a building constructed in 1912 near the intersection of what was then 11th Ave. and S. Pierce St. as a “store” with three flats for “Mr. Goreski” at a cost of $7,000. (City clerks were very approximate in their spelling in those days, we shall see.) The “store,” which was a tavern, was in the south half of the first floor, with a family apartment behind for the storekeeper. The upstairs was divided into two good-sized apartments. The architect was H. A. Kulas, the mason was Stanislaus Czaplewski, and the carpenter was Gustav Linkman.

Across the street was a rooming house, just off of S. Bettinger Court, a tiny stub of a street with but four addresses. There were other modest-sized, single-family houses and and duplexes, and a number of industrial properties like an old wagon repair shop representing early Milwaukee, and a just-built, much larger manufacturer of automobile parts, representing the new 20th century economy.

In 1916, “Mr. Goreski” was revealed as Mike Grzegorzewski in city records when he applied to build a $65 “shed” in the rear of the tavern located at what was then 772-4 S. Pierce St. He used the 20′ x 10′ structure as a chicken coop. In 1920, Grzegorzewski was listed as the operator of the saloon here. Then, the pall of Prohibition descended upon the land, and nothing is heard of the place until after repeal, in 1934.

On July 20th of that year, Anna Markel took out a certificate of occupancy to run the place as a “tavern.” What had been its use in previous years? she was asked. The answer: “Tavern.” We knew it all along.

By that time, the upstairs with its two apartments had been converted into 10 sleeping rooms and two baths (one tub). The bathroom with the tub was “used for ladies toilet from tavern,” and was also “used for kitchen,” by which I hope is meant used by kitchen workers.

The first-floor apartment remained in the back of the tavern, and was the home of Mrs. Markel. In March, 1938, a 22-year-old woman named Felice Mruk, “a maid,” knocked on the side door to gain admission to the tavern, and perhaps to the second floor toilet and who knows where else.

A gunman appeared, held his weapon to Ms. Mruk until Mrs. Markel, in her nightclothes, opened the door. The gunman marched the women to Mrs. Markel’s apartment, covered them with a blanket, and asked for the combination to the safe, which held $1,000. Mrs. Markel said she did not know the combination, and while the robber cased the joint, she fled, and Ms. Mruk locked herself in the bedroom. The gunman then pursued Mrs. Markel, who was barefoot and clad only in her nightgown as she ran down Pierce street to summon help at a neighboring tavern. Mrs. Markel and Ms. Mruk posed for a photograph with the safe for the next day’s newspaper.

By then the tavern was known as “Anna’s Bar,” a name it would bear for many years. In 1946 the old place got a remodeling, and for the first time there was a women’s bathroom on the first floor. That cost Leo Markel $500. In 1952 the storefront was “altered” at a cost of $2,400.  This was done by reducing the size of the storefront windows.

A giant “Anna’s” sign hung above the building, lighting the approach to the viaduct and giving the place the sort of visibility you wouldn’t get from a simple Pabst or Schlitz sign. The sign was to remain as late as 1994.

A 1967 remodeling costing $3,000 included the removal of two non-bearing partitions, the panelling of some walls, and the suspending of the ceiling. This was common in those days, when “modernization” was the only thought for old buildings. Additionally, the kitchen and living room of the first-floor apartment were converted into a dining area, while the rest of the unit became an expanded tavern kitchen and office. Meanwhile, the rooming house continued to operate upstairs.

In 1974 the assessor took a look around and noted “upstairs has 10 sleeping rooms that are in good cond. for age. Filled to cap most of the time.” The rooming house remained as late as 1988.

Today the tavern is a clean, pleasant environment. Its adjacent parking lot is quite large, and is frequently quite full as patrons head to the place for their burger fix. A rear terrace deck is closed for the season, but offers surprisingly interesting views of the Menomonee Valley as traffic speeds by on the 16th Street Viaduct.

The tavern is once again graced by its original tin ceiling, and the wooden floors are glowing and burnished. The windows have resumed their original shape and dimensions. The bar runs along the east wall of the room, and appears to be well set up. The most interesting thing on the wall is a large area papered with single dollar bills, and even larger denominations, signed by patrons over the years. At just about 6 cents per square inch, it compares favorably to the price of off-the-shelf Scalamandre hand-printed wallpaper, and is bound to keep its value longer.

The customers seem to be from all over the place, which is a good thing to see in what was once a marginal district. There are working people, students (Marquette is just across the bridge), commuters, families and burger addicts in the bar. The place is also a good spot for beer fans, what with its 37 different brews on tap. A look around the neighborhood still shows the small houses of S. Bettinger Ct., which is probably Milwaukee’s shortest street (take that, E. Boylston St.) and the other modest frame structures that have housed newcomers for generations.

Immediately to the west is the $1.625 million Clarke Square Terrace apartment building with 61 units built in 2008. W. Pierce St. has other delights, including a branch of the Urban Ecology Center and the headquarters of the Bicycle Federation of Wisconsin. To the east, on the other side of S. 16th St., the $3 million, 71 unit Paper Box Lofts continues to add to the population of this convenient, but once forgotten area. In the blocks beyond there are dozens of older taverns like Oscar’s that have not yet made the transition to the new Milwaukee, for better or worse. There are other buildings, like the vacant 1875 tavern building at 3126 W. Pierce St. that was bought by Dieter Wegner, landlord of Movida and The Noble. The time to explore is now. And, when you’re in the area be sure to check out El Rey, the grocery store on 16th St. that has done much to make living in this neighborhood inexpensive and nutritious, while places like Oscar’s are pace setters for the rejuvenation still to come. 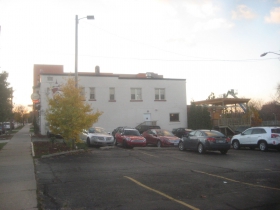 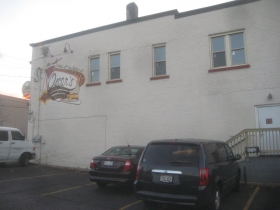 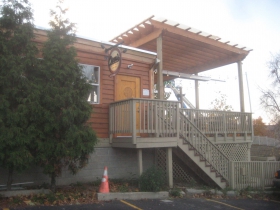 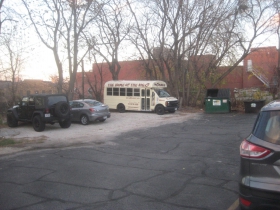 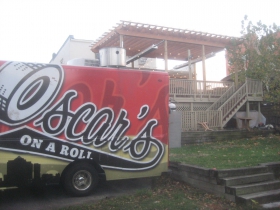 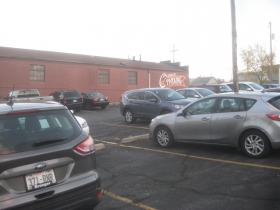 8 thoughts on “Bar Exam: Oscar’s Is a Classic South Side Pub”