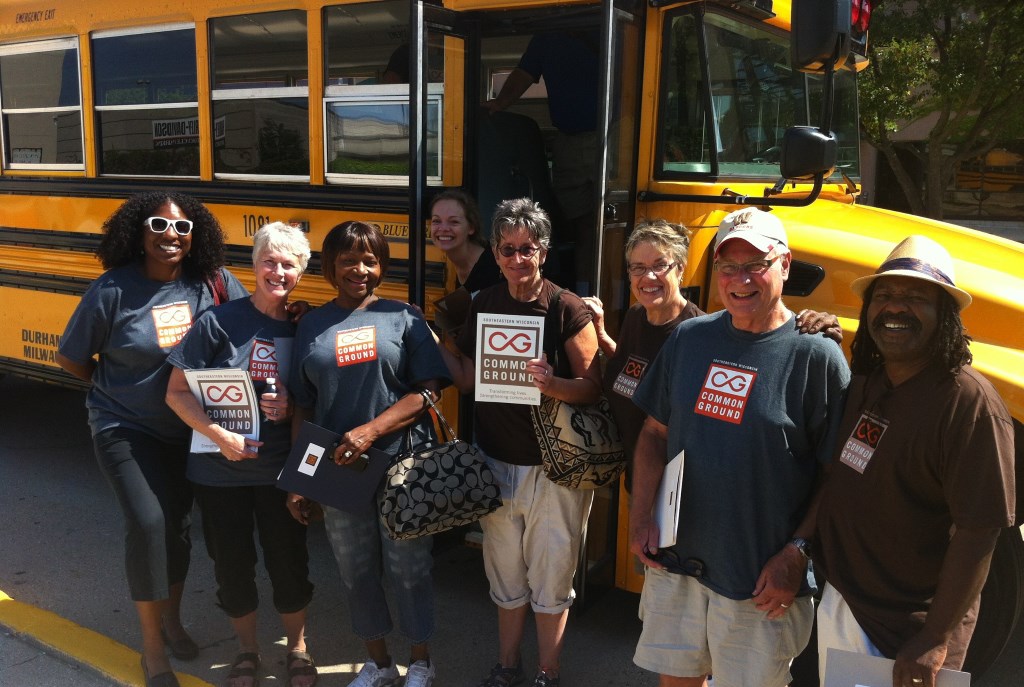 It was two years ago that members of the grass-roots advocacy group Common Ground were researching foreclosed properties in Milwaukee’s Sherman Park neighborhood. They discovered that a major holder of the mortgages was Nationstar and digging deeper, found that Nationstar was a subsidiary of Fortress Investment Group, a company founded by Milwaukee Bucks owner Wes Edens, who was demanding a huge tax subsidy for a new arena. “We never imagined we would find such a close link between a Manhattan-based Bucks owner and Milwaukee’s housing crisis,” says Common Ground’s lead organizer Keisha Krumm.

Even more surprising: Edens, they later learned, was dubbed the “new king of subprime lending” by the Wall Street Journal, which noted he had turned $124 million into $3 billion through this business. ”We were stunned,” Krumm recalls. But they proceeded cautiously, double-checking all the research until the evidence was clear: There was a direct connection between Edens and the nation’s foreclosure crisis, including in Milwaukee, where many of its under-water homes failed after its owners were sold subprime loans by Nationstar.

Common Ground soon released the information to the press and began a campaign putting heat on Edens, whose company eventually pledged to provide $30 million in funding to Milwaukee to provide support for mortgage restructuring in Milwaukee. It was a huge victory for Common Ground, and for Milwaukee, but hardly the first or the last one. The group has at times annoyed political and business leaders, but its impact on Milwaukee has been quite significant, from bringing attention to deteriorating playgrounds for children to registering voters to creating affordable health insurance to rehabilitating vacant homes. Common Ground has become a major player in Milwaukee.

The group officially called Southeastern Wisconsin Common Ground was constituted in 2008 as a 501(c)3 nonprofit. Thirteen faith-based organizations had joined forces in 2004 to raise $750,000 in seed money to hire an organizer and lay the groundwork. As founder Bob Connolly recalls, “We knew we needed to build a strong and powerful organization to deal with some of these long-standing problems.” Common Ground’s organizing model has been used for 75 years by the Industrial Areas Foundation. “It’s an international organization and we are one of 65 sister organizations.

The group grew its membership to include “congregations, religious groups, small businesses, nonprofits, schools, unions and neighborhood associations,” according to their website. That includes 50 organizations representing more than 44,000 members in the four-county metro area. While the group focuses on city problems, Common Ground connects people from different sides of town and between cities and suburbs. That broad coalition, in turn, helps create leverage.

According to Krumm, who joined Common Ground as its leader in 2011, a major goal is “to build a people’s organization to combat the constant eroding of public life and citizens having no power.” Krumm is among four full-time staff members who work with hundreds of volunteers. Connolly says Common Ground teaches its members tools for solving problems collectively identified.

The group has from the beginning taken on David-versus-Goliath efforts. Early on the group was working on the problem of foreclosed homes in the Sherman Park neighborhood and decided to target the banks who had backed the subprime lenders. These included Deutsche Bank, Wells Fargo, U.S. Bank, JP Morgan Chase and Bank of America.

“We maintained they had destroyed these homes with the support they gave to subprime lenders,” Connolly recalls. “We first tried to talk to the banks about moral issues and they ignored us. So we embarrassed them. We would have actions in front of the dilapidated homes the banks owned. We went to the stockholders meetings of the banks.”

Wells Fargo began to negotiate with Common Ground, but Deutsche Bank held out. “So we went to their stockholders meeting in their home office of Frankfurt. We went to Frankfurt two years in a row. We embarrassed the company in the German media.”

Ultimately all five companies choose to negotiate and by 2011, they had together pledged $33 million to help Milwaukee deal with the foreclosure problem. With that money Common Ground has been steadily rehabilitating homes in Sherman Park. “We’re now down from 300 vacant homes to 65,” Connolly says.

Randy Jones recently bought one of the foreclosed homes in Sherman Park that is now back on the tax rolls. He told Milwaukee Neighborhood News Service that Common Ground’s home-rehabbing efforts will have a long-term positive effort and will “change Milwaukee as a whole.”

Common Ground emphasizes being strategic, undertaking only campaigns with defined outcomes considered achievable. Intensive research, sometimes for years, informs each effort. They employ strong messaging and social media. They tackle small or large issues they believe “will make a difference in people’s lives,” as their website notes.

Another big issue for Common Ground has been children’s recreation. In June 2013, the group released a study showing that that two-thirds of the outdoor athletic and recreational facilities at public schools throughout Milwaukee County were in “terrible, poor or fair condition.” The group demanded that if taxpayers were going to spend $250 million on a new arena for the Milwaukee Bucks, the plan should also allocate at least $150 million for children’s athletic facilities.

Dubbed the Fair Play initiative, it was about “changing the conversation so it was not just about the arena,” Krumm notes.

“We did not want to stop the arena,” says Common Ground volunteer Jennifer O’Hear. “We are pragmatists. We wanted to talk about how public money is being spent.” The idea was to get a package deal, with at least some funding going for kids’ recreational facilities.

In October 2014 Common Ground enlisted New York Times reporter and columnist Michael Powell to tour Milwaukee’s athletic fields and city playgrounds. That evocative story contrasted the dire needs of the city’s children with the multi-millions to be made from owning the Bucks and a taxpayer-subsidized arena by billionaires Wes Edens, Marc Lasry and Jamie Dinan, all Wall Street tycoons. Once again, Common Ground had used the media to embarrass wealthy business people and make a moral point.

This angered many in the community. “That issue was radioactive,” O’Hear says. “We were told we weren’t being nice and were advised to ‘wait our turn.’” Metropolitan Milwaukee Association of Commerce President Tim Sheehy accused the group of “demagoguery.”

State, county and city officials eventually approved the Bucks’ bailout, yet the Common Ground campaign drew attention to the issue of the county’s deteriorating recreational facilities. Since its study was released, Milwaukee Public Schools has spent $20.5 million on various upgrades to athletic fields, including tearing down and replacing South and Custer stadiums.

Another outcome Common Ground may have catalyzed is MKE Plays a public-private initiative launched by Ald. Michael Murphy in April 2015 to renovate 12 of the city’s deteriorated playgrounds. The city maintains 64 playgrounds and has committed $500,000 to the project over four years, and Murphy has raised $1.3 million in private dollars. He denies any connection, but it’s undeniable that MKE Plays was created after Common Ground dramatized the issue.

Another impact from Common Ground’s attention to the Bucks arena issue was the $30 million commitment by Nationstar to help struggling Milwaukee homeowners stay in their homes. That victory came only after Common Ground embarrassed Edens and Nationstar in the media and after Krumm and O’Hear, in the spring of 2015, traveled to Nationstar’s shareholders meeting in New York to dramatize the issue.

Also embarrassed was then-Ald. Willie Wade, who represented the district most affected by foreclosures, and was a huge fan of the Milwaukee Bucks who favored the arena subsidy. He accused Common Ground leaders of “acting like a bully.” Wade said the Bucks deal should be handled by “the people who are elected. Common Ground is out of order to think they can come in and circumvent that.” (Wade was among 12 Common Council members who approved the city’s arena deal; three voted against it. He retired in February to become vice president of the Milwaukee Area Workforce Investment Board, Inc. When asked to comment for this story, Wade was “not at all interested.”)

City officials did not include Common Ground in negotiations that ultimately resulted in Nationstar making the $30 million pledge, but Common Ground was invited to participate in the deal’s announcement, where Mayor Tom Barrett praised Common Ground for their role as a “strong grassroots component.” Nationstar’s chief customer officer, Dana Dillard, told the press it was ‘a first’ for her company to partner with a city in this way. As Urban Milwaukee editor Bruce Murphy concluded, “None of this would have happened without the pressure by Common Ground.”

Some of those needs are reflected in Common Ground ‘s latest campaign, “MKE Neighborhoods Now,” focusing on securing $80 million over the next four years for a range of projects in blighted areas. They’re seeking funding in the city’s 2017 budget for an indoor soccer facility on the South Side (a project on the boards for 15 years), improvements to outdoor athletic facilities at Rufus King and Washington high schools, revitalization  of Center Street from N. 35th  to 60th Streets in Sherman Park, and matching grants for home improvements in several districts. Those projects total $23 million.

But the group has learned to persevere, no matter the criticism, no matter how powerful the critic. “We’re not quitting or going away,” Krumm declares. “We’re not giving up on our kids.” Which likely will make Milwaukee a better, and certainly a more interesting place.

Virginia Small is a longtime journalist, a book author and former senior editor of a national magazine.

2 thoughts on “The Power of Common Ground”