Wisconsin cut higher education by more than all but one state in America.

By Jon Peacock, Wisconsin Budget Project - May 31st, 2016 10:48 am
Get a daily rundown of the top stories on Urban Milwaukee

In contrast to Wisconsin, most states have been taking advantage of the national economic recovery to increase support for higher education and restore some of the funding cut during the recession. The bar graph from a new report by the Center on Budget and Policy Priorities (CBPP) shows that Wisconsin was one of just 11 states that cut its support for higher education in the current fiscal year, relative to fiscal year 2015, and almost all of the other cuts were far smaller. 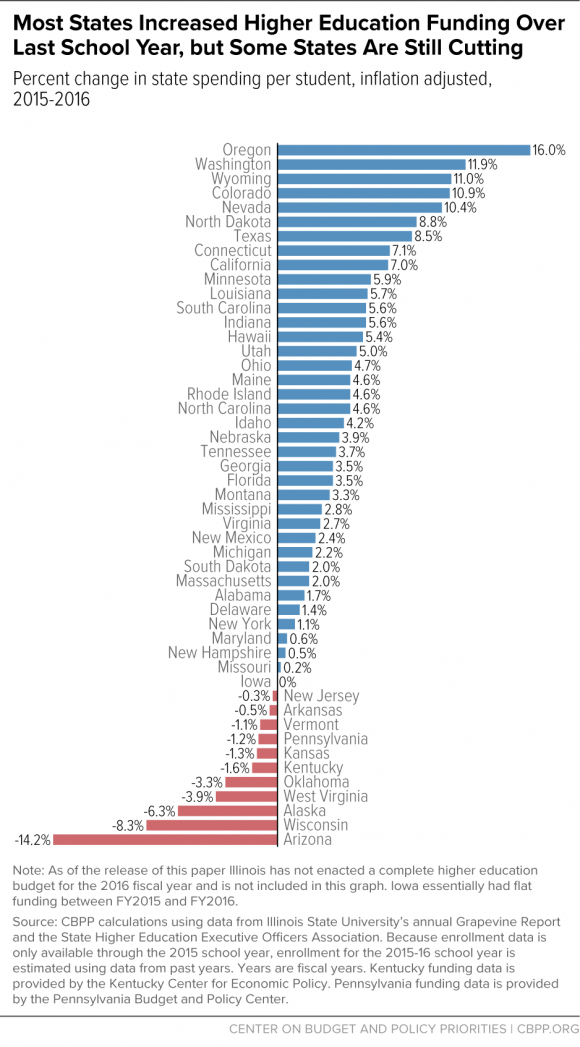 Most States Increased Higher Education Funding Over Last School Year, But Some State are Still Cutting

Since 2008, Wisconsin cut its support for higher education by 25% per student, according to a CBPP blog post yesterday. That post by Michael Mitchell is a follow-up to the CBPP report, which indicated that Wisconsin’s spending on higher education had increased 3.3% from 2008 to 2016, but didn’t look at the full picture.

The different numbers reflect the confusion that arises when state policymakers cut property taxes by increasing state aid and requiring comparable cuts in local tax dollars. That’s what the state did in the 2014-15 fiscal year for the Technical College System. For someone tracking spending over time, a new $406 million per year state appropriation appears to yield a large increase in spending for higher education, but since the technical colleges are required to use the new state funds to cut the same amount of local support, there’s actually no net increase in funding for the technical colleges.

After taking a look at the revenue swap, the CBPP analysis concludes:

“…if you exclude the shifted funding responsibility for the technical college system — which appears as additional state support — funding for Wisconsin’s public two- and four-year institutions has fallen by roughly 25 percent per student since 2008.  This includes large-scale higher education cuts from Wisconsin lawmakers in 2015, including a $250 million cut to the University of Wisconsin system that caused harmful ripple effects on many of the system’s campuses.”

The deep cut to state support for higher education in Wisconsin is far more obvious if one focuses just on the UW System. However, Governor Scott Walker is trying to paint a different picture by looking at total revenue for the UW System, including tuition, gifts, grants, and federal funding. He recently said on a radio show that “the University of Wisconsin System budget is the biggest it has ever been.” Although figures from the Legislative Fiscal Bureau (LFB) show there’s some truth to that statement, there are also a couple of major problems with the Governor’s effort to downplay the significance of the UW System cuts.

The first problem is simply that the Governor’s claim doesn’t account for inflation. LFB figures that adjust the amounts for inflation show that total UW System revenue from all sources was higher in four of the five previous years.

The much bigger problem with the Governor’s defense of the cuts is that the different revenue sources aren’t interchangeable; donations that finance new athletic facilities are little consolation to students who have to return an extra year because they can’t get into some of the classes required for their major. A large federal grant for research may be welcome news for some faculty and grad students at UW Madison, but does little to mitigate the effects of the cuts for undergraduates in Madison, much less those on other campuses. (And some of the grants could be at risk if star faculty members go to other universities.)

The Governor’s argument is a bit like making a large cut in Social Security benefits for seniors and then defending that cut on the basis that total income for all seniors has increased – thanks to an upturn in the stock market and the effects of demographics on total pension payouts. Just as those trends are of no consolation for most of those who rely on Social Security, increases in total revenue for the UW System do not change the fact that the amounts available for instructional purposes are taking a large hit. (See, for example, this article about the effects at UW Stevens Point and our graphic illustrating some of the effects across the state.)

One thought on “Wisconsin Budget: State A Leader in Higher Education Cuts”