How CEOs Leave Workers Behind

CEOs Rich Meeusen and Tim Sullivan get rich while workers get nothing. 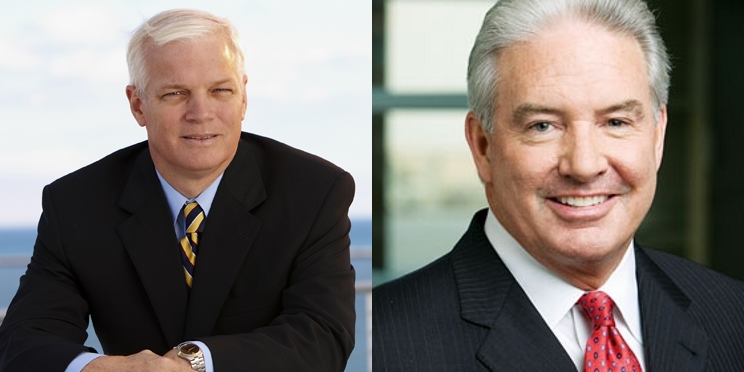 It seems the board members of Badger Meter Inc. are so worried about what will happen to the company’s chief executive Rich Meeusen that they created a plan that to assure him a payout of $8.4 million if the company were to change hands and he departed. “Meeusen, 61, would receive three years’ worth of salary and annual incentive compensation,” as the Milwaukee Journal Sentinel’s Kathleen Gallagher has reported.

And what of the workers, should such a sale occur, what will be their reward? If it works like any other golden parachute plan for executives, they can expect nothing.

The plan was created by the compensation committee of Badger Meter’s board of directors, and they have every reason to be concerned about pleasing Meeusen. For starters, the company Meeusen runs pays them an annual fee for sitting on the board. Badger Meter board members were paid $70,000 per as of 2010, but that has surely risen since then.

Moreover, three of the four members of the compensation committee are members of the same club — current or former CEOs — who tend to sit on each others corporate boards. Meeusen. That includes Gale Klappa, the recently retired CEO of We Energies, who earned $59 million in four years, from 2010 to 2014, and another $13.8 million in 2015. Todd Teske, CEO at Briggs & Stratton Corp, garnered  $23.7 million from 2011-2015.  And Steven J. Smith, the former CEO of Journal Communications, got annual paychecks as high as $2.2 million and got a golden parachute of $9.1 million for selling his company, which led to worker layoffs at his company.

All three are used to seeing huge pay in the corporate suites, part of the trend that has seen CEO pay skyrocket by 997 percent since the end of the 1970s while average worker pay remained about the same in real dollars.

As for Meeusen, he’s earned $8.6 million in compensation over the last five years. “Making a lot of money made me happy,” he told Milwaukee Magazine. “I’m not going to deny it, and I’m not going to apologize for it.”

Meanwhile, he’s been steadily throwing Milwaukee workers out of jobs, moving the employment to non-union shops. “For the last 10 years, I have systematically reduced employment in Milwaukee, from 350 union workers 10 years ago to 120 today,” he told the Milwaukee Business Journal. He threatened to move more than 100 manufacturing jobs from Brown Deer if “right-to-work” legislation failed to pass in Wisconsin. The law passed.

“Union contracts often restrict flexibility and that hurts productivity,” he told the magazine. But union contracts also mean better pay for workers, and that’s a problem. The goal is to cut worker costs to the bone, while aggressively raising CEO pay, which is why Meeusen’s board worried about a golden parachute for only one employee at the company.

Longtime CEO Tim Sullivan, by contrast, was always friendly to the union that represented his workers at Bucyrus International. “Sullivan said he preferred the experienced United Steelworkers (USW) teams for financial reasons,” as Dominique Paul Noth wrote for In These Times. Indeed, their work, along with Sullivan’s terrific leadership, helped the company grow explosively, as annual sales increased from $280 million in 2000 to $3.65 billion in 2010. The stock appreciated more than 1,500 percent since an initial public offering in 2004, the Journal Sentinel reported.

And Sullivan benefitted handsomely, earning $32.5 million in compensation for just five of the 11 years he served as CEO. Then, in 2011, he wangled a deal to sell the company to Caterpillar Inc. for $7.6 billion, for $92 a share, a 32 percent premium over Bucyrus’ current per-share value. As part of the deal Sullivan got an estimated $29 million cash payout, and total compensation of some $48.5 million.

What did workers get out the deal? “On March 28, mere days before negotiations for a new contract were set to begin, Caterpillar announced it would lay off 300 workers at the South Milwaukee plant, almost 40 percent of the blue-collar workforce,” Noth reported.

After Caterpillar laid off another 260 workers in 2013, Sullivan finally broke his silence on the issue in 2013, as the Business Journal reported: “The big picture is it should never happen,” he said. “I had a rule — no layoffs. I could not spend $7 million per annum training and then lay people off and put them on the street. That’s just crazy.”

But the layoffs continued and by 2015 the number had reached 450 workers gone or about 55 percent of the workforce in the old Bucyrus plant in South Milwaukee.

Two weeks ago Caterpillar Inc. said it was moving engineering and technology jobs from its mining equipment division in South Milwaukee to Tucson, Ariz. as the Journal Sentinel reported. Sullivan, who had once blamed Caterpillar for the layoffs, now offered the novel theory that the export of jobs is because “Arizona embraces and supports their past and current mining heritage, whereas Wisconsin has rejected and even vehemently protested our mining heritage.”

The idea that a company like Caterpillar, which sells mining equipment across the globe, would make its location decision based on whether one iron mine was built (which, by the way, the Republican leadership of Wisconsin embraced and supported) in this state is absurd. More likely the move was about switching to non-union jobs, and gaining a huge government subsidy.

The Rio Nuevo Board, a special taxing district for Tucson, will “spend $52 million as part of an incentive package to help Caterpillar consolidate its surface mining division to Tucson” a story by Fox 6 News in Tucson reported. “This is the most aggressive package the state has ever done,” Rio Nuevo Board Chair Fletcher McCusker said…”Rio Nuevo will also finance the construction of a new headquarters which will cost up to $50 million.”

No, these details were not reported by the Journal Sentinel. And if this had happened on Gov. Jim Doyle’s watch, talk radio would be screaming that Doyle had lost the Caterpillar jobs. There was no word about the loss by Gov. Scott Walker, who has repeatedly said attracting and retaining businesses is a priority. But then, these were union jobs.

It’s worth noting that many of these layoffs were probably related to the drop in demand for mining and mining equipment. But those kinds of economic changes are exactly why CEOs like Meeusen, Smith and others are given the protection of golden parachutes. Sullivan knows how it works when companies buy other companies; one of the first things they do is realize “efficiencies” by laying off workers.

To prevent this sort of thing, Paper Machinery Corp. CEO Donald Baumgartner created an employee-owned company to protect his workers and assure they fully benefited from the value they brought to the company. Sullivan’s comments suggest he valued his workers as much as Baumgartner. But not enough to forego the $48.5 million payday he got from selling the company.  He did provide value for stockholders, who gained from the premium they received on stock they held. But no return for workers. At the very least, Sullivan might have taken half that big pay day and handed out bonuses to the workers who helped him gain all this wealth.

But Sullivan and Meeusen and Klappa and Smith, like CEOs across America, believe only they deserve big payouts for the work they do, while they leave all the workers — once the backbone of the American middle class — ever further behind.

17 thoughts on “Murphy’s Law: How CEOs Leave Workers Behind”