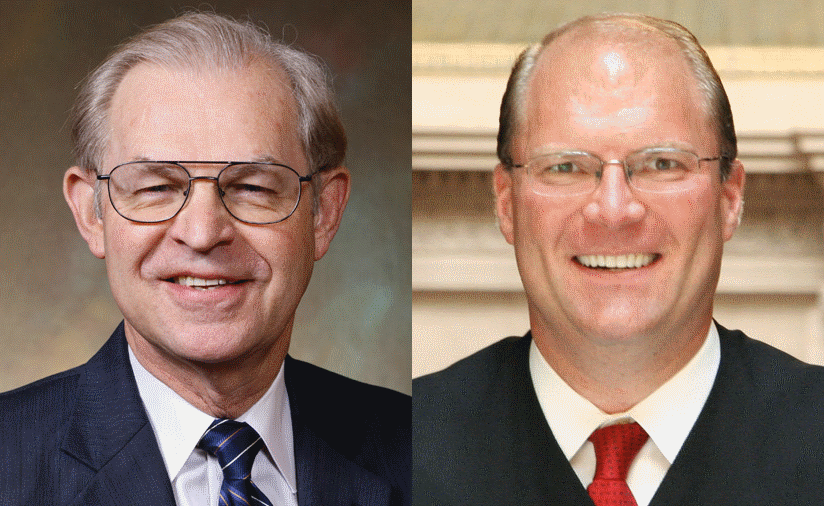 Although the US Supreme Court has not yet posted these documents on its web site, a heavily redacted 60 page copy has been posted on several web sites. The petition references also an appendix exceeding 673 pages, which is not yet available, but will probably also be heavily redacted. The DAs bringing the appeal are John Chisholm of Milwaukee County, Ismael Ozanne of Dane County, and Larry Nelson of Iowa County. They are joined by three Assistant District Attorneys–Bruce Landgraf and David Robles of Milwaukee and Matthew Moeser of Dane. 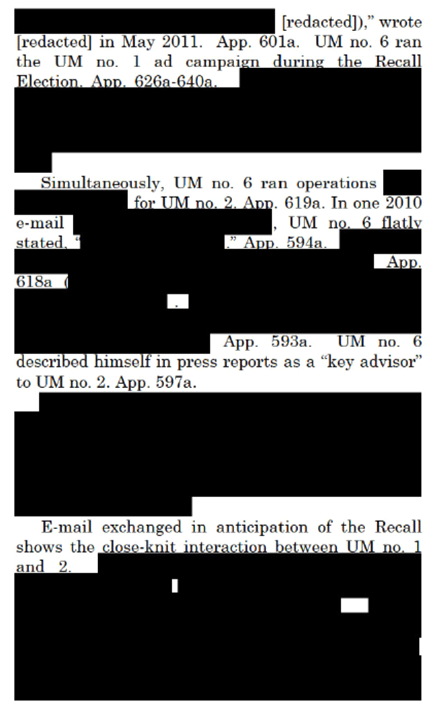 The number of redactions in the petition is striking. The image on the right shows page 7 describing the activities of several of the eight “Unnamed Movants” (“UM”), the term for people or groups under investigation. Although the redacted petition does not name the UMs, it appears that UM no. 1 is Scott Walker’s campaign committee, UM no. 6 is R. J. Johnson and UM no. 2 is another, ostensibly independent committee run by Johnson. Thus Johnson was running both the Walker campaign and a supposedly independent outside group. This suggests a level coordination that was illegal at the time under Wisconsin law and is still illegal under federal law, but was legalized by the state Supreme Court.

It is also striking that the redactions are not limited to alleged coordination with the Walker campaign. In his blog, University of California professor Richard Hasen comments that he had never seen so many redactions in a writ of certiori.

A number of redactions relate to Wisconsin Supreme Court Justices Prosser and Gableman. One has to wonder whether Justice Prosser’s surprise decision to retire in mid-term is related to the investigators unearthing evidence about his activities. If this evidence had been previously disclosed there would be no reason to redact it.

The appeal by Chisholm and company presents two main issues. The first is the question of recusal by judges when they have a conflict of interest. In its Caperton decision, the US Supreme Court overturned a decision by the West Virginia Court. For the first time the US Supreme Court said that very large campaign spending by one of the parties created a presumption of bias. In this case the president of Massey Coal, Don Blankenship, spent close to $3 million to support the election of Justice Benjamin who subsequently voted in Massey’s favor. 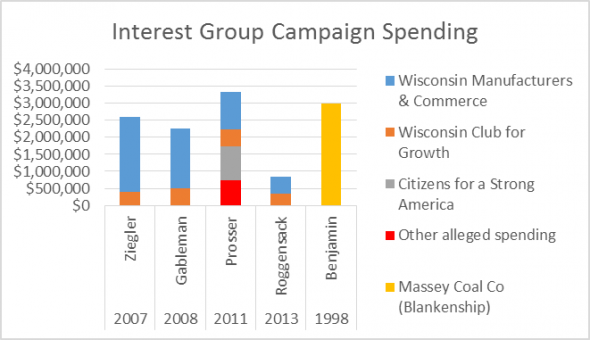 Among the groups investigated for spending in coordination with the Walker campaign were Wisconsin Manufacturers and Commerce, the Wisconsin Club for Growth, and Citizens for a Strong America. These groups also spent heavily to support the elections of the four state justices who voted to shut down the investigation. The graph to the right compares their spending to Blankenship’s. It seems clear that spending on at least three of the justices reached levels that triggered the US Supreme Court’s disapproval in the Caperton decision.

Most of the information on Wisconsin spending stems from estimates by the Wisconsin Democracy Campaign. These numbers are likely to underestimate the actual values; they are largely based on reports by radio and television stations to the Federal Communications Commission. The John Doe investigation arrived at a higher number for spending on Justice Prosser. I show this increase as “Other alleged spending.”

Based on the magnitude of the outside spending, why didn’t the prosecutors also challenge the participation of Justice Annette Ziegler? Not only was she the beneficiary of heavy spending by the outside groups, but she showed her bias in her willingness to repeat unproven assertions about the conduct of the Doe investigators from the National Review and Wisconsin Watchdog.

A possible answers lies in the redactions. The petition contains two heavily redacted pages about fundraising for the Prosser campaign. One comes away with the impression that many of the people alleged to have coordinated with the Walker campaign also played a role in Prosser’s re-election, which came at roughly the same time. 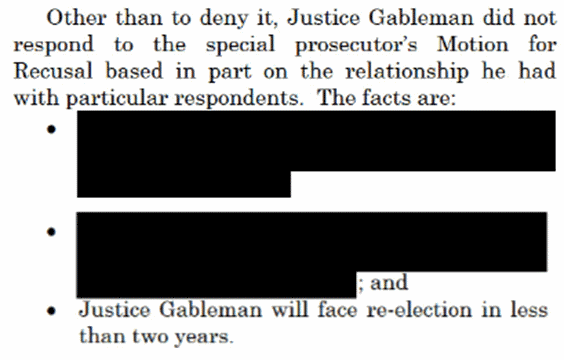 The petition also goes into some detail on Justice Gableman. In this case, it is even harder to extract what is alleged. To the right are the bottom of the petition’s page 30 and the top of page 31. Of the three facts alleged, only the third—that he faces re-election in two years– survived the redaction process. There is no hint of what is redacted but clearly the district attorneys believed the US Supreme Court justices would find them relevant.

Up until now, there have been two issues that suggest the justices should have recused themselves:

However, the petition, even with its heavy redactions, presents a third issue: the possibility that Prosser and Gableman had themselves engaged in behavior that made them targets of the investigation. If so, their interest went well beyond that of protecting their friends and political allies, and involved protecting themselves from the probe.

This would help account for the Wisconsin’s Supreme Court’s attempts to cripple the appeal to the US Supreme Court. Most notable is its refusal to allow Reed Smith, who won the Caperton case, to work pro bono on the petition by Chisholm’s group. As their petition notes, “The state supreme court denied the request, refusing to recognize the right of the district attorneys to be represented by counsel. The court wrote that no need had been shown by the petitioners, whose appellate experience is limited to traffic and misdemeanor matters in the state court of appeals.”

It might also explain the weakness of the Wisconsin Supreme Court’s Doe decision. Despite extensive quotations from US Supreme Court decisions, it arrived at a conclusion counter to those decisions when it came to coordination between candidates and outside groups. As Hasen comments, it “mangled U.S. constitutional campaign finance law to let elected officials like Gov. Scott Walker coordinate with outside groups on an unlimited basis with groups taking unlimited campaign contributions from whatever source so long as the outside groups avoid express words of advocacy like vote for or vote.”

In a way, the Wisconsin Supreme Court’s decision is even more of a challenge to the conservative justices on the US Supreme Court than to the liberals. Time and again, in their 5-4 decisions overthrowing other restrictions on campaign spending, the conservatives refer to the prohibition on coordination as a bulwark against corruption. For example, here is Justice Anthony Kennedy, writing for the conservative majority in the Citizens United case:

The appearance of influence or access, furthermore, will not cause the electorate to lose faith in our democracy. By definition, an independent expenditure is political speech presented to the electorate that is not coordinated with a candidate.

The Buckley Court, nevertheless, sustained limits on direct contributions in order to ensure against the reality or appearance of corruption. That case did not extend this rationale to independent expenditures, and the Court does not do so here.

A decision by the four remaining conservatives to now accept the Wisconsin court’s interpretation of the First Amendment would vindicate those critics who believed that the ultimate goal of the conservative US justices is an electoral scheme in which anything goes, that the reference to a lack of coordination was more a fig leaf than a sincere effort to find the right balance between limiting speech and preventing corruption. The liberals, on the other hand, never believed that the prohibition on coordination, by itself, was sufficient to prevent corruption and other abuses.

The fact that two of the Wisconsin justices voting to close the John Doe investigation appear to have become targets of that investigation helps explain the ferocity of that court’s actions against the investigators. It may also help explain why the state court was willing, in Hasen’s words, to “mangle” constitutional law.