Schusters had department stores for 80 years in Milwaukee and made deliveries to homes. 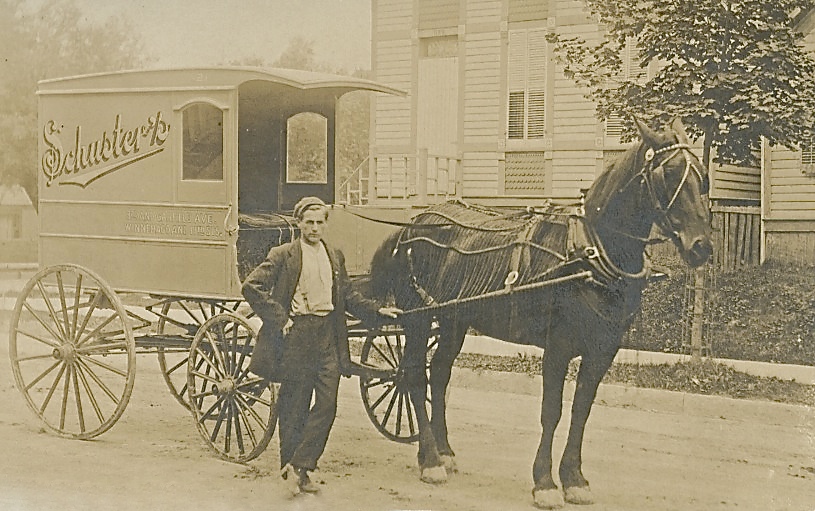 The “big three” department stores in downtown Milwaukee for many years were Gimbels, Boston Store and T.A. Chapman’s. But those who remember the years before 1970 will recall another name: Schuster’s. Actually, Chapman’s (which began in the 1850s) is the only store that originated before Schuster’s, which first opened in 1883 at 12th and Vliet. This was four years before Gimbels would arrive in this city and 17 years before a department store founded here in 1897 adopted the Boston Store name (in 1900).

This postcard (c. 1908) shows one of Schuster’s horse-drawn delivery wagons. As last week’s column noted, horse-drawn wagons continued to be used for commercial delivery in cities like Milwaukee, well into the 1920s.

Unlike the other three department store chains, Schuster’s would never have a downtown store, preferring outlying neighborhoods instead. In 1886 they would open a second store at 3rd and Brown and in 1914 their largest store would open at 11th and Mitchell. All three stores were located on the route of the Milwaukee Streetcar system, making it very convenient for shoppers in the days before the automobile became the main means of transportation.

“Until Schusters expanded by building ‘Capitol Court’ (60th and Capitol drive) and opening a store in Madison, it was known by the moniker of ‘The Three Schusters Stores’ by Milwaukee shoppers,” as one account notes. Schuster’s also added a store at Packard Plaza in Cudahy.

“In 1958 Schuster’s reached $50 million in sales, its high water mark,” as writer Paul Geenan told told Onmilwaukee.com. Schuster’s was more innovative than Gimbels, he noted: “Schuster’s issued Schuster’s Stamps, which were given out at over 300 butcher, grocery, hardware stores and gas stations. They issued “Charga-Plates,” metal plates that customers used to make purchases, tied some promotions to local charities and experimented with the central check-out concept.” Schuster’s also created the Schuster Band, whose musicians gave concerts.

But Schuster’s was best known for the Billy the Brownie elf character created in 1927 to promote their annual Christmas Parade in downtown Milwaukee. The character “became a Christmastime radio mainstay thanks to Schuster’s marketing department and WTMJ radio,” as a Milwaukee Journal Sentinel story recounted.

As for the annual Christmas parade, the story noted, “Tens of thousands came out the first year, and pretty much every year after. Newspapers estimated the crowds typically at 200,000 to 250,000 people, whatever the weather.”

In 1962 arch-rival Gimbels would purchase all of the stores and rename these locations Gimbels-Schusters, a name that would last until 1969 when the name Gimbels would win out.

Over time all of these stores would close. The Vliet store was the first to shut its doors in 1961. Third St. would last until 1970 and the others would close in 1984. With the exception of the Capitol Court location all of the other Schuster’s buildings still survive. The Mitchell St. location remains the most intact. Today Schuster’s is just another retailing name from Milwaukee’s past.