But stick with the restaurant’s Salvadorian dishes made with pupusas. 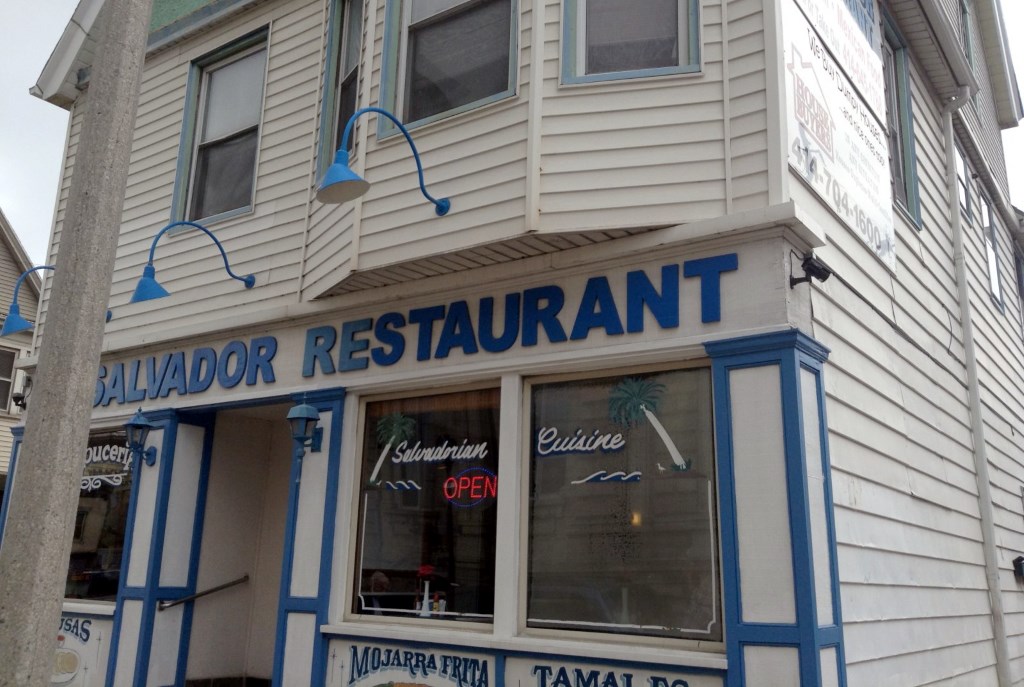 It’s easy to find El Salvador Restaurant at the corner of W. Lincoln Ave. and S. 6th St. Look for the dome of the Basilica of St. Josaphat, cross the street, and you’re there (though you might have to avoid a panhandler).

The owners of this small restaurant named after El Salvador, the smallest and most densely populated country in Central America, serve authentic dishes from their homeland.

Inside the immaculate dining area, 10 tables and a couple of booths often fill up at lunchtime as we discovered at noon on a Saturday. Two barely audible TVs hung high on the back wall provided entertainment for a few customers who watched a soccer match. It’s a bright cheerful space with plenty of colorful art to look at, flowers, albeit fake, on every table, and street side windows that face the Basilica.

The three-page menu lists primarily Salvadoran specialties with a few Mexican and Honduran dishes that filled out the menu, but added little to admire based on my sampling from those cuisines.

From the short list of dishes from Honduras I tried Baleada Regular, a flour tortilla folded around avocado, beans, scrambled eggs, and melted cheese. The tortilla, larger and thicker than a Mexican tortilla, held a gloppy mess, like a combination of a sloppy taco and a burrito that didn’t work out very well.

From Comida Mexicana, the Chicken Tacos, equally mediocre, sent me to the Salvadoran part of the menu where I should have been in the first place.

The restaurant also bills itself as a Pupuceria, The Palace of Pupusas, and a pupusa is a thick handmade corn tortilla that loosely relates to the Mexican chile relleno. Unlike the Mexican version, there’s no stuffed pepper, only masa wrapped around the filling. A pupusa, fried on both sides on a griddle, is traditionally served with Curtido, pickled chopped cabbage lightly seasoned with oregano. I ordered one with cheese and one with Loroco, a Salvadoran vegetable that resembles a skinny green bean. Both the cheese-filled and the one with the loroco were crisp and delicious, almost addictive. Tiny slices of loroco didn’t add flavor, just color. The cheese version had bits of fried cheese on the outside, like the crust of a baked mac and cheese.

The spicy vinegary Curtido added fire, or at least the bite I took that was immediately adjacent to a little red pepper. It was an unexpected tongue-burner.

The menu lists eight pupusas to choose from including Calabaza, translated as “cookbook” on the menu. I checked. Calabaza means squash. Others are stuffed with pork rinds, beans, chicken, and steak.

From Comida de Mar, Shrimp Saute with Garlic turned out to be a palate-pleaser. The shrimp tasted of garlic, enough to let me know it was present, but not so much that it overwhelmed the large pile of succulent shrimp. Hidden under the shrimp, fried potatoes added depth to the dish, while one bite from the accompanying grilled poblano pepper cleared out my arteries. The dish came with some uninspired rice dotted with bits of carrot and corn, and delicious, smooth, black-and-brown bean puree.

Carne Asada con Casamiento, or grilled steak with rice and beans, has an added twist. Casamiento, the Salvadoran version of those common accompaniments, combines rice and beans that had been cooked separately. What makes this interesting is “casamiento” in Spanish means wedding, or marriage. That implies the once-separate beans and rice met,  become one on the plate, and lived on in matrimonial harmony.

Even though the menu defines Salpicon as “boiled beef’,” mine was grilled. The chef chopped the steak into quarter inch portions, mixed it with chopped onion, radish, and cilantro, and piled it on the plate. There was easily enough meat to serve two or even all three of us at lunch. The tender beef minced into tiny pieces lost none of its beefy flavor in the dicing.

The disappointment on the Salvadoran menu was Lomo Saltado, only because it failed to deliver the filet migon we expected from reading the menu. (Actually it read “filled migon.”) This mix of onions, green peppers, and potatoes featured strips of grilled steak that were more like strip steak: the meat was flavorful, juicy, but well-done and chewy. It could have been improved by the addition of some special herbs to liven this basic stir-fried mix.

More adventuresome diners who don’t mind bones might want to try the Mojarra, a whole fish available three ways: with garlic, fried, or enhanced with a hot sauce.

Since El Salvador opens at 10:00 a.m. every day, they offer a few breakfast options including a Tamale that has more masa, or corn meal crust, than filling. The bite of chicken inside was tasty but it needed more meat to call it a tamale. The masa had a different flavor from the Mexican tamales I’m familiar with, perhaps because it was wrapped and steamed inside a plantain leaf instead of a corn husk.

Bottom line here. The owners painted Pupuceria on the outside of the building for a reason. That’s where they shine. The pupusas are the hook that will bring me back. I could easily eat at least one Cheese Pupusa, with or without the Curtido every day for breakfast followed by another and another and another. Like I said, they’re addictive. 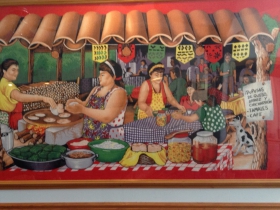 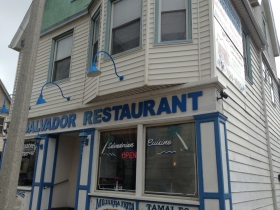 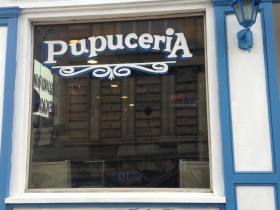 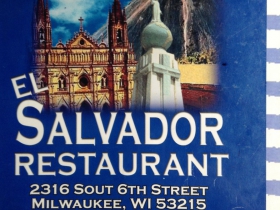 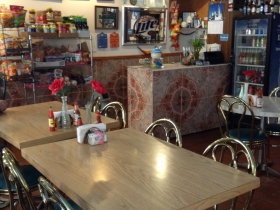 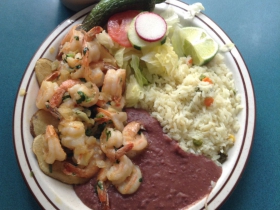 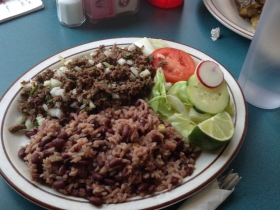 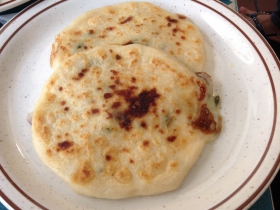 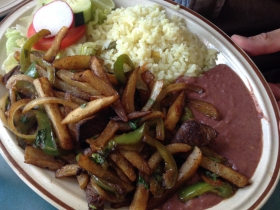