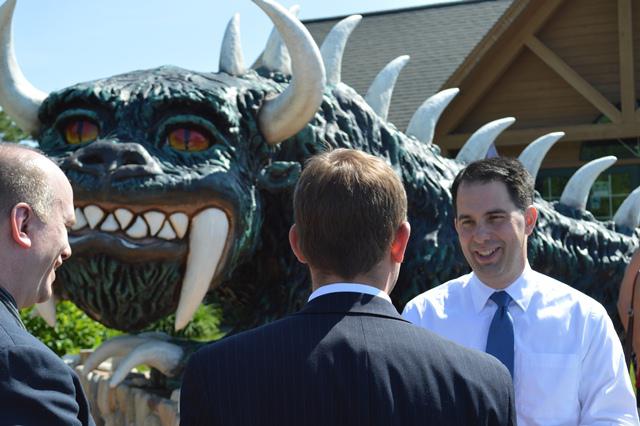 Scott Walker. Photo from the State of Wisconsin

The news last week that large numbers of employees are leaving state government was alarming, but not surprising. The Milwaukee Journal Sentinel reported there’s been a big increase in state workers leaving since Gov. Scott Walker was elected. Some 3,600 workers quit their state jobs in 2015, “which was 23% more than 2014 and nearly twice as many as in 2010.”

From the viewpoint of Walker and Republican legislators, that may not be a bad thing. Because all signs suggest their prime goal isn’t to hire the best and brightest in state government, but to hire party loyalists.

Act 10, the law decimating public employee collective bargaining rights, started things off by discouraging the best-paid employees from remaining in government. The idea that government workers were overpaid was never true. As a 2012 study found, “compared to private-sector employees, state and local government employees are under compensated by 5.6 percent.” What “overpayment” of public employees does occur is for the less-educated government employees, notably police and fire fighters, who were exempt from Act 10.

It is government workers at the top — the most skilled and best educated — who are paid the least compared to their private sector counterparts. But they did have job security, with protection by the state’s civil service system, and a good pension. Act 10 greatly reduced the value of public employee benefits and last year’s law killing civil service ended job security. For the best and brightest in state government, the major reasons to choose public over private sector employment are now gone. Small wonder some are searching for greener pastures.

That will only get worse as a result of the law ending civil service. Officials in the Walker administration repeatedly denied they intended to kill civil service, and all that secrecy was a tipoff they were worried about defending such a huge change. Once the bill was finally introduced, its Republican champions offered little evidence that state departments failed to hire the best people for the job or failed to provide good service, which is the essential goal of civil service. They suggested civil service entrance exams for hiring employees were “flawed,” without explaining how, or explaining why the tests couldn’t simply be fixed.

Finally, they argued that the goal was to “modernize” the system to make it more like the private sector. But the private sector isn’t run by politicians seeking to get reelected and looking to build power by hiring all the party loyalists they can. That’s why civil service was first created in America and why none of the 17 Republican and nine Democratic governors who have served since Wisconsin’s civil service system was created in 1905 had ever sought to overturn it. Because the alternative to civil service is a government run by party hacks whose prime goal is serving the party, not the people.

It was telling that the new law exempted the legislative service agencies, like the Legislative Reference Bureau, Legislative Fiscal Bureau and Legislative Audit Bureau. These highly-regarded agencies are crucial servants of the legislature, and are selected based on merit through the civil service system. Legislators wanted the best people to continue serving them, while they created a spoils system for the rest of state government.

For all the attention to Act 10, the law ending civil service will be far more destructive to Wisconsin. In the years to come, most new hires in state government must come from the millennial generation and Republican leaders will be looking to hire candidates likely to be party loyalists. They will be tough to find. Polls show a large majority of millennials support liberal policies like the Affordable Care Act and marriage equality and efforts to reduce carbon emissions, and tilt heavily toward the Democratic Party, while only about 15 percent are conservatives.

The private sector will be fighting to hire the smartest of these workers, whatever their political views, but in Wisconsin, as many as 85 percent of them may lack the world view required to work in the new Republican spoils system. You don’t hire the best and brightest when your career security depends on maintaining party power.

Cathy Stepp. Photo from the State of Wisconsin.

Even before civil service was ended, the Walker administration was aggressively searching for ways to promote people based on party views, according to Troy Bauch, staff representative for AFSCME Council 32 (which represents state employees). As he told me, “I’ve never seen anything like this in the 21 years I’ve been in this position.”

You can see the decline of the meritocracy in key appointments by Walker, a college dropout himself: As Madison’s WKOW-TV has reported, Ryan Murray, a former campaign staffer for the governor, became Chief Operating Officer at the Wisconsin Economic Development Corporation in 2012, “despite having no college degree and no real experience in economic development.” Former Republican State Senator Cathy Stepp was appointed Secretary of the Department of Natural Resources, though she had no college degree and “no real background of expertise in the area of regulation her agency oversees.” Republicans also slashed the number of scientists working at DNR, to better assure its decisions aren’t made based on science.

Then there was Walker’s choice for his Secretary of Administration, former Assembly Speaker Mike Huebsch, another college dropout. In one of the more comic moments in the Walker administration, Huesch was cited by Walker as his legal expert as to whether the state could be sued if it approved a Kenosha casino. (Huebsch has since switched to a job with the Public Service Commission.)

You can even see a decline in education among legislators as Republicans took over a majority: while 81 percent of legislators had a four-year college degree or better in 2009, that dropped to 73 percent by 2015. Though Walker failed to banish the “Wisconsin Idea” from the UW System’s mission statement, the actions the governor and Republicans have taken will assure that decisions in future years are based less and less on expertise and more and more on political expediency.

22 thoughts on “Murphy’s Law: How Walker is Killing the Meritocracy”