UW Death By A Thousand Cuts?

State budget cuts for UW System is causing many reductions in service.

By Tamarine Cornelius, Wisconsin Budget Project - Apr 21st, 2016 01:02 pm
Get a daily rundown of the top stories on Urban Milwaukee

Wisconsin lawmakers cut state funding for the UW System by $125 million per year for the budget period that runs between July 2015 and June 2017, reducing Wisconsin’s investment in keeping higher education accessible and jeopardizing the economic benefit that Wisconsin residents receive from the UW System.

UW officials have released descriptions of planned and ongoing cuts to academics, facilities, and services at each campus that have been made to reduce costs in the wake of the budget cut. Many campuses are reducing the number of classes offered, potentially increasing the amount of time students must spend in school before they can receive credit for courses required for graduation. Other campuses are postponing updates to outdated facilities, cleaning buildings less often, and reducing advising and mentoring services for students. This map shows a selection of the cuts made at each campus, along with each location’s share of the $125 million budget cut. 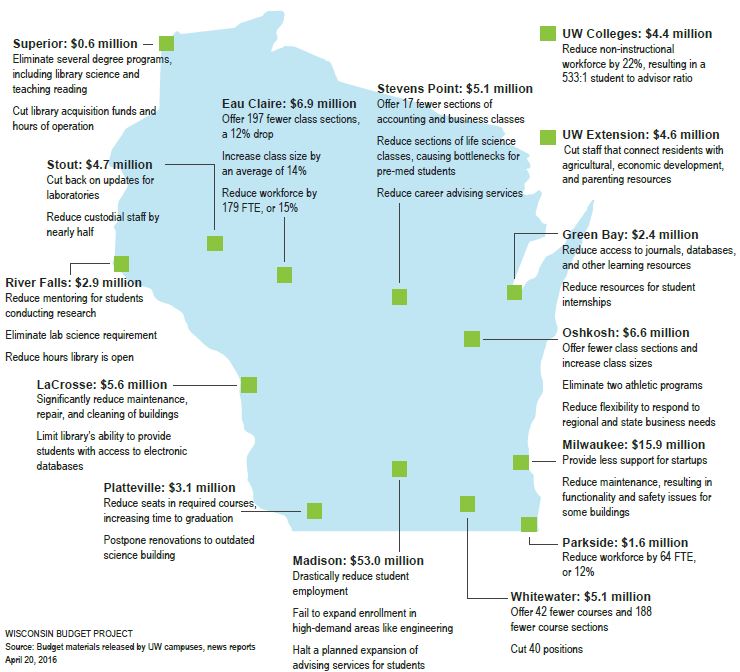 One thought on “Wisconsin Budget: UW Death By A Thousand Cuts?”