Milwaukee Not Among Most Racist Cities

So says new study, which also ranks state as among the most tolerant in America. 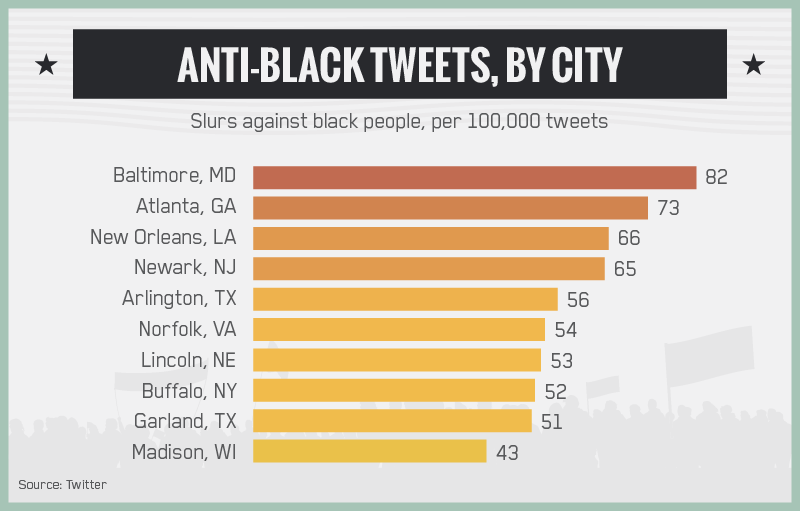 The idea that Milwaukee is among the most racist cities in America — something we have heard for decades — is based largely on one statistic, an analysis of how well distributed African Americans are throughout the metro area. But a new analysis of derogatory comments made on Twitter offers a different way to look into the hearts of minds of people in a given city.

Abodo, an apartment hunting site, analyzed 12 million tweets from June 2014 to December 2015 to find derogatory comments made about about different races, ethnicities, genders, religions, and sexual orientations and then ranked states and cities in various categories.

Milwaukee, a city always ranked as one of America’s ten most segregated cities, is not among the top ten when it comes to anti-black comments. Baltimore ranked first, with 82 slurs against black people per 100,000 tweets. Atlanta was second with 73 per 100,000 tweets and New Orleans with third, with 66 slurs. Interestingly, Madison, WI ranked 10th, with 43 anti-black tweets per 100,000.

Buffalo led the way in anti-gay tweets and most of the other cities in the top ten were again in those surly states of California (five cities, led by Riverside) and Texas (two cities, led by Arlington).

Moreover, the findings about Wisconsin and Milwaukee seem to be echoed by a study of where the N-word is most likely to be used in Google searches: Wisconsin largely ranked near the average in use of the N-word, and that included southeast Wisconsin. “The most concentrated cluster of racist searches happened not in the South, but rather along the spine of the Appalachians running from Georgia all the way up to New York and southern Vermont,” the Washington Post reported. “Other hotbeds of racist searches appear in areas of the Gulf Coast, Michigan’s Upper Peninsula, and a large portion of Ohio.”

West Virginia ranked among the worst states both in anti-black tweets and the use of the N-word.

Now you could argue that its absurd to rank the racism of cities or states based merely on how many racist-sounding tweets or google searches are done. But it’s arguably just as simplistic to use one statistic, the dissimilarity index, which measures how well distributed black residents are in a metro area, to condemn some cities as segregated and others as more progressive.

Using this approach, Milwaukee’s four-county metro area, which is 17 percent black, falls short of racial perfection in any census tract that is less — or more — than 17 percent black. Thus, census tracts that are 10 percent, 25 percent, 40 percent or 60 percent black are all considered unacceptable, though many people of both races might consider any of these to be integrated.

Under the approach used by the dissimilarity index, it doesn’t matter if a city actually has few blacks living there, so long as they are well-distributed. Thus very white metro areas like Salt Lake City (1 percent black) or Lincoln, Nebraska (2.7 percent black) have traditionally ranked as the least segregated. That makes little sense to me, and it’s worth noting that Lincoln ranks seventh worst among American cities in anti-black tweets. So does this mean Lincoln is more or less racist than other cities?

Much of the Great Migration of African Americans from the South was to northern cities, which now have some of the largest black populations. Yet these very cities, that also often have large Hispanic populations, end up being rated as most segregated using the dissimilarity index, while largely white cities get good rankings.

A recent ranking by Priceonomics flips this on its head, giving cities credit for being diverse places. Its analysis ranks Milwaukee as the 11th most diverse city in the nation, with Oakland ranked as most diverse. Milwaukee is also ranked as 34th least segregated among the 45 biggest cities; not a great ranking but far better than the segregated hellhole its been assumed to be for the last half century, as sociologists rolled out their simplistic dissimilarity index every ten years. (That includes the absurd designation of “hypersegregation,” which continues to be used by some though it is quite meaningless.)

I don’t mean to suggest Milwaukee doesn’t have racial problems. It clearly does. But the idea that this city is uniquely toxic in that respect — based on a single statistical ranking — is nonsense. A more nuanced and accurate way of viewing Milwaukee was suggested by the newly created “distress score” which ranked economic distress for all zip codes in America. The index found that neither the city nor county of Milwaukee was among the worst in the nation for “spatial inequality” but our metro area ranked among the worst.

Milwaukee faces many of the same problems as other big cities and has a long way to go in assuring equity for all. But it is probably ahead of many cities in some areas (for instance in reducing lead poisoning or infant mortality in poor, heavily black neighborhoods) and well-behind in other areas (incarcerating too many blacks and failing to create transportation links between central city workers and jobs). Rather than beating up on ourselves for the bogus label of most segregated city, we might be better off attacking the obvious issues of equity we face.

18 thoughts on “Murphy’s Law: Milwaukee Not Among Most Racist Cities”