A new study shows Milwaukee is among the ten most distressed cities. Is it accurate? 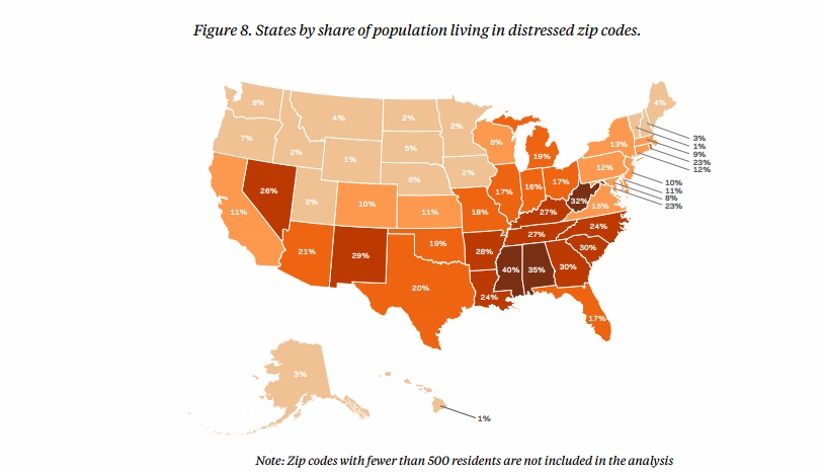 States by share of population living in distressed zip codes.

Question: Can the bright minds of Silicon Valley provide any guidance for cities like Milwaukee, which have been largely left far behind by the high tech hot spots of America?

A new group called the Economic Innovation Group (EIG) was launched last year, based in Washington D.C., with an impressive bipartisan staff and board, whose goal is to craft centrist proposals to stimulate the economy and press Congress to enact them. The hard part will be getting Congress to pass anything, but in the meantime the EIG has released a study that’s intended to define the problem: a detailed data analysis of the nation’s economy by state, region and city that got considerable coverage in the New York Times. The results are pretty dreadful for Milwaukee.

The study confirms what other information has suggested, that the nation’s recovery from the Great Recession hasn’t lifted all boats. Polls in the last two years have found the majority of people still thought the economy was in a recession, as the Times story noted. The new study found the gap between richer and poorer communities actually widened during the recovery. “The country’s top zip codes,” the report found, “are in the midst of an economic boom.” But “the most distressed 10 percent of zip codes lost 13 percent of their jobs and saw more than one in 10 business establishments close…The recovery gap stands out as particularly urgent and alarming because it suggests that well-being will continue to worsen for residents of locales that are locked in a downward spiral.”

The study set an ambitious goal, to use Census Bureau data from 2010 through 2014 to analyze 26,000 zip codes and over 3,000 counties as to the percent of adults with a high school degree, percent working, home vacancy rates, percent of people below the poverty line, median income as a percent of the state average, changes in employment and in the number of businesses. It then used those criteria to create a “distress score” and ranked those zip codes whose score falls in the highest 20 percent of its peer group, meaning its more distressed than 80 percent of zip codes.

The approach strikes me as unique, and because it’s not based just on one or two criteria, could become a valuable way to target those areas of the country most in need of help. On the other hand, it uses the Census Bureau’s American Community Survey data, whose sampling data can sometimes be problematic in tracking year-to-year trends.

Still, the study’s general picture of the country’s most distressed zip codes is likely accurate, and what it found is that these areas “are stuck in a deep recession, while the most prosperous flourish.”

There was good news for Wisconsin. In the average state 15 percent of the population lives in distressed zip codes, the study found, compared to just eight percent in Wisconsin. This state’s percent living in distressed zip codes was considerably lower than the comparable figure in Michigan (19 percent), Illinois (17 percent) and Indiana (16 percent) but well above Iowa and Minnesota (both at just two percent).

The distressed zip codes were heavily concentrated in the South, but also in the Rust Belt cities of the northeast and Midwest “and California’s Central Valley or Inland Empire,” the study noted. “A common feature unites this geographically diverse group: Each has struggled to transition from an economy based on legacy industries (often manufacturing) to a more advanced, knowledge-based one. Such cities include Buffalo, Cleveland, Milwaukee, and Winston-Salem.”

The Times was able to get some unique data from the study that broke down all seven criteria for the ten worst cities here. Milwaukee in this analysis ranked seventh worst, with low marks in the growth of businesses and jobs dragging it down.

It’s instructive to compare Milwaukee’s economy to Madison’s: “Prosperous large cities tend to be the familiar hubs of the knowledge economy,” the study notes, “cities that specialize in innovation-intensive, technology-based, and high end services industries such as Austin, Madison, Raleigh, San Diego, San Jose, and Seattle.”

Indeed, Madison is a shining star: “Very few large U.S. cities combine high levels of prosperity with low levels of spatial inequality,” study found. The nine that do include Madison, along with places like Arlington VA and Scottsdale, AZ.

The study’s concept of “spatial inequality” is new and provides an alternative to the “dissimilarity index” used by sociologists to measure segregation, which often labels Milwaukee as among the most segregated in America. (And which I’ve suggested is simplistic and misleading.) Rather than simply looking at how well-scattered African Americans are within a metro area, as the dissimilarity index does, this study looks at the distribution of all the distressed population.

But “at the metropolitan scale, Indianapolis, Jackson, Las Vegas, and Milwaukee all emerge as some of the most spatially unequal places in the country.”

This strikes me as a far more accurate portrait of Milwaukee’s metro area. The charge of being the most segregated city inevitably prompts discussion of divisions within the city proper. The reality is that Milwaukee has by far the largest population of people of color in Wisconsin. By far the biggest divisions in race and income are not within this city, but between Milwaukee and its surrounding three counties, where zoning restrictions keep out low-income people of any color.

Meantime, this study is a sobering look at the economic challenge facing cities like Milwaukee, with a high percentage of distressed zip codes. “Once distress sets in,” the study notes, “it seems to persist: even the country’s most dynamic and successful cities struggle to achieve geographically equitable prosperity.”

The study echoes a host of findings suggesting the nation’s people are increasingly polarized and separated both economically and politically. Cities have traditionally been the places with the most density and diversity and the renaissance in downtowns and older city areas occurring in Milwaukee and many other American cities offers hope that things can and are improving. This study, however, strongly suggests a national strategy may be needed to bring real hope to distressed areas.