WMSE Heats Up the Town

The team from Brewed Cafe. Photo by Michael Horne.

The 14th annual Rockabilly Chili Fundraiser was held Sunday at the MSOE University Kern Center, 1245 N. Broadway, drawing nearly 4,000 attendees to the engineering school’s gymnasium to sample chili from some 50 vendors, drink beer from one brewery, and support the town’s “community-powered” independent radio station. That would be WMSE.

The doors opened at 11 a.m. A line around the block had already formed an hour earlier.

The beer, shipped in the form of 27 kegs, was from the Milwaukee Brewing Company, and was available for $5. Each attendee received four free samples of chili, and was encouraged to buy more tickets if desired. You could also buy a cupcake pan to transport multiple chili cups around the cavernous, two story hall.

Some chefs take chili making quite seriously, which is good news for those people who take chili tasting quite seriously. You could see the aficionados in the crowd, sitting at a table and comparing notes. A Napa Valley wine tasting panel headed by Robert Parker himself is a drunken bacchanal compared to the chili tasters’ earnest debate on the merits of their samples.

The chili offerings were to be judged by popular ballot : best meat, best vegetarian, most unique chili, best heat, and best vendor display / presentation. But due to the complexity of the situation and the large number of paper ballots to be tallied, the results would not be available until Monday at 1 p.m. when they were to be announced by station manager Tom Crawford. [See list of winners below.]

Crawford also narrated the Chili Races which took place on the running track suspended above the second floor gymnasium space. The chili event took up virtually the entire building, on two floors, each teeming with humanity.

In the middle of the second floor Artists Working in Education (AWE) set up some tables filled with projects for the young visitors, who were numerous. Jim Harris and his daughter made peppers from foil and plastic tape, while other children kept busy at block printing and other creative pursuits. Yellow-shirted volunteers kept the action going. The ratio of children to adults was refreshingly high. There were enough two-year olds to knock many years off the average age of the crowd, bringing it down to about 12, it seemed.

This was the quintessential Milwaukee — kids running around finding their own amusements (including dancing) — while the parents knocked down some beers and filled their bellies, while letting the little ones wear themselves out. Now, that’s a Sunday!

Then there were the vendors, spread around the periphery of the vast space on both floors. Some decorated their booths quite creatively, others, like the Winchester, were content to have a couple of wrestling mats serve as their backdrop, or perhaps to protect the cinderblock structure in case one of the Winchester people should happen to stumble. These are some big fellows.

Real Chili made an appearance, and I headed there for a bowl of chili I could understand. Chefs of the chili oeuvre have become quite fanciful in some instances I have learned, which is why there is a category called “most unique,” to be won by Hue. Indeed, globalism has now brought us Chili from Indochina. This could have been avoided if we had never gone to war in Vietnam.

The Riverwest Co-op offered vegetarian selections, as did some other venues, but this was mostly a meaty, spicy affair. The Riverwest Co-op later won for best vegetarian chili. The Outpost set up as a camp, complete with hanging cleavers and cast iron skillets. Hog and Hops was one of the offerings.

There was a bit of food-related non-chili drama on the floor. The action involved two toddlers, one a girl and one a boy. The boy had a bag of pretzels, and the girl, wordlessly, but with unquestioned determination, decided that she would like some of those pretzels — perhaps all of those pretzels — whether the boy liked it or not. The children were able to settle this matter amicably when the boy offered up some of his stash to the juvenile highway robber.

Lakefront Brewery was there, but to offer chili, not its beer. Rob Messinger was there from Hector’s, celebrating its 27th year in business. One entire wall of the first floor was devoted to entrants from the Milwaukee Fire Department, including the Command Staff.

Brewed Cafe was there with a kinetic backdrop display filled with color and moving images and decorated with fresh flowers. It was a foregone conclusion that this Brady Street coffee shop would once again win for best display. Stubby’s was there with an iron pig to offer its wares, and the new Camino made its first appearance at the event.

A booth from Local First promoted the idea that we should shop locally, which simply reinforced the message of WMSE, 91.7 FM, whose quirky and utterly independent format has long identified with local bands and interests, such as the vendors who supported the contest. The station is celebrating its 35th anniversary with a number of events this year, but the chili contest is its largest single fundraising event.

On Monday afternoon, Jay Burseth of the station announced the event drew slightly under 4,000 people and raised $72,000 for the station. And the awards for best chili?: 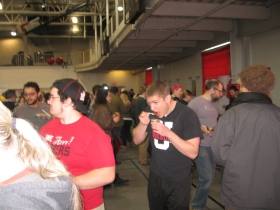 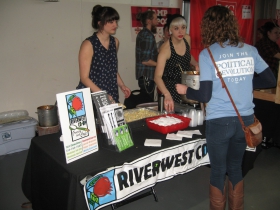 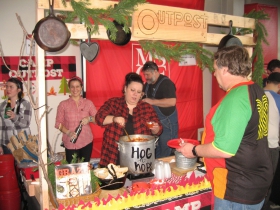 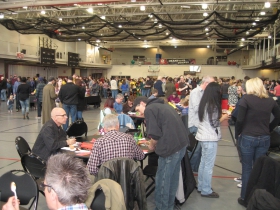 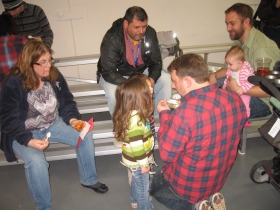 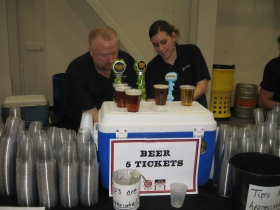 One thought on “Plenty of Horne: WMSE Heats Up the Town”