The Gas Works that began lighting the city in 1852 nearly caught fire in epic 1892 conflagration. 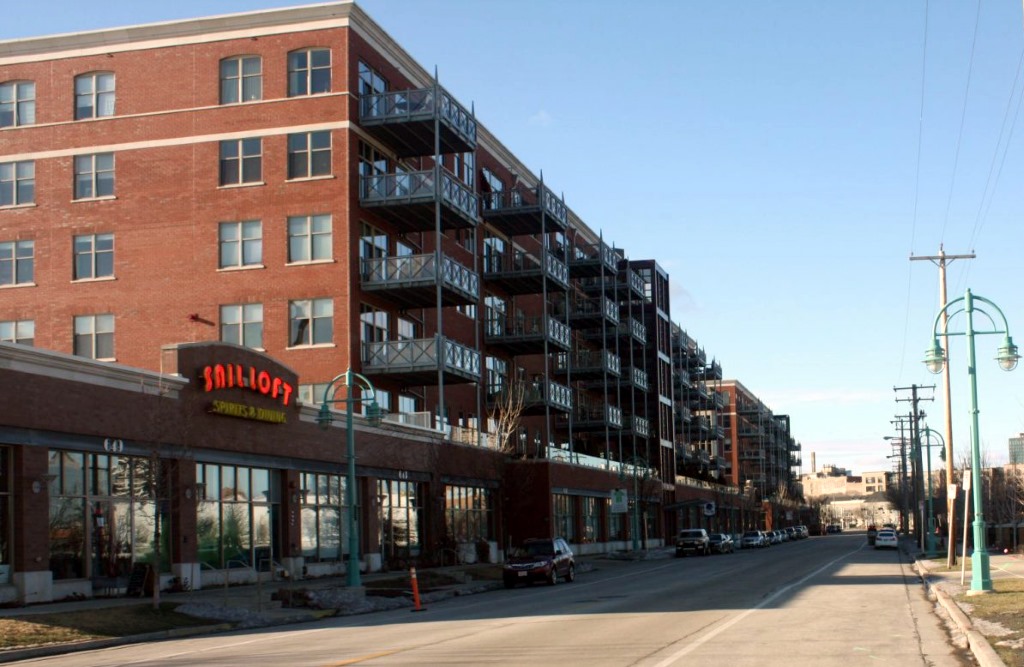 Erie Street was named by city ordinance in 1856, but the name had been in use for at least ten years before that. News articles from 1846 mention grading Main Street (now Broadway) from Huron (now Clybourn) to Erie Street.

Many Third Ward streets were named for Great Lakes ports (Chicago, Buffalo, Detroit (now St. Paul)) or Great Lakes (Michigan and Huron). This points to the street being the namesake of either Lake Erie or Erie, Pennsylvania, a port on Lake Erie. The word Erie comes from an Indian term meaning “long tail,” which referred to a tribe of Indians along the south shore of Lake Erie.

But Erie Street isn’t very long; it’s a diagonal that parallels the Milwaukee River and runs southeasterly from N. Water Street to the Straight Cut, the channel connecting the river to Lake Michigan. 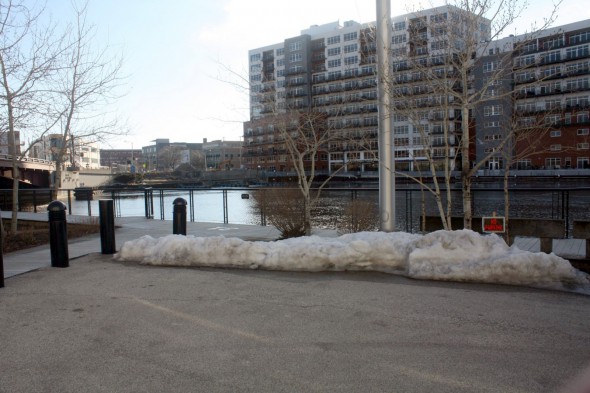 Site of the Dousman Dock. Photo by Carl Baehr.

In 1860, at the N. Water Street end of the street, was the Dousman Dock on the river. On the evening of September 6th of that year, about 300 Milwaukeeans crowded the dock, waiting for the magnificent Lady Elgin to take them to Chicago for a one-day excursion. The luxurious side-wheel steamship was late but did eventually arrive and departed for Chicago before midnight. (The historical marker at E. Erie and N. Water Streets erroneously states there were more than 500 city residents on the Lady Elgin).

On its return trip to Milwaukee about 26 hours later, the Lady Elgin sank after a collision with a lumber schooner during a storm off the coast of Winnetka, Illinois. About 240 of the Milwaukeeans died along with about 60 crew members and passengers who were destined for ports north of Milwaukee. Most of those lost were Irish from the Third Ward. The disaster had the largest loss of life of any in the city’s history.

In 1852, Milwaukee began to see the light – literally. Up to that time, nighttime in the city was very dark. The only lights were candles or oil lamps in the windows of buildings along the streets, and they did little to illuminate the way. Walking the dark sidewalks was dangerous for residents, as thugs used the lack of light to prey on those who did. More than a few people ended up walking off docks and into the river because they could not see their way.

The streets became much safer when the new Gas Works was constructed at E. Erie and E. Corcoran Streets, but the unpleasant odors it created made the Third Ward neighborhood less desirable. The Works used coal, much of it shipped from Erie, Pennsylvania, to produce coal gas that flowed through the gas lines installed throughout Downtown. The inauguration of the system was delayed when an explosion blew out a wall of one of the Gas Works buildings and it needed to be rebuilt.

Street lamps were lighted for the first time on November 23, 1852. The Milwaukeee Sentinel commented: “The Gas Lamps in our streets burn brightly and add as much to the looks as they do to the security of the city.” Because of the expense of the gas though, the streets lamps were extinguished at midnight. Some residents liked the gas lamps so much that they re-lit them after they were turned off. A reward of $5 was offered for information leading to the culprits.

During the next few decades, gas lines were installed to homes and businesses to provide lighting within the buildings. The technology improved and gas became less expensive and more universally used. The fuel was used for cooking, water heaters, space heaters, and industrial production.

The city’s gas supply was jeopardized during the Third Ward Fire of 1892. The fire began on Friday evening on October 28th near Detroit (now St. Paul Avenue) and N. Water Streets. Fifty-mile-an-hour winds from the northwest blew the wall of fire toward the Gas Works, burning over 400 buildings along the way. The fire department concentrated their efforts along N. Water and E. Erie Streets, where the more substantial buildings were located. Fire Chief James Foley, who lost his father, brother and cousin in the Lady Elgin Disaster, requested assistance from fire departments within 100 miles of Milwaukee.

Gas Works foreman, Thomas F. Powers, had to take action well before help arrived. The Irish-born Powers and a crew were fighting fires in the wooden structures around the Works. His own Third Ward home was consumed by fire while Powers prevented what many had feared, the explosion of the gas holding tanks. Powers increased the pressure in the gas lines to clear them out. Gas lights throughout the city briefly blazed brighter, sputtered, and then went out. The move allowed Powers, who was proclaimed a hero, to lower the holding tanks below ground level and keep them safe from the fires. The parts of the city without the newer electric lighting suffered dark nights until the following Wednesday, while residents who prepared their food on gas stoves were in for a few days of cold dinners.

A decade later, the Gas Works moved to the Menomonee River Valley, but the smells no longer generated by the Works were replaced by new odors when the city refuse incinerating plant was built at the foot of E. Erie Street at the Straight Cut. The nearby area was sarcastically referred to as “Palm Beach” and was described as the “most desolate part” of the Third Ward.

Today, the restful and pretty Erie Street Plaza occupies the site of the former incinerator. Condos and other buildings line the river and the street. Just six-tenths of a mile long, Erie Street is now one of the more desirable, and expensive, locations in the city. 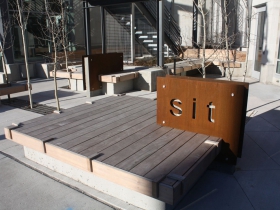 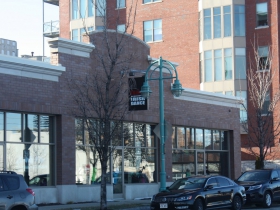 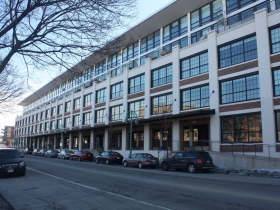 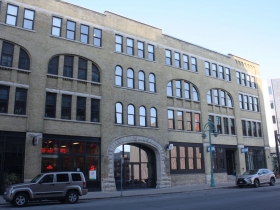 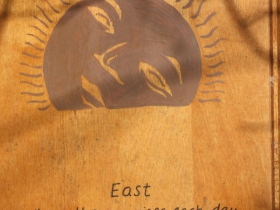 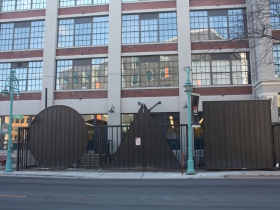