Buddha Lounge Is Quite a Surprise 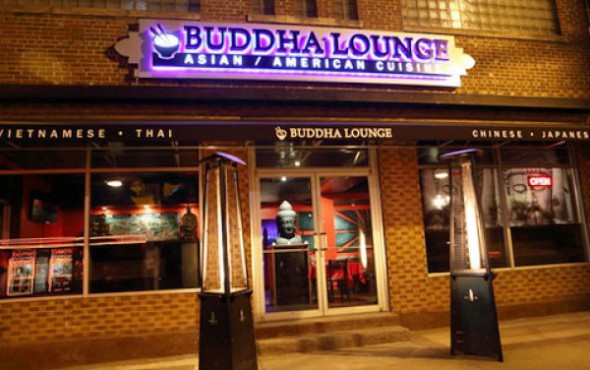 Buddha Lounge, at 1504 E. North Ave., just east of the river, might be declared an Oriental kitsch-free zone. Gone are the trappings of typical Asian restaurants, no red velvet in sight! Instead, we were greeted by an interior that sets Buddha Lounge apart from any of the area’s asian/fusion restaurants. Stunning lighting and life-size Chinese statues complement the modern decor. The stylish decor in the “lounge” area led to an even bigger dining area, softly lit, just right for a relaxing or romantic dinner. The stunning art reflects the many cultures that the Buddha Lounge’s menu represents.

Buddha also features a full bar with too many large TVs to count. I later learned that Buddha Lounge doubles as a Sports Bar for NFL and PPV Boxing, MMA and UFC events on Saturday fight nights. Be sure to call ahead if planning on a Saturday night diner. I visited on one of these “Fight Nights” and found the bar and dining room packed to capacity! All sporting events featured food and drink specials.

Our party of four was greeted within moments of entering. Our server explained the multi­Southeast Asian specialties here: Thai, Chinese, Vietnamese, Sushi & Sashimi, as well as a few “American” Asian selections. All the courses arrived warm and in a timely fashion.

We all decided to try different appetizers so we could share the varied choices. Being an adventure seeker, I ordered the Seaweed Salad ($5). Imagining the soggy, slimy seaweed of my youth, I was amazed by the crisp, bed of greens, lightly dressed with a sesame oil dressing, as well as “roasted & white sesame seeds,” as they were described, topped with avocado slices. A surprisingly crisp, subtle salad, both fresh and flavorful.

The spring rolls ($8) were the largest I have ever seen as an appetizer. We decided to try one featuring the grass-fed beef and the other with shrimp. The rolls arrived sliced in two served with peanut sauce. Not a big fan of peanuts, I asked for an option, and the pot sticker sauce was suggested. My friends all raved at the size of the rolls, a meal-sized portion, stuffed with a combination rice noodles, romaine, cucumber and cilantro wrapped in traditional rice paper. Each had a substantial amount of shrimp or beef. Both were tasty and were enhanced with the flavorful sweet and salty pot sticker sauce. And my friends enjoyed the chunky-style peanut sauce. Well worth the price, the spring rolls were my selection on a following visit.

Now a popular staple at most asian restaurants, the pot stickers ($6) were offered steamed or seared. We selected the seared version and also decided to try all three offered fillings; pork, chicken, and veggie. To our surprise, the searing added both flavor and texture. The pot stickers were not overly browned, but the searing introduced a subtle crispy bite and caramelized flavor, a good alternate to the standard steamed version. Each filling had a distinct flavor, the pork was my favorite. The previously mentioned pot sticker sauce again completed the flavor, with just the right amount of spiciness and heat.

Our final appetizer, Crab Rangoon ($6) also had a Buddha touch. Too often a greasy, crunchy, folded chip filled with some kind of bland goo, these eight amply sized, crisp-but-not-greasy Crab Rangoons were filled with a generous portion of genuine crab and cream cheese flavor. Not a fan of fried food, I was surprised by the light crispiness and we all enjoyed the full flavor of the filling.

The simply-laid-out menu offers selections from a variety of Southeast Asian cuisines. Many dishes come with a choice of brown, black, or white rice, my favorite being the black. Upon perusing the menu’s three sections, we were all impressed and surprised by the simplicity as well as the eclectic variety of the offerings. We were also offered a separate, smaller, double-sided, single-page “Sushi Specials” menu. 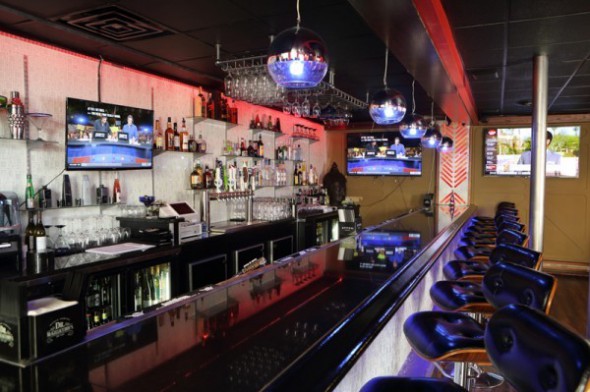 Let me state that I crave the flame of a spicy dish, and normally order the top end of the heat offerings. There’s none of that here. The server explained that while the traditionally spicy dishes are mild we can request more heat if we want to feel the burn. Also, the Wasabi served here is very robust.

The portions at Buddha lounge are huge, as in: plan on taking a full second meal home with you! I ordered the Thai Buddha Curry ($12), offered with red or green curry broth as well as a choice of free range chicken, grass fed beef, or shrimp ($3.00 added charge). I selected the red curry, with beef and added heat. My favorite Thai restaurant, Bangkok Orchid, closed several years ago, and this curry dish brought back memories of the very authentic Thai flavors. A good assortment of vegetables (the red curry adds carrots, a plus). All agreed, the red curry was tasty, authentically flavored, and yes, spicy. Topped with fresh Thai Basil. Five stars.

One person decided to experiment off the Vietnamese part of the menu, with the Buddha Pho ($14, $11 small bowl). It’s available in two versions: Authentic Pho, with tripe and tendon included, and the standard version without either. Both featured chicken or beef broth and beef brisket as well as meatballs and a garnish of Cilantro and Scallions. Seemingly the Buddha standard, this was a huge bowl arrived served with the added Shrimp ($4), piping hot and fresh. Not overly spiced, the cilantro and scallions enhanced this hearty Pho. A taste revealed a subtle beef broth with thin slices of brisket accented by the fresh cilantro and scallions. A definite comfort food for any diner, 4.5 stars! 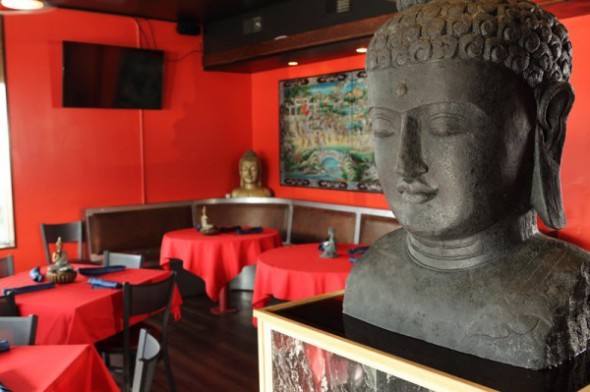 The dinner was preceded by the Chefs Combination of Sashimi and Nigiri,  an assortment of raw fish. Never having dined on raw fish, I was surprised by the fresh and flavorful Salmon, Yellowtail, White tuna, Eel, and Scallop. Accompanied by wasabi and a chili pepper aioli, and bam!, lots of kick. Everyone in our party of four found it a refreshing treat. And the restaurant offered to split the cost of this dish on our four separate bills, which was convenient.

Our party left feeling pleased with the selections offered as well as the flavorful dishes we ordered, and the personal attention to detail that came with the service. Several of my dinner companions brought their own group of friends in within a week of our initial dinner. I also returned several times.

Buddha Lounge offers daily happy hour specials from 4 p.m. to 7 p.m. with half-off micro­brewed taps and rail cocktails as well as half-off all appetizers. On Sunday there are half-priced sushi rolls as well. Specials are also offered during sports events including all day Sunday and during the NFL games on Monday and Thursday nights; and MMA, UfC, or Boxing events. Buddha also features free Sunday night Salsa or Flamenco dance instructions at 8pm followed by several hours of similar open dance. You might think this is all too much for one restaurant/bar to offer. But Buddha Lounge managed to please us in every way.

3 thoughts on “Dining: Buddha Lounge Is Quite a Surprise”