Short street had city’s only lynching and only one of an African American in state history. 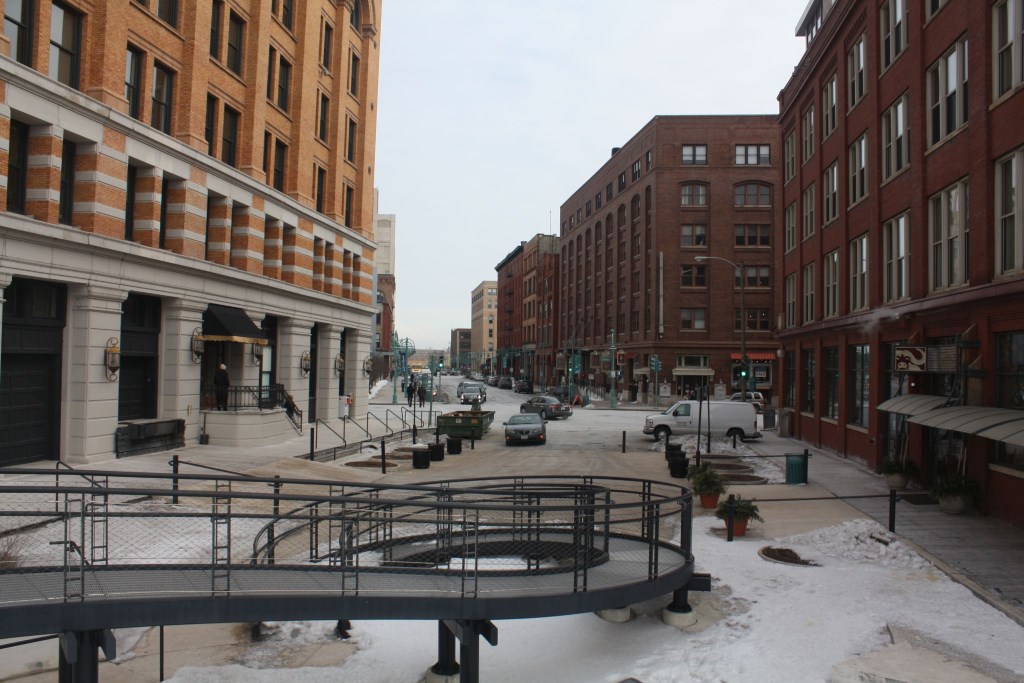 When this street was platted in 1837 by Solomon Juneau and Morgan L. Martin, the city of Buffalo was on the route to Milwaukee. Travelers from the Atlantic seaboard used the Hudson River and the recently opened Erie Canal to get to Buffalo, NY, where they boarded Great Lakes ships to complete their trips to Milwaukee. Other streets in the Third Ward named in the Great Lakes pattern were Chicago, Detroit (now St. Paul), Huron (now Clybourn), and Michigan.

Between 1850 and 1861, there were six major civil disturbances in the city. With the experience the city gained in putting down the “Bank Riot” ten weeks earlier, and with Civil War troops readily available, this last mob action, the lynching of Marshall Clark on Buffalo St. should never have happened.

Just as it was getting dark on Friday evening, September 6, 1861, a confrontation between two African-Americans, James Shelton and Marshall Clark, and two Irishmen, Darby Carney and John Brady, took place in the Third Ward. All had been drinking and they argued about a perceived insult to two women walking by. Carney was recognized by his adversaries and one of them was quoted as saying, “We know you, Darby Carney, we are as good as any damned Irishman, anytime, or any Yankee either.” Shelton then stabbed both Carney and Brady and, as he and Clark were running from the scene, he also stabbed John Ellis, an Englishman carrying his ladder home after lighting the street lamps.

Shelton, 28, was a waiter at Anderson’s ice cream establishment near the Newhall House. He was described as a man with “a quiet, orderly disposition” who “hardly ever drinks anything.” George Marshall Clark (that was his full name) was 22 and a barber, a trade he learned from his father, George Sr., who ran his business on Wisconsin Avenue and was considered a “very respectable man; but his son . . . was an ugly, dissipated and worthless fellow.” Shelton and Clark lived together near 5th and State Streets. Carney was described as a good guy when he was not drinking, something that seldom occurred.

The morning after the stabbings, Shelton and Clark were arrested and admitted their guilt, saying they were drunk. Darby Carney was still alive, but it did not look like he was going to survive. There was enough angry talk throughout the Third Ward all day that the evening Daily Milwaukee warned it would not be surprising to learn of an attempt to “rescue the prisoners and bring them before Judge Lynch’s Court.”

When fire bells in the Third Ward signaled Carney’s death about 11 o’clock Saturday night, a mob formed, picking up members as it moved north and numbering about 50, with as many as 300 onlookers. It was near midnight when they reached the jail at the north end of Cathedral Square.

Fearing that all prisoners might escape if the mob were successful, the jailers had prepared by separating Clark and Shelton from the rest of the inmates and locking them in a back room of the jail. Police Chief William Beck stood in front of the jail door with two policemen, but this did not slow the mob. Beck was hit in the head with a stone and the policemen were easily pushed aside. William Kendrick, the jailor, had a pistol, but after the mob used a heavy timber to ram the door open and burst into the jail, he put it down. Clark was grabbed and taken out the front of the jail while Shelton, unnoticed, went out the back door and escaped.

Clark was taken to Buffalo Street, where, a little east of Water St., the mob spotted a pile driver and ended Clark’s life by hanging him on it.

The next day the mayor and police chief called in the military, who were only 15 minutes away at Camp Scott on Wisconsin Avenue. By Sunday evening, cannon were in position near the jail on both Jackson and Jefferson Streets, manned by the Washington Artillery. The Home Guard and the Wisconsin Rangers camped in Cathedral Square and pickets were set up for several blocks around the jail. Since Clark was dead and Shelton had escaped, it is not surprising that no further trouble developed.

On Monday, September 9th, James Shelton was captured near Waukesha. In October he was tried for the murder of Darby Carney and acquitted, probably because Clark had already paid with his life for the murder. Immediately after the trial, Shelton was secreted away from the city, some say to Chicago.

In November, four Third Ward men were tried for the murder of Marshall Clark, but the jury could not agree on a verdict, so they were freed and the incident was over.

In 1872 Buffalo Street, already short, became shorter. The Chicago and Northwestern Railroad announced a plan to extend railway service north through Milwaukee. This required that tracks be laid through the Third Ward near the lake and on filled-in land at the base of the bluffs up to the North Point area. The plan called for a freight depot at E. Buffalo and N. Van Buren Streets and a passenger depot at E. Wisconsin Avenue. Before this could be accomplished though, squatters who lived in shanties east of N. Van Buren Street at the east end of Buffalo Street needed to be removed.

After the railroad was in operation, a freight car derailed and hit Sarah Horrigan‘s house, which was too close to the tracks on E. Buffalo Street. The collision left her house unstable. When a horse belonging to her neighbor, Tom Welch, had an itch and sought to relieve it by scratching its back on Horrigan’s house, the structure collapsed. Irate, Horrigan attacked Welch and his wife but she was outnumbered and suffered defeat. The Welchs were fined $15 for their part in the event. 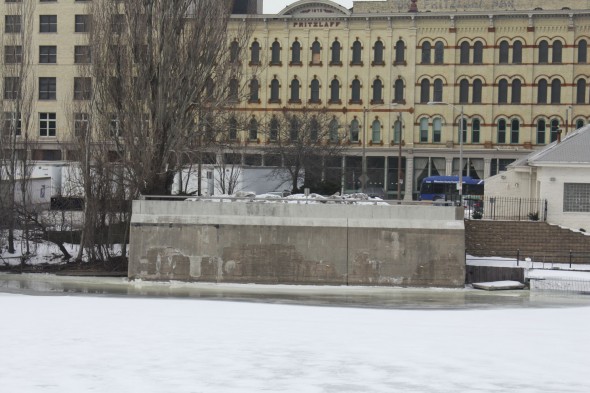 To make the new freight depot more accessible to businesses on the west side of the Milwaukee River, a bridge was built over the river at Buffalo Street. It was a swing bridge that pivoted on a center pier. In 1896 the SS Christopher Columbus, a 362-foot-long passenger ship, hit the partially opened bridge, nearly sending the 75 people who were on the span into the river and severely damaging the bridge. A draw bridge replaced the swing bridge in 1914. (In 1917, the  SS Christopher Columbus collided with a water tower near Michigan Street, sending the tower onto the ship and killing 16 passengers).

The Buffalo Street bridge was removed in the late 1970s after the construction of the bridge over the river at St. Paul Avenue. The little stub that was created as an approach to the bridge on the west side of the river, and known as W. Buffalo Street, remains today. But that’s where Buffalo St. ends its short, disconnected, half-mile stretch. 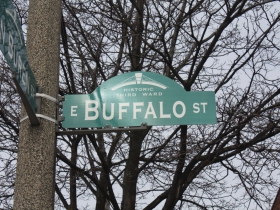 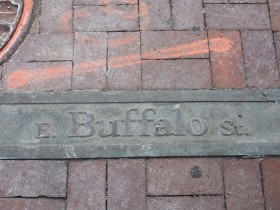 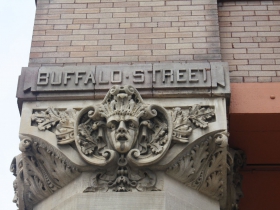 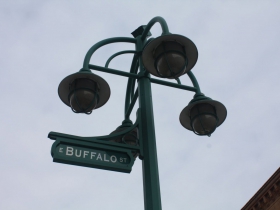 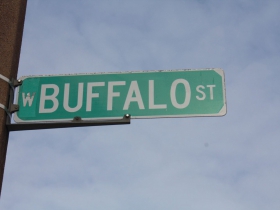 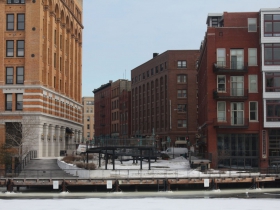