How to Save the Middle Class 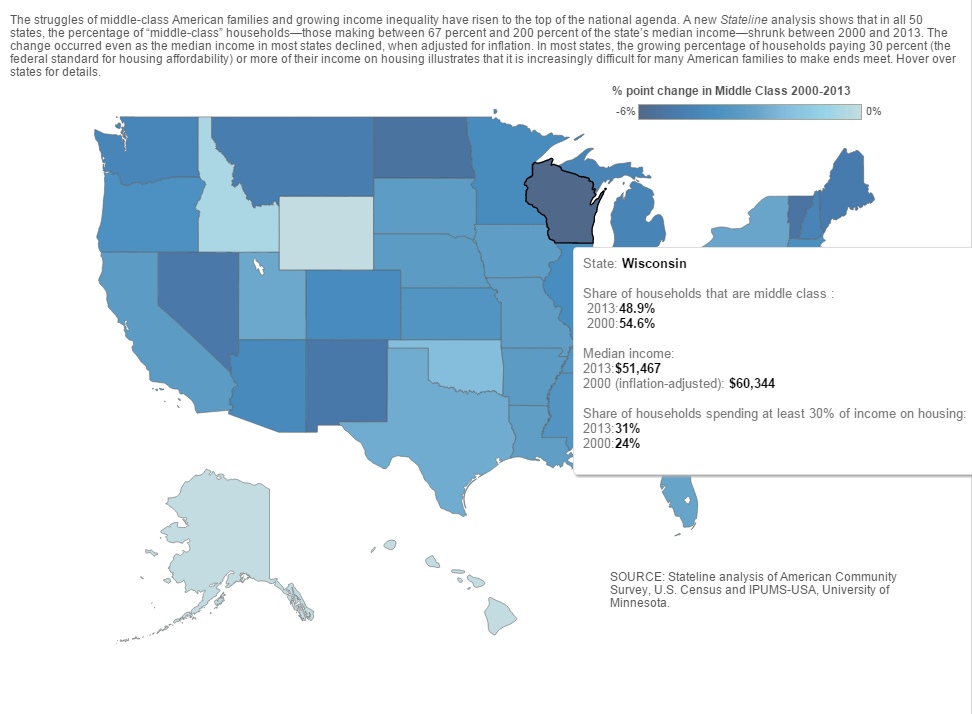 Wisconsin now leads the nation in destroying its middle class

According to a recent report from the Pew Charitable Trusts, Wisconsin now leads the nation in destroying its middle class. Defining “middle-class households” as those with income 67 percent to 200 percent of their state’s median, Pew showed Wisconsin leading all other states in the 2000-2013 period in its rate of loss. The finding is shocking, but probably not news to anyone who’s been watching Wisconsin trends in wages, jobs and income. As COWS, a think tank based in Madison, has consistently shown in its annual State of Working Wisconsin, wages have been stagnant, job growth anemic and income has been declining for a long time.

Median worker wages here, for example, are now $17.38 an hour. In inflation-corrected terms, that’s up only 71 cents from 35 years ago — equivalent to an increase of only 2 cents a year — despite a near doubling of worker productivity over the period. Job growth has been pathetic, among the worst in the nation. If Wisconsin had merely kept pace with the rest of the country’s recovery from the Great Recession, we’d have 90,000 more jobs today than we do.

And job quality has declined just as badly. More than a quarter (27 percent) of Wisconsin workers now make $11.55 or less an hour. A full-time year-round job at that wage is not enough to keep a four-person family out of poverty, even on America’s distinctively stingy definition of the poverty line.

Data from the Department of Public Instruction shows, by school district, the share of Wisconsin school children poor enough to qualify for free or reduced-price lunch. In 2001, 24 percent of students qualified. By 2013, that share nearly doubled, to 42 percent. Things got worse in virtually every school district in the state.

Wisconsin could do much better than this, but we’ll have to change our government to do so. Why? Because the middle class in America was never “naturally” created by an economy with no rules beyond price competition, and it won’t be in the future. Private market actors won’t produce those rules on their own. They’ve got other things to do, and it’s not in their short-term interest. The only place those rules can come from is the public — which has a broader and longer-term interest in building communities and a society fit to live in — acting through its government.

What could you do to rebuild the Wisconsin middle class? Many things. But here’s a starter punchlist.

Increase the minimum wage: Twenty-nine states now have state minimum wages higher than the paltry federal $7.25 an hour. Our neighbor Minnesota just raised its minimum wage to $9 an hour and continues to produce strong economic growth. Uniform and strong enforcement of wage standards also can increase income for workers at the bottom of the labor market while leveling the playing field for all business. But Wisconsin’s current government has resisted any effort to increase the minimum wage here, or improve wage enforcement. It should stop doing so.

Invest in ourselves: An economy with opportunities to grow the middle class requires broad access to quality education. That means having a decent educational system, ideally one that starts with pre-kindergarten and continues with opportunities for workers to gain needed skills and degrees in high school, technical schools, college, university and beyond. Wisconsin used to have such a system. Now, at tremendous cost to our future as a state, our government is roundly trashing it. This should stop, too.

Go green: Wisconsin imports nearly all its energy, and most of it is dirty. This drains income from the state and runs counter to where the world needs to go and is, finally, going. Current Wisconsin government has done nearly everything in its power to discourage both energy efficiency and development of Wisconsin’s own clean energy generation resources — blocking the tens of thousands of good local jobs that a determined state effort could create. It should stop being so shortsighted.

Stop throwing away free money: Gov. Scott Walker and the Legislature’s leadership basically hate Barack Obama. That’s fine, I guess. A lot of people do. But while rejecting money from the feds — for improved transportation, health care for poor kids (some $1 billion that could have come from expanded Medicaid) and rural broadband expansion  — may score some political points, it also makes the state poorer. The governor should confine his pique and point-scoring to speeches, not let it directly hurt the state’s economy.

To get a middle class, you need a government that wants to build it. Wisconsin doesn’t have such a government now. Draw your own conclusion on what needs to be done.

Joel Rogers is the Sewell-Bascom Professor of Law, Political Science, Public Affairs and Sociology at the University of Wisconsin-Madison, and director of COWS.

22 thoughts on “Op-Ed: How to Save the Middle Class”