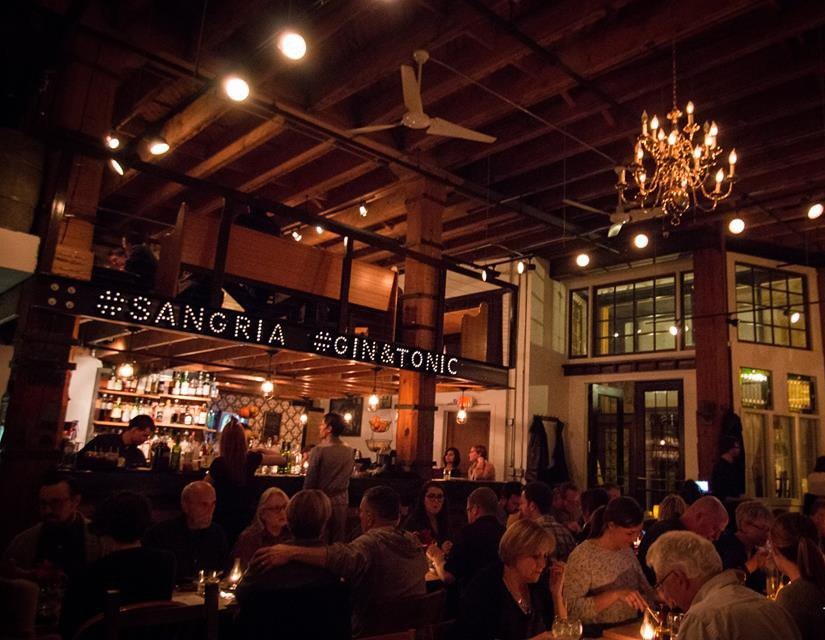 As we settled in for dinner at Movida, we were surprised when a server walked by our table carrying a large animal leg, probably from a pig. Only later did it occur to me that this must have been the famous Iberico de Bellota, considered by some the finest ham in the world. Descended from the prehistoric Mediterranean boar, this Iberian delicacy is renowned for the purity of the species and its diet consisting of acorns and wild plants.

As it happens, we ordered the Iberico de Bellota from the Charcuteria menu, at the time unaware of the reputation of that celebrity pig (which I learned about with some post-dining research). Our serving came on a little wooden platter accompanied by a small bowl of baby-carrot-size crackers. We found each paper-thin slice streaked with fat, almost too salty, and slightly chewy. “It leaves an aftertaste that lingers,” my friend commented as she gnawed on a slice. “It doesn’t taste like any ham I’ve ever tasted.”

When we ordered, I had noticed the prices for Charcuteria in the $4.00-$8.00 range. As a moderately frugal diner, I choked when the bill arrived and the skinny slices my companion and I wrapped around crackers to mitigate the salt cost $45.00. The ham was interesting, but it would not be my first choice for how to spend this much money.

Oh well, the rest of the Pinchos, or small plate appetizers, were uniformly delicious. And my friend and I dined two different times, in order to try more of the menu. The Mushroom Croquetas ($5) with garlic aioli and flecked with bits of parsley were deep-fried with a breading so light it dissolved in my mouth leaving a molten center of pure creamy mushroom essence.

Likewise, the Eggplant ($4) had a crunchy deep-fried crust that held the al dente eggplant together. It was served with Salmorejo Sauce, an emulsified mix similar to gazpacho, only with a creamy texture, and orange blossom honey that made each bite pop with umami.

The dim lighting fooled me as the Belly Tosta ($5) served on rustic sourdough toast with avocado and red onion slices turned out to be tuna, not the pork belly I expected. No problem. It, too, was delicious, as was the Smoked Salmon Tosta ($5) with black pepper goat cheese, also served on sourdough toast. Both the tuna and the salmon were fork-tender, though we ate them with our fingers as the toast resisted our knives.

Since Movida serves the food and drink of Spain, I ordered the obvious, Paella. What could be more appropriate than the country’s most celebrated dish? We weren’t in a rush; a 40-minute wait for Paella was reasonable; it was a good choice. I picked the Daily Special ($14), a paella made with roasted yellow and zucchini squash with cherry tomatoes, black pepper goat cheese, and smoked salmon.

When our server asked, “Do you want it crispy on the bottom?” I thought “why not?” and was not sorry. Everything in the mini-paella was flavored by the salmon, the rice, the veggies, and even the goat cheese. I would have preferred more bottom-crisp, but how much crust could the chef achieve in just 40 minutes?

On another night our server recommended the octopus or Pulpo ($13), we said “Yes,” but tentatively. “You don’t have to pay for it if it tastes like rubber bands,” he said in reply to my concern based on prior experiences with that oft chewy dish.

He didn’t have to worry. The Pulpo was almost fork-tender and the crisp fingerling potatoes hiding underneath the Mojo Picon sauce added just enough crunch. The slightly smoky, slightly spicy sauce pulled it together along with arugula that added a note of pepper to the mix.

The Tagliatelle ($15), fresh pasta with beef short rib ragout, offered no surprises. It was classic Italian with Manchego added to give a Spanish twist to the entrée. There was enough meat to coat the pasta, but not too much, and like everything we sampled and shared, the short rib was fork-tender.

At the end of a meal I often pass on dessert. Thanks to the small plates that left us with some appetite, each of our us ordered from the brief dessert menu both times we dined.

The Vanilla Bean Flan ($6), as creamy as a perfect crème brulee, came with dark chocolate coffee beans sprinkled on the plate, a double treat in the mouth, and a paper-thin almond tuille. The Apricot Toffee Cake ($6) with caramel sauce and candied walnuts was gooey and oozed with caramel flavor. The Flourless Chocolate Cake ($7) with its dense dark chocolate flavor left no doubt about the talents of the pastry chef at Movida. The awesome Bread Pudding with Dulce de Leche ($7) and a few pomegranate seeds to add texture, came straight from the oven, browned on top, saturated with caramel from the dulce de leche. Our server was impressed that just one person, me, ate the entire bread pudding.

Movida feels like a large space but it’s not. It has unusually high ceilings, a cream city brick wall decorated with large black and white photos, an L-shaped bar, and many small tables for two that fill every inch of the restaurant. It’s also dim, almost too dim to read the menu without a light. We were so close to our neighbors that during one of our dinners, when we commented on their scallop entrée, they ordered a second plate because they loved the dish so much they wanted to share it with us. We all had a taste, and yes, it was memorable.

Because the tables are small, a team of servers removed each dish as soon as we finished to make room for the next. Both times we found the service especially friendly, efficient, and despite a crowded restaurant on a Friday evening, willing to take time to talk with us about the bullfight photos on the wall.

I know now to bring a tiny flashlight, so I know exactly what I am ordering and how much it costs. Only the Iberico de Bellota strained my wallet; everything else was reasonably priced, and delicious. And I will certainly return on a Wednesday, Ladies Night, when my first drink is on the house.

One thought on “Dining: Movida a Great Choice for Spanish Food”