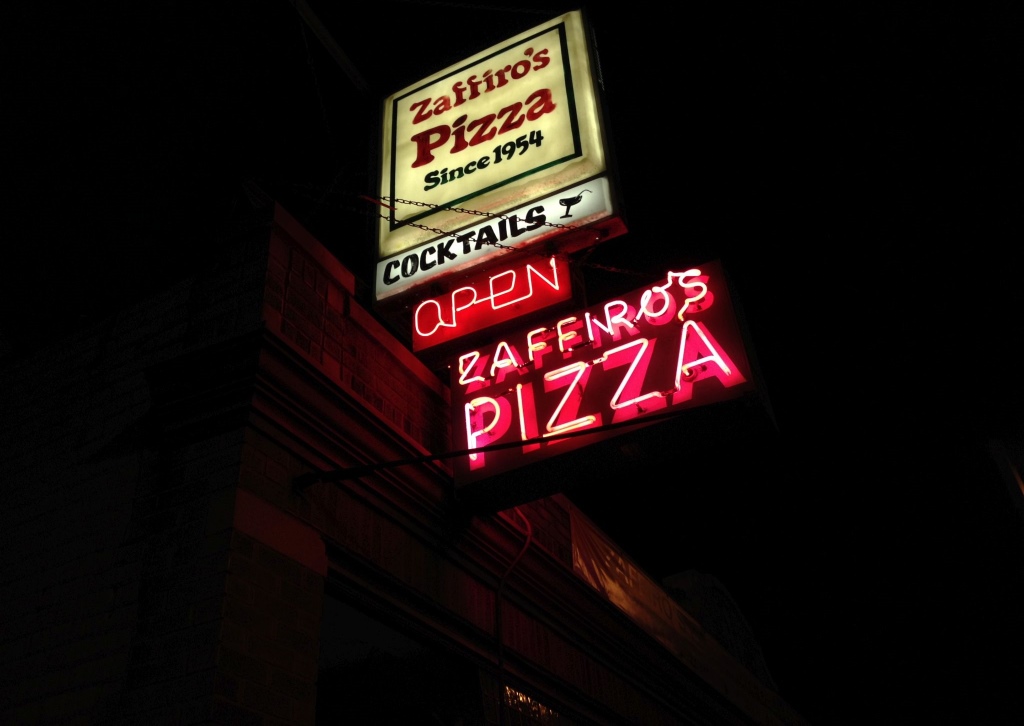 Last week my friends and I were enjoying $2.50 glasses of Schlitz at Jim’s Time Out, our new go-to, pre/post Bucks game spot and one of the last wooden buildings standing in the heart of downtown (746 N. James Lovell St.). (Jim’s does not have a happy hour, but $2.50 glasses/$9 pitchers of domestic beer is their everyday low price.) I was soliciting ideas for my weekend trip to St. Louis, searching for things to do in between adventures at the incomparable City Museum.

“Whatever you do, don’t get St. Louis-style pizza. They’re trying to do cracker crust like Milwaukee, but it sucks,” said my friend Derek.

As this bit of information sunk in, I realized how long it’s been since I’ve had high quality, thin-crust Milwaukee pizza. My most beloved establishment, Mama’s near 76th and Burleigh, tragically closed in April. Their oil- and salt-soaked garlic bread, gooey lasagna and mouthwatering thin-crust pizza was a staple of my family’s diet. Whenever the pie was cooked long enough for spots of brown cheese to form and the pepperoni become slightly charred, tasting of bacon, I approached nourishment nirvana.

On my way to the train station I stopped at the grocery store for snacks and spotted the latest issue of Milwaukee Magazine, which has a Best Pizza cover story. I had already decided to feature a classic Milwaukee pizza joint for my happy hour this week, so naturally I bought the magazine for the ride. On the train I learned that despite Milwaukee’s penchant for thin crust, we also have formidable deep dish, Napoletana and NY-style. Plus, more and more places now offer gluten-free crust. I’m a big fan of Lisa’s Pizzeria (2961 N. Oakland Ave.), but they don’t have a happy hour, so I decided to try another East Side legend: Zaffiro’s (1724 N. Farwell Ave.).

Zaffiro’s emerged in the mid-20th Century, back when the Third Ward was full of Italian immigrants. A couple years after opening a bar (Rock-A-Bye Tap) in their neighborhood, brothers John and Liberio “Bobby” Zaffiro opened a pizza place near Brady on Farwell, creating a pie unfamiliar to Milwaukee’s dining class, inspired by their Sicilian family recipes. Since 1954 they have been defining the saltine-like Milwaukee cracker crust, which they boast is no thicker than two credit cards. Bobby passed away in 1987 and John in 2006, but the cozy two-room restaurant remains family-owned.

As you walk through the alleyway behind Zaffiro’s (where there’s a small parking lot) the smells can induce feelings of intense pleasure. Enter under their inviting neon sign and you’re transformed to a bygone era. Opposite the bar hangs a poster of Borchert Field, the original home of Milwaukee baseball (1888-1952), which was demolished the year before Zaffiro’s opened. Perched behind the bar is a small sheepshead tournament trophy, the popular local card game.

Their neon sign advertises that in addition to pizza Zaffiro’s also carries cocktails. Their modest bar was once the domain of Bobby Zaffiro, who entertained and served their loyal patrons. Today Zaffiro’s opens at 11 a.m. for lunch and happy hour begins at 3 p.m. (weekdays until 6 p.m.), with $4 rail mixers 2-for-1 and domestic beer $1 off (regularly $3). The last time I was in St. Louis my friends and I did a blind taste test of 100-year-old (or more) beer in our hotel, which included Miller High Life, Pabst Blue Ribbon, Schlitz, Hamm’s and Blatz. Of the five Schlitz was voted the most flavorful. (Zaffiro’s carries all but Hamm’s.) Having been around well before the emergence of (truly flavorful) craft beer, Zaffiro’s lumps them in with domestics (after all, they are made in America).

“Two-dollar Spotted Cow and Lakefront beer? We live in a paradise,” exclaimed State Representative and high school friend Daniel Riemer, when he joined me at Zaffiro’s bar. Dan was also celebrating his birthday and the $2 craft beer was a wonderful way to do that, as well as a perfect pre-pizza pairing. In addition to Spotted Cow, Lakefront IPA and Riverwest Stein, Zaffiro’s carries Sprecher Amber, Leinie’s Red, and Blue Moon. Rounding out the domestics are Rolling Rock, Point, and MGD. They also have standard imports ($4) including Peroni, light beer, two NAs and a few shorties (7oz).

Zaffiro’s welcomes you to start at the bar and take your happy hour drinks to the dining room, but no back and forth. You can also eat at the bar, which we did. The meal started with garlic bread, three thick slices with a side of marinara sauce, which had nice seasoning but were not mind-blowing. However, the pizza lived up to its reputation. We ordered “Everything But Fish” with fresh rather than canned mushrooms, a recent topping along with fresh spinach, and savored every bite. For a more traditional Italian dining experience Zaffiro’s offers 9 white and 11 red wines, including a $5 house chianti and a $5 house lambrusco.

Ever since I discovered Al’s Beef one afternoon wandering around Union Station in Chicago I’ve become an Italian beef enthusiast. I’ve yet to have anything as good as Al’s in Milwaukee. Tony’s on 35th and Villard is known for their BBQ but the Italian beef ain’t half bad. Fred’s Drive-In on 48th and Vliet is the best I’ve tried so far, precisely because they offer three levels of moisture, the key to a great Italian beef. The sandwich is made with thin-cut beef marinated in juices, which the hoagie can be dipped in before consuming.

After seeing Italian beef on the menu at Zaffiro’s I knew I had to return the next day. But before I bit into the sandwich I knew it wasn’t worth the second trip. Although flavorful and packed with giardiniera, neither the meat nor the bread showed any signs of moisture. If you’re going to try something other than pizza at Zaffiro’s, I’d stick to the noodle-based dishes (spaghetti, mostaccioli, ravioli or tortellini), Sicilian steak sandwich, or Italian sausage patty. At the bar they have candy, chips and peanuts. And let’s not forget spumoni for dessert. Whether you’re stopping by for pizza or happy hour drinks, Zaffiro’s offers an old- school parlor experience whose atmosphere and aromas are hard to beat. 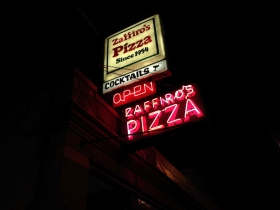 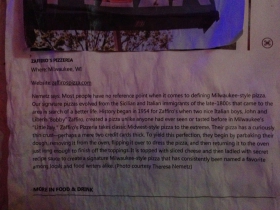 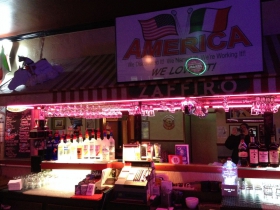 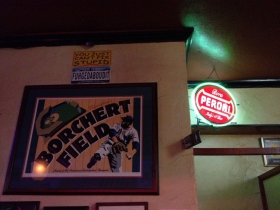 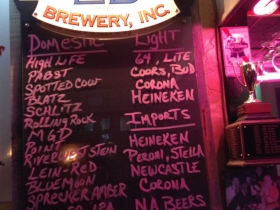 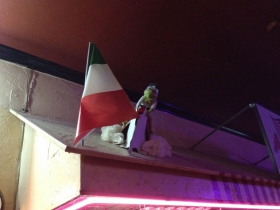