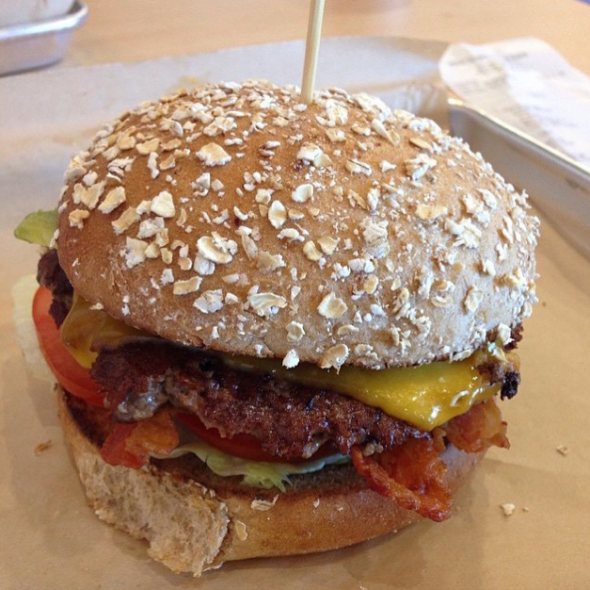 Should you be traveling to Saudi Arabia, Kuwait or Qatar, there is a little bit of home awaiting you: each country has at least one Mooyah franchise serving its “Burgers, Fries & Shakes.” The Dallas-based burger chain, which has nearly 40 franchises in the Lone Star state, has since gone on to conquer 20 more states, including Wisconsin, with franchises in Madison and Fitchburg, and nine other nations, mostly located in the Middle East. Who knew they were so big on burgers?

After they are loving you in Oman, Azerbaijan and Denver, why wouldn’t they heart you in Brookfield, WI? Mooyah will open its first Milwaukee-area location at Brookfield Square, 95 N. Moorland Road, in little more than a week, as reported by the Milwaukee Business Journal.

Local franchisees Punit Jaiswal and Ashraf Noorani already signed on to open four more places in the area over the next four to five years, targeting areas such Mooyah-deprived hamlets as Menomonee Falls and South Milwaukee. Once those locations do well, they’ll look into expanding into the city itself. Suburbs are the sweet spot for franchise food.

According to their website, Mooyah serves fresh, never-frozen, USDA beef with no fillers or preservatives as part of their build-your-own-burger menu. If beef isn’t your thing, then the franchise also serves all natural turkey burgers, black bean veggie burgers and 100 percent all beef hot dogs. Complementing the black bean burger are sweet potato fries. Finally a burger franchise for vegetarians. You can even wrap your burger in iceberg lettuce instead of a bun, though we’re doubting they do that in Dallas.

Mooyah’s also says it serves fries made from fresh cut, US #1 Idaho potatoes and hand crafted, 100 percent real ice cream shakes. They’re such a hit in Dubai, there are now two franchises in this high-rise redoubt of United Arab Emirates.

The new world is coming to Old World 3rd St. According to the Milwaukee Journal Sentinel, a new, 800-capacity country bar by the name of Red, White and Blue will soon fly its patriotic colors in the former Buckhead Saloon space at 1044 N. Old World 3rd St. The bar, created by Rock Sports Complex and Milwaukee Wave soccer team owner Mike Zimmerman and The Pub Club owners Jake and Seth Dehne, will open with a New Years Eve party and then hold an official grand opening in early January.

The bar will feature many forms of live music throughout the week. There will be open mic welcoming young musicians from Nashville as well as local artists on Wednesdays, a DJ on Thursdays and a combination of the two on Fridays and Saturdays. The bar will also host parties before and after country shows at the nearby concert venues. The bar will even include a studio for 94.5 KTI Country to deliver live broadcasts during shows and country concerts.

It will be open Wednesdays and Thursdays from 8 p.m. until 2 a.m. and Fridays and Saturdays from 7 p.m. until 2:30 a.m. You can reserve tickets for the New Years Eve bash by visiting their website.

Milwaukee is going to feel a lot chicer soon. Maybe. Owners Rita and Craig Willis’s plans for a Chic Lounge at 770 N. Jefferson St. – next to their Chic Café – appear to be moving forward, as reported by OnMilwaukee.

The original Chic Lounge opened at 131 N. Jackson St. in 2009, but was closed down after just a year when the owners decided to move to a bigger space. Then in 2013, they moved into the Jefferson building and planned to open both an eatery and a lounge. The first phase was completed with the opening of the Chic Café, which serves American, southern and Cajun cuisine. And now, according to a liquor licensure notice posted on site, it looks like the plans for lounge in the second phase are on their way.

Miles Borghgraef is stepping down from his two-year post as chef de cuisine at Lake Park Bistro, 3133 E. Newberry Blvd., for an undisclosed venture as reported by OMC. Chef John Raymond, former owner and chef at Roots Restaurant and Cellar, will take up Borghgraef’s position.

“He [Raymond] started with us at Harbor House a couple of months ago as a sous chef with the intent of something ‘bigger picture’ for him opening up in the future,” Lake Park Bistro executive chef and Bartolotta Restaurants corporate chef Adam Siegel told the publication. “We look forward to his experience he will bring into the kitchen as well as his many farm connections.” Yep, all the top chefs now have to have farm-to-table credentials.

Raymond also expressed similar excitement in joining the award-winning restaurant. “This should prove to be a long term culinary journey for all to share in its fruits,” he told the publication.

The Milwaukee Public Market at 400 N. Water St. is a lot more festive thanks to the efforts of baking and pastry arts students from Milwaukee Area Technical College (MATC). From Dec. 4th through the 15th, you can see around 35 student-made gingerbread houses on display on the second floor of the market, according to the Journal Sentinel.

Viewers can also bid on the houses via a silent auction where all of the proceeds will go towards scholarships for the baking and pastry arts programs through the MATC foundation. You can also vote for the best house for the “people’s choice” scholarship winner while professional bakers will pick a scholarship winner on Dec. 15th.

According to Urban Milwaukee’s permit information for the building, the restaurant will soon be home to what is currently known as DugOut 54, the name presumably referencing nearby Miller Park. It will be owned by Burke’s Irish Castle’s former co-owner Karlis “Chuck” Vecitis,  also a former owner of Kelly’s Bleachers. DugOut 54 will operate as a full service restaurant, tavern, night club, banquet hall and cocktail lounge according to the November 2015 application. It will be open from 8 a.m. until bar time seven days a week.

Will you miss Burke’s Irish Castle? Let us know in the comment section below.