“The NRA’s Vision for America is Anarchy.”

Not long after Ed Flynn took over as Milwaukee Police Chief in 2008, he began pushing Democratic politicians like Gov. Jim Doyle to pass a concealed carry law. By then Wisconsin was one of just two states without such a law, and Flynn predicted it would inevitably pass here. “I said you better pass a law soon, because otherwise you’ll get a law passed with anything the NRA (National Rifle Association) wants,” Flynn recalls.

Both Flynn and Milwaukee County District Attorney John Chisholm urged the Democratic-controlled legislature to pass a law, but with common sense restrictions, as they saw it. The Democrats declined, and once Republicans took over the legislature, they wasted little time passing a sweeping concealed carry law in June 2011 and submitting it to Gov. Scott Walker.

Flynn does not oppose concealed carry for law abiding citizens. “I’m in favor of it. There are neighborhoods in this town where people should be able to carry a gun lawfully,” he says. But he adamantly opposes a law without some restrictions and pleaded with Walker to be the “adult” and use his power to make sure the law’s language gets amended. Walker declined.

The result is a huge increase in guns and violent crime in Milwaukee, Flynn contends, and a situation where police safety is in jeopardy. Under the current law, he says, “we are doing everything we can to make sure our criminals have unfettered access to high-quality firearms and get to carry them in record numbers. There are more guns out there every year.”

Flynn notes several problems with the law that could have been avoided if it had been more judiciously crafted.

First, the statute only prohibits convicted felons from carrying guns. “There are a lot of bad people out there who don’t get a felony conviction,” he notes. Indeed, state law has a “habitual offender” statute — in essence defining a “career criminal,” Flynn says — whose definition includes someone with three or more misdemeanor convictions. Yet they are allowed a CCW (carrying a concealed weapon) permit.

The reason for the three misdemeanors rule is many felonies are downgraded during plea bargaining, and so, for instance, aggravated assault may become a simple assault. “There are 15,000 felony arrests a year,” Flynn notes. “Guess what? There’s not going to be 15,000 trials.” The cost would be astronomical and the legislature would never pay for this.

There are also those with just one or two misdemeanors such as “endangering safety by use of a dangerous weapon” or “pointing or aiming a gun” that Flynn also believes should not be allowed a CCW permit.

Second, when criminals are nabbed for carrying a gun Illegally, he notes, it’s a misdemeanor, “no matter how many times you are arrested for this.” So why should any gang member stop carrying a gun illegally?

Third, the law bars the police from learning anything about concealed carry’s impact. “The law prohibits the police from sorting, accessing, analyzing or publishing any data regarding their experience with concealed carry,” Flynn notes. At a time when all these best police departments in America are data-driven, why tie their hands this way?

Fourth, the new law has put police at a disadvantage in dealing with criminals. “For years we’ve taught police officers the visual clues and behaviors that make it likely this person is armed.” That could lead to police nabbing a criminal before a crime is committed.

But under the CCW law, “the new language says when the police see someone carrying a gun we are to assume they are carrying legally, even in a high-crime neighborhood where there are hundreds of crimes that happen,” Flynn notes.

It’s still possible to preemptively nab a criminal carrying a gun but its now harder, both Flynn and Chisholm say. Chisholm notes that there had once been a joint effort by the police, DA, state Department of Justice and U.S. Attorney to target those illegally carrying guns. Much of that effort has melted away, he says.

Then add other, long-standing loopholes regarding guns. Those who purchase guns legally can sell them on the street to criminals, because no background checks are required for secondary sales. And friends or relatives of criminals can simply make straw purchases of guns for them, and if the police trace the gun to the straw purchasers they can simply claim they lost the gun or it was stolen. “And there’s no legal requirement to report a lost or stolen gun,” Flynn notes. 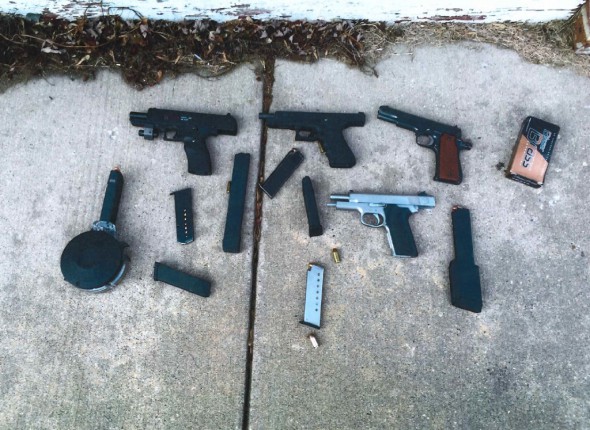 Police were able to prevent a likely shootout on the near North Side where one criminal was armed with guns and ammunition supplied by his brother, who had a CCW permit. Photo courtesy of Milwaukee Police Department.

In a recent example, the police were able to prevent a likely shootout on the near North Side where one criminal was armed with several guns and tons of ammunition supplied by his brother, who had a CCW permit. (See photo taken by police.)

The result in Milwaukee, says Flynn: “there’s a robust industry of buying guns legally and selling them on the street.” The number of guns recovered by Milwaukee police has risen every year since CCW was passed, rising from 1,972 in 2011 to 2,329 in 2012. “And so far this year we’ve already seized more than 2,400 guns,” Flynn notes. That’s an increase of at least 22 percent.

And this category of homicide has risen significantly in recent years. “How do we stop criminals from shooting each other over mean mugging and Facebook fights?” Flynn asks.

Finally, he notes, the restrictions on how cops can handle those suspected of carrying guns has put them at risk: “For all the talk about officer safety, this legislation has made the city unsafe for my officers.”

The issue of any restrictions on guns is often presented as a battle between gun owners and those who don’t own them. In fact, polls show that “85 percent of gun owners favor universal background checks,” as the Washington Post reported. “Gun owners also strongly support a federal database of gun sales, prohibiting ownership for those convicted of domestic violence and barring people with mental illness from buying guns.”

Nearly 1 in 3 Americans own a gun. But only a tiny portion of those people — 5 million — belong to the NRA. In Wisconsin polls in past years show respondents opposed concealed carry by a 60 percent to 32 percent margin. It seems quite likely many gun owners would have favored some restrictions, all the more so if they were proposed by law enforcement officials.

Flynn recalls pleading with one legislator to amend the law to include some restrictions. “He said he was open to the idea but was held hostage by the NRA. He told me to call the NRA lobbyist and if they said it was okay the legislator would vote for it.”

“The law was dictated by the NRA,” Flynn charges. “The NRA’s vision for America is anarchy. We are supposed to believe the founding fathers wanted to arm our pirates, the highwaymen and anyone else who wanted to tear down democratic institutions. It’s insane.”

Supporters of concealed carry, it’s worth noting, claim it reduces crime, but there is no credible evidence for this, as Data Wonk colunnist Bruce Thompson has reported. Even as they have made such claims, the NRA-led lobby has made sure no research can be done on the impact of guns. The Centers for Disease Control and Prevention has not sponsored research on guns since 1997, due to threats from Congress to cut off funding, in response to NRA lobbying. And Wisconsin’s concealed carry law, similarly, allows no research to be conducted.

Thus the police in Milwaukee or any urban area in Wisconsin, where most crime occurs, cannot keep track of crimes committed by those with CCW permits, or crimes stopped by law abiding citizens with permits. Neither claim can be tested by research. No learning is allowed.

Flynn’s complaints, in far briefer form, were reported by the Washington Post. Flynn called the concealed carry law “ludicrously weak” and in response, Walker’s ever-busy spokesperson Laurel Patrick noted that Walker is concerned about gun violence and provided funding for the shot-spotter program that traces the location of gun shots. As for any problems with the concealed carry law, Patrick noted, Walker will not apologize for being a strong supporter of gun rights.

77 thoughts on “Murphy’s Law: “The NRA’s Vision for America is Anarchy.””