That’s the theory behind proposed bill to permit guns in college buildings. Is the theory true?

Two intellectual models dominate the discussion of guns and crime. One says more guns leads to more violent crime. If guns are easily available, petty disputes can escalate into injury or death. To reduce violence in America, you need reduce the number and availability of guns.

The other view is that having more guns in the hands of law-abiding citizens reduces crime. If criminals are confident their likely victims are unarmed they will be more likely to commit their planned crimes, in this view. Pointing to the wake of recent mass shootings, these advocates also lament there weren’t people armed and ready to shoot back. This theory is also behind the current legislative bill to permit concealed carry in college buildings.

Which side is right? An immediate problem is a shortage of accurate data, particularly research that digs below the surface. Even the basic statistics are often unreliable; the FBI crime data in particular is very dependent on the conscientiousness of local police departments, which can vary widely.

Another problem is common to most public policy research. It’s often very difficult to separate the effect of various gun laws from the many other things that may affect gun violence.

However, the dearth of solid gun violence research is to some degree deliberate and political. As a recent article in the Washington Post described, the Centers for Disease Control has not sponsored research on guns since 1997, when Congress, under pressure from the National Rifle Association, threatened to cut off CDC’s funding. Two years ago President Barack Obama ordered the CDC to resume funding firearm studies, but it has not done so, citing a lack of overall funding.

The Wisconsin concealed weapon law was also written to discourage research: “Neither a law enforcement agency nor any of its employees may sort or access information regarding vehicle stops, investigations, civil or criminal offenses, or other activities involving the agency based on the status as licensees or holders of certification cards of any individuals involved.” While the language is opaque, it seems aimed at discouraging any effort to quantify the extent to which permit holders may be involved in crime.

To a large extent, the more-guns less-crime position depends on a study by John Lott and David Mustard that compared the changes in crime in states and counties that passed laws between 1977 and 1992 that allowed citizens to carry concealed weapons, including Maine, West Virginia, Idaho, and Montana, with states that did not, such as New York, California, Illinois, and New Jersey. They concluded that violent crimes went down in states that legalized concealed carry.

Other scholars have looked at Lott’s data and disagreed with his conclusion. The criticisms (see here and here for examples) make several points. One is that Lott ignores other possible explanations for the differences, notably that during this period the crack epidemic hit the states he used as controls much harder than the states changing the concealed-weapon laws. A second is that crime randomly rises and falls over time; so that a fall in crime after a concealed carry law is passed might have happened anyway. A third concern is that the conclusions made are very sensitive to slight changes in time period, which states are included, the model chosen, and coding errors.

Since the appearance of his first paper, Lott has become the most prominent advocate for the argument that more guns drive down crime. This was evident in a commentary of his titled Americans now know: More guns = less crime published in the Journal Sentinel earlier this year. His Crime Prevention Research Center makes this very clear including links to Lott’s books with titles like More Guns, Less Crime and The Bias Against Guns.

An example of Lott’s approach is his treatment of the international comparison of guns and crimes. The next graph, taken from his web site, is meant to demonstrate that as firearms per person go up the homicides go down. He gets to this conclusion, however, by including countries whose economies, laws, and effective government often leave much to be desired. 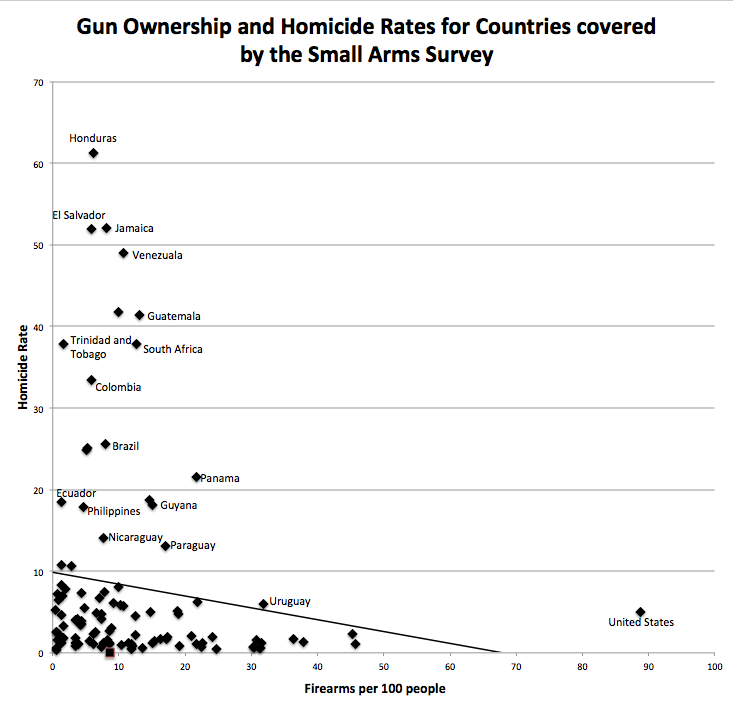 Here is what the correlation looks like if the comparison is limited to countries at more or less the same level of development as the United States: Western Europe, the United States, Canada, New Zealand, and Australia. Now homicides go up along with the number of guns. The United States is an outlier, both in terms of gun availability and violence. Without it, the correlation between guns and deaths becomes very weak (for those technically inclined the coefficient of determination drops from .49 to .04). 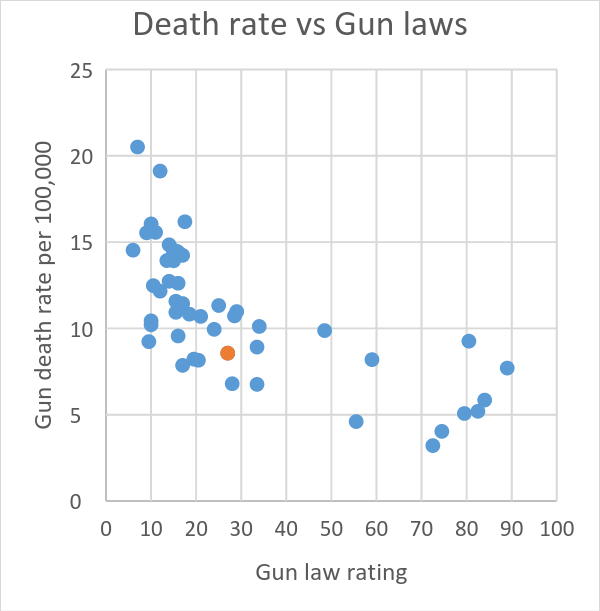 Switzerland and Israel are often pointed to as examples of countries with a large number of guns but few gun deaths. An article in the Washington Post argues that “Israel and Switzerland are not gun-toting utopias.”

Within the United States comparisons of states pretty conclusively show that a high suicide rate is associated with weak gun laws, but are much more ambiguous when it comes to homicides. The Law Center to Prevent Gun Violence and the Brady Campaign to Prevent Gun Violence, two advocates of controls on guns issued a State Scorecard rating state gun laws in great detail. When the ratings are plotted against gun deaths the result shows states with stronger laws regulating guns have less gun deaths per capita. (Wisconsin is shown with a red dot.)

This conclusion is almost entirely due, however, to the strong relationship between gun laws and the suicide rate. (For other studies that found correlations between gun deaths and state laws see here and here. Note that the first also found a correlation between state laws and homicide rates.)

As the next plot shows, there’s also a very strong relationship between the strength of the gun laws and the responses people made to a survey as to whether they had a gun in their home. Of course the direction of causality can go either way. With tougher laws fewer people may keep guns around. Alternatively, low gun ownership may make it easier to pass gun laws. 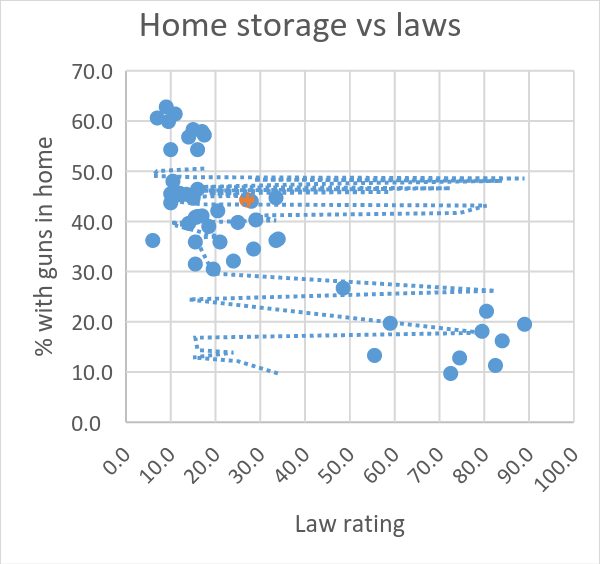 An article published in the Journal of Public Health estimated that firearms were used in more than 12,000 homicides in the United States in 2005, and that 84 percent of these occurred in large- or medium-sized metropolitan areas. It also stated that firearm homicide rates are highest among young men in large urban centers and have been rapidly increasing in this population despite a general decline in violent crime in most cities.

This very concentration in urban areas suggests one reason for the lack of a significant relationship between gun control laws and homicides. As the next plot shows the states with the strongest laws are also the most urban. 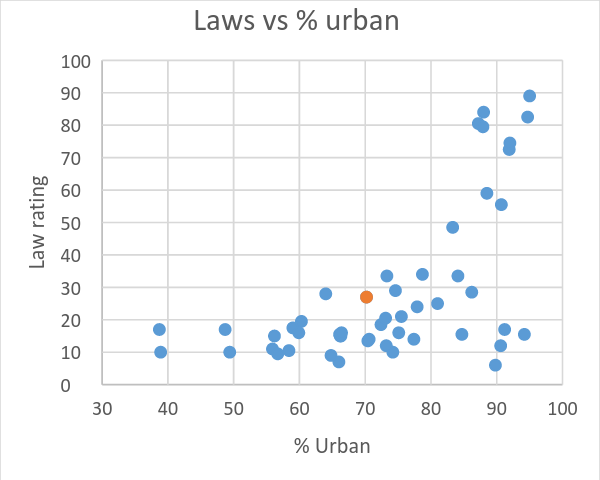 However, even if the problem of firearm homicides is predominantly an urban issue, grouping all urban areas together misses the important differences between urban neighborhoods. Consider two police districts in Milwaukee. District 1 includes most of Downtown and the East Side. It covers the UW-Milwaukee campus. District 5 is immediately to the west and north of District 1. 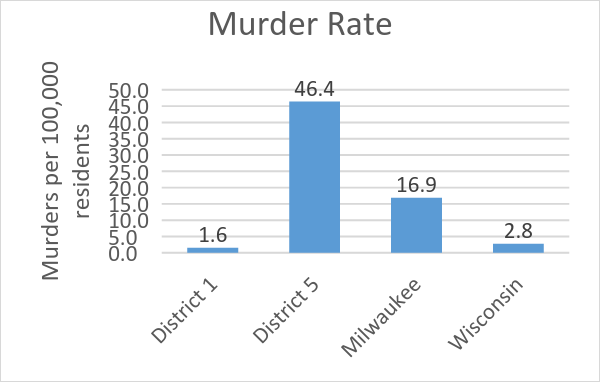 Rather than promoting more guns in District 1, perhaps a better use of the state’s resources would be to find ways to reduce the number of guns in District 5. This points out the need for more research. For example, how many people in each district have concealed carry permits? Is there a difference in the number of people agreeing that guns make them safer?

The next chart compares the annual rate of thefts. This is one area in which District 1 fares poorly compared to District 5 and Milwaukee as a  whole. Several factors could contribute to this difference, including that there are more things to steal in District 1 and perhaps a greater willingness to report thefts there. 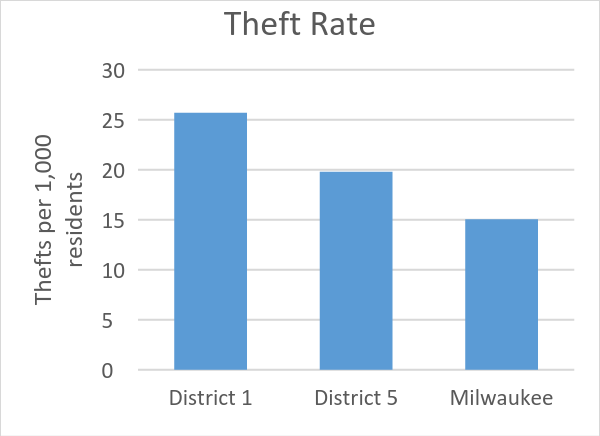 The model underlying the proposed law requiring universities to allow guns in their buildings is summed up by a cartoon recently published in the Milwaukee Journal Sentinel. In it a man and a boy are studying a Gun Free Zone. The man explains that, “It means this building is a soft target where law-abiding people can’t protect themselves from the violent intentions of others.”

The cartoon suggests that “violent intentions” lend themselves to rational planning. Yet FBI statistics suggest that most murders stem from an argument that got out of control and most victims knew their muderers. Of the homicides in which the police could identify the perpetrator, a fourth of the victims were family members and about half had some other relationship. 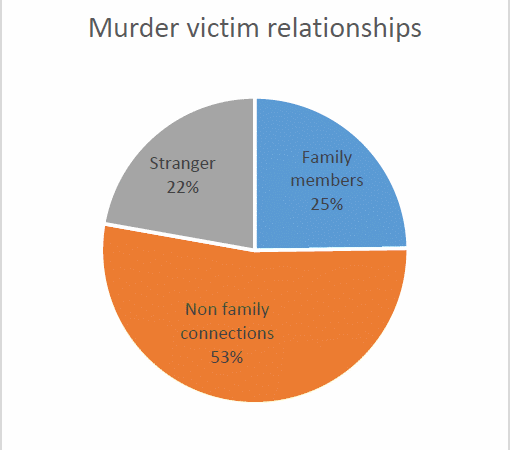 This would suggest that most murderers don’t think strategically. Perhaps thieves do. Rather than promoting the arming of people living, working, and attending college in Milwaukee’s 1st Police District, a more constructive approach might be to figure out how to reduce the arms war in the 5th District.