Then called Main St. and just south of Wisconsin, it boasted the Newhall House Hotel. 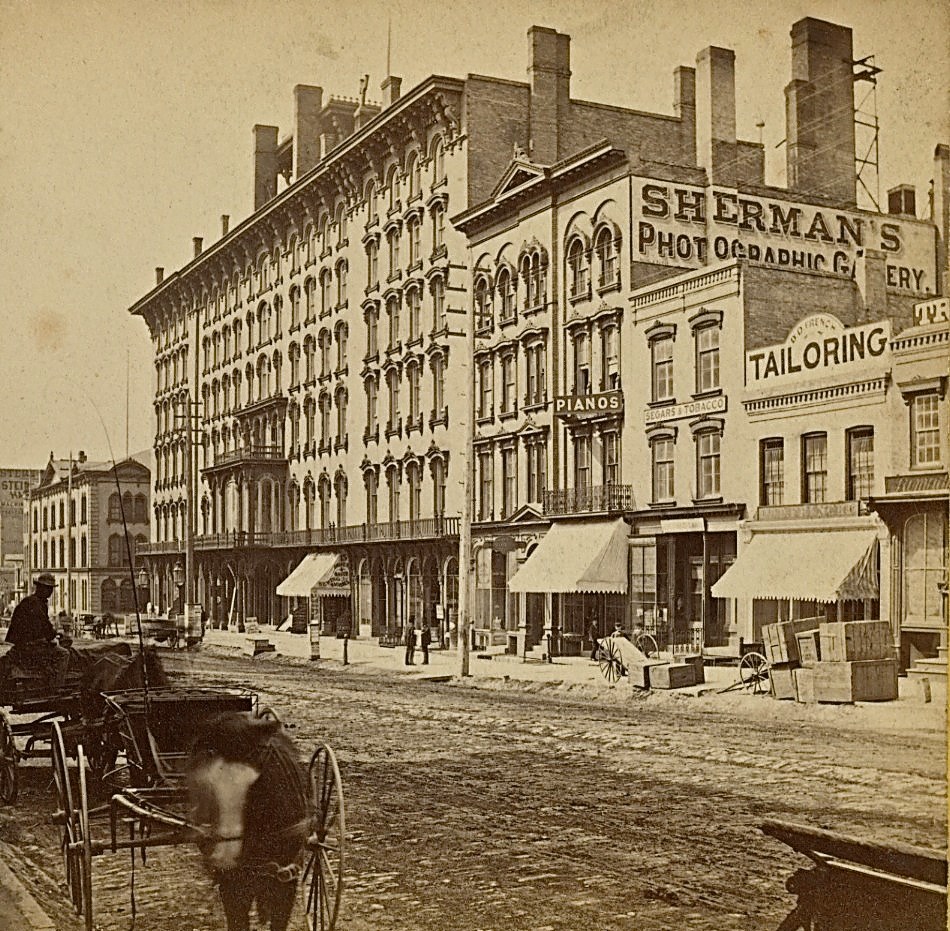 Our last three stories featured photographs of the block of Wisconsin St. (now now Wisconsin Ave.) between Water St. and Broadway. This photograph was shot just a half-block south, capturing the west side of Broadway just south of Wisconsin in the late 1860s. Actually, Broadway was then called Main St. and the Common Council changed its name to Broadway in 1870.

The sign for Sherman’s Photographic Gallery is impossible to miss. William H. Sherman was one of the pioneer photographers in America. He was born in Virginia in 1821 and operated a studio in Erie, Pennsylvania before moving here in 1860. This is actually his third location in Milwaukee for his photography studio.

His first location was on this block. That building would be ruined in a fire so he moved around the corner on Wisconsin St, before returning to this location in 1864. It was a fine location with the city’s largest hotel, the Newhall House, next door (at the left of Sherman’s building in this photo).

From the mid 1860s to the mid 1880s Sherman did a brisk business selling stereoviews of the city to tourists. He also was a prolific portrait photographer and also operated a piano business in his building. Sherman produced many carte de visites, mostly small portraits of Milwaukeeans. His stereoviews views were produced until the mid-1880s although most date before 1875. They provide a remarkable record of this period in Milwaukee’s history.

In the late 1880s, when the Photographers Association of America (PPA) was considering creating a memorial to L.J.M. Daguerre as the “father of photography,” Sherman was among those who objected. A 2012 story in the Daguerrean Society Quarterly describes it this way: “In especially outrageous language, Sherman claimed that Daguerre ‘had nothing to do with the discovery or invention of the art which they propose to commemorate.’ Calling the daguerreotype ‘an extinct species of which nothing exists but its fossil remains,’ and Daguerre ‘the father of an only child,’ Sherman scorned the PAA’s mission to “glorify the hero of a failure.” They rejected his advice and honored Daguerre.

The smaller building to the left of the Newhall House (and at the far left of this photo) is the Chamber of Commerce building, which would be replaced in 1879 with its newer building, which included the famed Grain Exchange, and later became known as the Mackie Building (and which still stands today).

Amazingly, Sherman’s studio would narrowly escape another fire, the epic 1883 Newhall House conflagration that would destroy the hotel and claim dozens of lives. The hotel would be replaced with a new headquarters for the Northwestern Mutual insurance company, a fine structure that also survives.