Why Estabrook Dam Must Be Saved

Removing it could cost more, damage environment and foreclose innovative solutions. First in a series.

Over the past year, the Estabrook Dam has been in the news with increasing frequency. The aging dam owned by Milwaukee County is under repair orders from the Wisconsin Department of Natural Resources and is subject to both a lawsuit and ongoing controversy regarding its future. A broad consensus favors removing the dam, including Milwaukee County Executive Chris Abele, environmental groups, the Milwaukee Common Council, Shorewood Village Board and Milwaukee Metropolitan Sewerage District (MMSD). The majority of county residents support dam removal, county supervisor Patricia Jursik has said.

Meanwhile, repair of the dam is favored primarily by a group of riverfront homeowners who stand to lose access to the three-mile impoundment — a kind of mini-lake formed upstream of the dam (at least until 2008, when the gates of the dam were opened in response to a DNR order, drawing down the impoundment). These homeowners have been supported by county board chair Theo Lipscomb, who lives in the area and has used parliamentary maneuvers to prevent the board from voting up or down on the issue of removing the dam. (The board voted to create a fish passage around the dam, and last week voted to override a veto of this by Abele.)

But could the consensus against repairing the dam be wrong?

Having been significantly involved in previous efforts to remove dams on the Milwaukee River (including helping to secure the funding used to remove the Lime Kiln, Newburg, and Campbellsport Millpond Dams), I am familiar not only with the compelling arguments in favor of dam removal, but also the sometimes questionable (or highly self-interested) claims used by those in opposition to removal. Motivated in part by my previous series for Urban Milwaukee on Milwaukee’s freshwater landscape, I decided to take a closer look at the debate on the Estabrook dam. I was surprised to discover not only a remarkable history for this segment of the Milwaukee River, but also to find that many of the technical arguments in support of removal do not hold water, pun intended. In addition, I am convinced the decision to remove or repair the dam is relevant to Milwaukee’s growing identity as a water technology hub. In short, this is a very important issue. 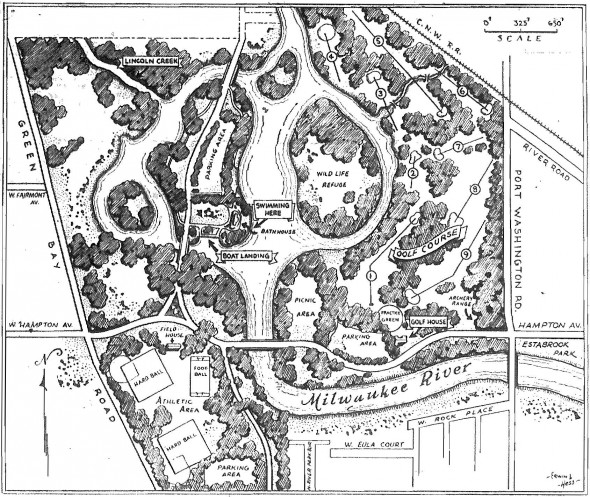 The design and construction of the dam occurred over an eight-year period from about 1932-40, in what could be described as an early water initiative focusing on this section of the Milwaukee River that included the development of both Lincoln and Estabrook parks. Comparing this earlier effort to Milwaukee’s recent water initiatives, it’s hard not to be impressed by its scope and accomplishments. The earlier initiative was the result of a decades-long collaboration between the City of Milwaukee, Milwaukee County, and multiple federal agencies, with stated goals not only of reducing flooding and enhancing recreational use of the river, but also preserving a unique hydrologic feature – a drainage lake that appears to have existed in the area of Lincoln Park since before the end of the Wisconsin glaciation.

Much of this work was done during the Great Depression and included a grand ambition – to create a public water-focused amenity in Lincoln Park that would be unmatched by any city in America in its combination of swimming, recreational boating, and ice-skating amenities. As is the case with Milwaukee’s current water initiative, this earlier effort included collaboration by the county and city with the university system (the hydraulics lab at UW‐Madison) which led to use of an innovative design for the spillway that combined beauty with greatly increased hydraulic capacity.   Whereas over $5 billion has been invested in recent decades for the stated purpose of making Milwaukee’s rivers “swimmable and fishable,” this goal was shared by the earlier initiative – which included preservation of the natural drainage lake that existed prior to the dam (through the construction of the dam which crested at the exact same elevation as a bedrock ledge removed for the flood control project), and through the construction of public beaches for swimming facilities at both Lincoln and Estabrook Park. The original design for the dam included construction of a fish passage (though it’s unclear whether this was constructed, removed at a later date, or ineffective). The dam has been described as obsolete, but the process and vision that guided its construction would appear to be in tune with that driving Milwaukee’s current water initiatives.

Some other key findings related to the dam as I now understand them, include:

Relative Costs: The impact of dam removal on adjoining property values (and associated property tax revenues) will likely be far greater than estimated in either the environmental assessment prepared for the dam, or in materials published by Milwaukee Riverkeeper or other advocates for removal. At the Mequon-Thiensville Dam – the nearest upstream dam on the Milwaukee River with a boatable impoundment – riverfront lots upstream from the dam (with access to the impoundment) are valued at approximately $74,000 per acre more than lots below the dam on the same street, and same neighborhood, but lacking access to an impoundment. If the impact on property values and property tax revenues is included in cost analyses, the cost for removal of the Estabrook Dam may actually be substantially higher than costs cited for repair and maintenance.

Environmental Benefits: The environmental benefits attributed to removal of the dam (reduced sediment accumulation, enhanced fish populations, general improvements in water quality) appear to be unsubstantiated by either actual data collected from this section of the Milwaukee River or by data collected from comparable rivers and dam removal projects. In terms of sediment accumulation, based on the storage capacity of the impoundment relative to the mean average annual flow volume of the Milwaukee River, the “sediment trap efficiency” of the impoundment should be nearly zero. In short, little or no sediment collects in the impoundment (beyond that associated with flow in other segments of the river). Not only are the environmental benefits largely unsubstantiated, but removal of the dam has the potential to result in negative environmental impacts to this segment of the river, given its unique hydrologic conditions – in part associated with the flood control project undertaken as part of that Great Depression water initiative, which excavated an approximate 7,000-foot long, 200-foot wide, and five-foot deep bedrock channel within which flow of the river is restricted in areas directly upstream from the dam site.

In spite of claims to the contrary, removal of the dam would almost certainly have significant negative impacts on recreational values within the three mile segment of the river impounded by the dam, as well as troubling environmental justice implications:

Perhaps the most important factor to weigh in evaluating repair versus removal is that a decision to remove the dam will be permanent. There will be no possibility of constructing a new dam at some future date, if a determination is later made that the environmental or flood reduction benefits were negligible, and the loss in property values, property tax revenues, and recreational uses were much greater than assumed. The option to remove the dam will always be a possibility, and a decision that could be made at some future date once there are better data available to document the negative environmental impact of the repaired dam (if any), the flood impacts (if any), and the preferences of residents in neighborhoods that should be included in any future evaluation process.

The term “saga” was used by Milwaukee Riverkeeper in a recent legal filing related to the dam, and seems an appropriate word for the contentious technical, legal and political process that has unfolded over the past eight years. This adversarial process seems at odds with the vision for Milwaukee to be a world center for innovation related to water technology and stands in contrast to the collaborative processes that have characterized the recent water initiatives (as well as that which led to creation of the dam and development of Estabrook and Lincoln Parks).

Flooding of rivers is a major global water challenge, and one that is projected to grow significantly over the next 15 years. A study published earlier this year predicted that the global risks associated with flooding of rivers would triple over the next 15 years, with the associated annual costs (converted to dollars) from flood damage rising from about $102 billion to around $534 billion. The challenge of designing engineered systems to alleviate flooding while trying to minimize the negative environmental impacts is a global water challenge to which the Estabrook Dam is relevant.

The challenges associated with the dam’s repair would appear well suited to innovations in systems to guard against power failure, to improve automation of the gates and to provide “real‐time” control in response to rapidly changing flow conditions during a storm event, and design of a fish passage that could enhance recreational opportunities as well as to reduce upstream flood levels. The possibility for this type of innovation to occur in Milwaukee seems quite plausible given its status as a leading global center for industrial controls (Rockwell Automation), advanced batteries (Johnson Controls), emergency power systems (Generac and Kohler Power Systems), and use of real‐time control systems for managing the flow of stormwater (MMSD). While it is nice that a water theme — a wavelike form — has been reportedly integrated into the design of the proposed Milwaukee Bucks arena, and that water features are being incorporated into the streetscape as part of design of the Lakefront Gateway Project, the Estabrook Dam would appear to represent a far more relevant canvas for demonstrating Milwaukee’s water‐related innovations and the budding water hub’s ability to design engineered systems to alleviate flooding while minimizing negative environmental impacts. It could be a wonderful test case of Milwaukee’s ability to be a leader in water technology solutions.

Abele is a great believer in basing policy decisions on best practices and financial efficiency, and has argued that removal of the dam would be “most environmentally friendly and fiscally responsible option.” That contention, though widely shared in the community, strikes me as dead wrong. With that in mind, this series will examine the saga of the dam in detail, beginning with a history of the segment of the Milwaukee River that includes the dam, followed by an analysis of key arguments related to costs, flood impacts, and environmental impacts or benefits. This will be followed by an analysis of recreational uses, the goal of swimmable rivers, and environmental justice considerations. The series will conclude with an assessment of the dam decision process in the context of the Milwaukee water hub initiative, with suggestions for an alternative path to pursue.

19 thoughts on “A Freshwater Controversy: Why Estabrook Dam Must Be Saved”