Models of various kind have proven useful in helping people understand the world we live in. Modern science, for instance, has developed through the development of successive models which have been tested in a series of experiments and as a result have been refined, accepted or modified.

Although useful, models come with dangers. One is that the model’s fans cease to recognize that the model is a representation of reality and not reality itself. The model then becomes ideology. Rather than attempting to describe what is going on, models become proscriptive—what should be done. Rather than asking what is most effective in dealing with a problem, the test becomes whether or not a solution conforms to the given ideology.

This is the trap that various interest groups have imposed on conservative thought in recent years. Rather than asking whether a policy is good for America, the test becomes whether or not it is “conservative” enough. Groups like Americans for Prosperity and individuals like Grover Norquist with his no tax pledge have been extraordinarily successful in marginalizing conservative thinkers who might hazard a fresh thought.

Republican office-holders who think for themselves live in fear they will be branded RINOS (Republicans in Name Only) and draw an opponent in their next primary. As a result, Republicans have largely stopped offering real solutions to real problems. The ideological purge has limited the ability of Republicans to come up with solutions to the country’s challenges. Here are some obvious examples:

Given the present ideological rigidity on the right, you might conclude that close-mindedness is inherent to conservative thinking. There was a time, however, when conservatives were offering fresh ideas for many challenges facing America. Solutions embraced by liberals today may have had their origin with thinkers on the right.

When originally proposed, pollution taxes were denounced by many environmentalists as a “license to pollute,” but supported by many conservatives for harnessing the power of the market to get a bigger “bang for the buck” than direct government regulations. The effectiveness of pollution taxes was shown by the sulfur tax on emissions from coal-burning plants. Yet when it comes to counteracting global warming a carbon tax is often viewed as a “liberal” solution.

A recent column in the New York Times by conservative economist and Romney adviser Greg Mankiw attempts to reclaim the carbon tax for conservatives. More likely it will help make him persona non grata in any future Republican administration. After all, if there is no global warming, there is no need for a carbon tax.

Another example is the Earned Income Tax Credit established under the Ford administration as a way to help people move out of poverty while not undermining their incentive to work.

Finally, ObamaCare’s individual mandate originated with the conservative Heritage Foundation as a way that health insurance could be expanded to those without it, particularly people at high risk, while not uprooting the existing health insurance market.

The right’s instinct for ideological purity has echoes on the left, including in Milwaukee, where there’s a similar reluctance to consider a free exchange of ideas, particularly in public education debates.

In common with most other cities its size, Milwaukee faces the question of what to do with schools in which most of the students are not mastering the skills they will need to prosper in today’s economy. One approach pushed by the past three MPS superintendents and advocated by the Obama administration is to convert some of these schools to charter schools, particularly charters with a record of success. 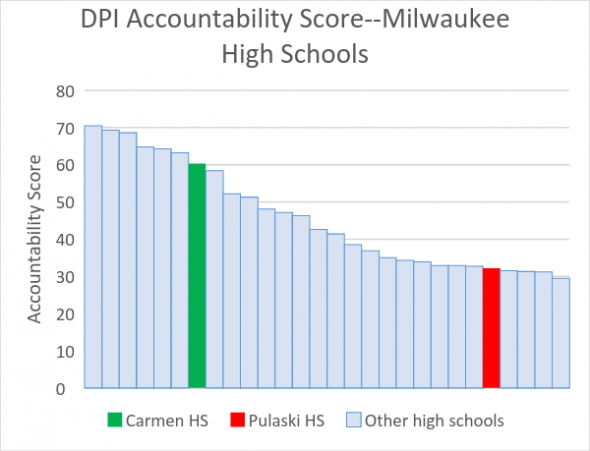 Recently the MPS administration proposed that Carmen High School be allowed to share space at the Pulaski High School building. A glance at student achievement suggests one reason this proposal would be attractive. The first graph plots the 2013-14 DPI Accountability Scores for the two schools, as well as all other Milwaukee high schools, including other charter schools. Carmen ranks much higher than Pulaski.

While Wisconsin is skipping the reporting of school achievement scores for 2014-15, it has reported average ACT scores for the previous year. These are shown on the next graph for the two schools and the statewide average.

In addition to addressing the achievement gap, this building-sharing proposal is attractive to MPS because Carmen is authorized by MPS, so that its students are included in the MPS students, helping the MPS budget.

Past proposals by the MPS administration to turn some of the schools with a concentration of such students into charter schools have often been rejected by the Milwaukee School Board under pressure from the teachers’ union. In response, the state legislature passed a law to have a several low-performing schools converted to charter schools under the control of the county executive. 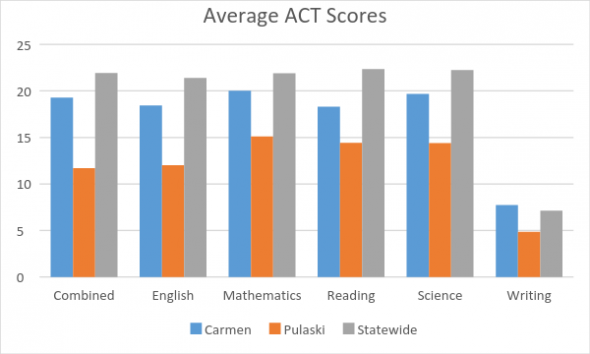 The latest proposal has come under fire from an organization called Schools and Communities United. Its membership includes a variety of organizations on the left, but the power seems to rest with the MTEA. Its mission seems to be protecting the status quo in education.

The opposition to the building-sharing plan offers a striking parallel with current arguments on the right. One is the lack of interest on offering alternatives that address the problems. For example, on the right it has become increasingly obvious there is no interest in addressing the challenge of people without health care coverage.

Similarly, there is no discussion of student achievement on the Schools and Community United web site nor is it mentioned in a Shepherd Express article that is highly sympathetic to the organization. Instead the concern that comes through is all about power–which adults get to make the decisions.

Both the far left and far right have other similarities. Both are hostile to testing and measurement. The SCU site includes a petition to encourage parents to opt out from testing. And the reason there is no 2014-15 DPI Accountability Score is that Walker and the Republican legislature, in trying to appeal to the Tea Party, put the state’s testing program on hold.

Another similarity is the emphasis on local control over considerations of effectiveness. The right wing accuses the Obama administration of federalizing education. For the left, attacking Obama would be politically untenable, so it finds other scapegoats, such as Milwaukee County Executive Chris Abele.

Americans for Prosperity finds its local analog in something called the Working Families Party. A very sympathetic article in the Shepherd Express makes it clear that its prime mission is to purge Democratic office holders who dare to disagree with some of its positions.

Any effort to impose ideological purity threatens those trying to develop solutions that actually work. This is true whether the effort comes from the right or the left. That the pressure for conformity is more advanced on the right does not remove the threat on the left. Political fundamentalism serves to close down discussion and makes finding solutions more difficult. You can see its impact on the Republican Party in Congress, on the presidential trail, and in Wisconsin. It’s hardly something to be emulated.