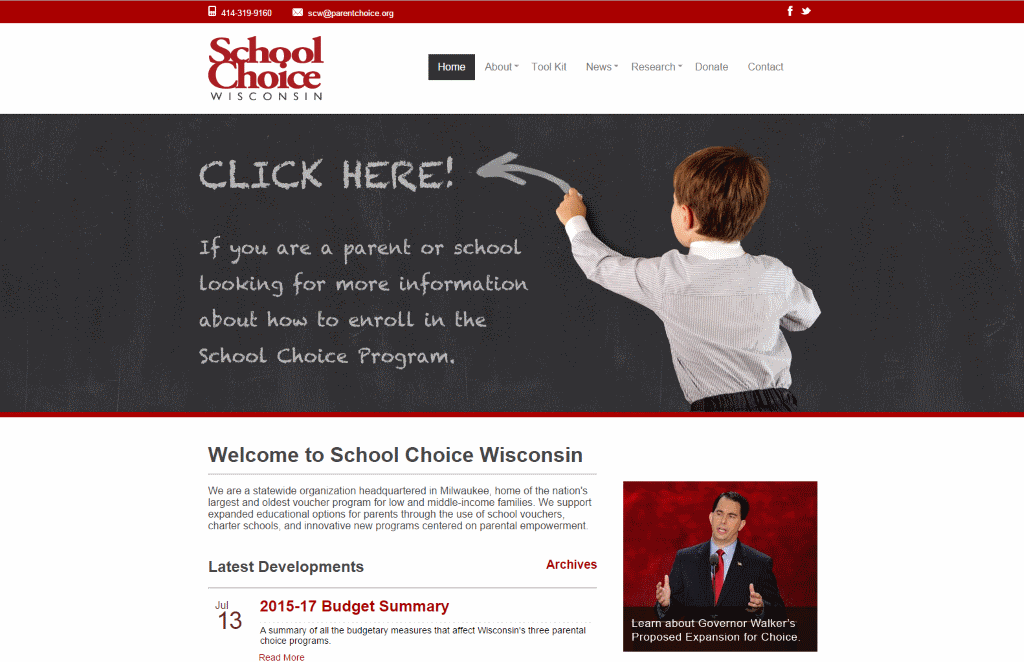 The School Choice program, which lets K-12 students attend private schools with tax-funded vouchers, began with 300 Milwaukee-area poor children attending seven schools in the 1990-91 school year. It resulted from a deal Republican Gov. Tommy Thompson cut with the late Democratic Rep. Annette “Polly” Williams, who split with other African-American legislators on the issue.

In the school year that just started, a record 32,100 children are expected to attend private schools at taxpayers’ expense. And Choice is now statewide: 26,900 of them are in Milwaukee-area private schools and 5,200 are in private schools in Kenosha, Racine and 23 other counties.

As the number of Wisconsin students in Choice exploded, so has its cost to taxpayers. Choice will cost $160.8 million this school year – 78 percent more than just four years ago, according to a new Legislative Fiscal Bureau memo. That doesn’t include a new tax deduction for private-school tuition expected to be worth $30 million a year to taxpayers who claim it.

Despite its 25-year history, Choice remains one of the most emotional fault lines in the Capitol. Republicans champion it; Democrats hate it more than ever.

Senate Democratic Leader Jennifer Shilling asked for the Fiscal Bureau memo which concluded that, in the period between the Republicans’ 2011 takeover of the Capitol and mid-2017, state aid to Choice schools will total $1.1 billion.

That $1.1 billion should have gone to public schools, says Shilling: “With declining family wages, a shrinking middle class and statewide teacher shortages, we need to stop taking money away from Wisconsin’s children and start investing in quality public schools.”

More than 50 private schools who participated in the Choice program have been kicked out of it for problems that included fraud, financial mismanagement and health and safety problems, Shilling notes.

Assembly Democratic Leader Peter Barca adds: “The Republican expansion of the failed voucher experiment will take hundreds of millions of public tax dollars directly from our neighborhood schools and divert it to private schools that the GOP refuses to hold accountable.”

But Republican Sen. Duey Stroebel, a champion of Choice, did his own math. “Taxpayers will have spent $59 billion on public schools” over the six-year period cited by Democrats, Stroebel says. “School choice is a mere 1.97 percent of K12 spending.”

Choice voucher amounts this year are $7,860 per high school student, and $7,210 for K-8 students, according to the Fiscal Bureau. So, because public schools statewide spend an average of about $12,700 per student, Choice is a great bargain for taxpayers, Stroebel added.

The dramatic expansion of Choice by Republicans in recent years – first to Racine and then statewide – came after three former Assembly speakers (Jeff Fitzgerald, John Gard and Scott Jensen) pushed for that growth as paid lobbyists.

Jim Bender, a former senior aide to Fitzgerald, is now president of School Choice Wisconsin. He said there is a very simple explanation – demand – for Choice’s dramatic expansion.

“Parents want options in education to find the best fit for their children.  Not a single student is required to enter the program, but on a voluntary basis, thousands of parents have gained access,” Bender said. “The Legislature created the program, but if nobody wanted to voluntarily join … it would fade away.”

And, Choice has not hurt public schools, Bender says. Instead, it “wrestled away some of the control from the public system” – power that many special-interest groups fought to keep.

Parents of Choice students also pay taxes, Bender noted. “The legislature expanded educational options for parents using state resources that everyone pays into. The public schools still receive the same, or more, money per child as they did before. They just have fewer students to educate.”

As a result, Ullsvik said in a statement, “Students and families across the Fox Valley are suffering from deep budget cuts, outdated facilities, and teacher shortages.”

Gudex, who won his 2012 election by only 600 votes, is a top target of Democrats. The electoral choice voters make may depend on how they view School Choice.

3 thoughts on “The State of Politics: The Explosive Growth of School Choice”