Compromise Is Possible on Waukesha Water

The solution is obvious, if environmentalists and Waukesha officials will compromise. 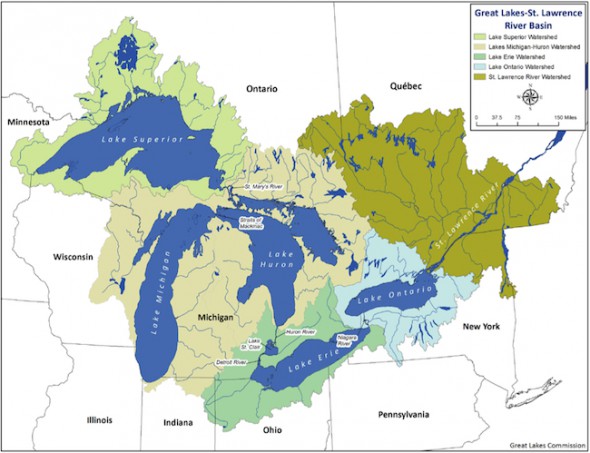 How can something so simple become so controversial and complex?

And what do we do about it?

Waukesha has a drinking water-quality problem – contaminated wells – and has been ordered by the federal government to find a new source by 2018.

Since it’s so close to Lake Michigan, Waukesha would like to construct a pipeline – we like to build things to alter nature – to transport 10 million gallons of water each day to the Milwaukee exurb. Voila, problem solved.

And because no one wants to threaten Lake Michigan, the good folks in Waukesha will clean up the waste water and send all that they take back to the “big lake.”

No harm, no foul. Waukesha gets the water it needs and Lake Michigan is preserved for generations to come.

It’s not that simple

But we live in a complex environment and society where the simple can be complex.

First, at a high level we believe in the principle that water should stay in its place. When it hits the ground, water flows in a direction based on topography and the water that hits Waukesha doesn’t flow to Lake Michigan.

Second, there are hordes of people in water-needy regions that would like to figure out a way to get Great Lakes water. In spite of its close proximity to Lake Michigan, Waukesha falls into the horde category – not the entitled one.

In 2008, to protect the Great Lakes from the hordes, the Great Lakes states plus Ontario and Quebec made a deal – a compact – that said no water can be diverted out of the basin.

Good so far, but now it’s time to hold your nose.

No water, didn’t mean no water; it meant some water.

Compact crafters arbitrarily decided that if you put less than 5.7 gallons of water into containers you can divert all you want. That was a concession to the bottled water industry and it became known as the “bottled water loophole.” Apparently companies like Nestle, Coke and Pepsi need preferential treatment codified in an interstate, international compact. I told you to hold your nose. It was so agreed for the sake of the deal.

This Waukesha thing was still hanging out there and Wisconsin said you have to give them a shot at Lake Michigan water – they have a need and they’re so close to that pesky geographical dividing line. It was c’mon, figure out a way or we may not agree to the deal, which would have killed it since all eight Great Lakes states had to be on board.

The sausage makers went to work and decided to make a city – say Waukesha – in acounty that straddles the watershed divide eligible. Got that?

Never mind that county lines are political constructs made by us mortals for purposes that have no relationship to nature, watersheds and conservation.

Did an agreement that could have been strong medicine become weak tea?

Fast-forward from the heady, celebratory days in 2008 when President George W. Bush (the son) signed the Great Lakes Compact and it became law.

The Wisconsin DNR is on the cusp of sending Waukesha’s diversion application to the other seven states for approval.

We’re now faced with the reality and consequences of the 2008 political deal making.

The state of Wisconsin says Waukesha’s request for Lake Michigan water is based on sound science, the law and it complies with the compact. It’s proof that the compact works as was intended say the pro-diversion Wisconsinites.

No, say the region’s environmental groups led by representatives from Wisconsin, Michigan and Ohio who spoke at recent public comment sessions in the Badger state.

They contend that Waukesha has alternatives to Great Lakes water which, if true, would be a deal breaker since tapping the Great Lakes has to be a last resort. Plus it’s asking for more water than it needs for towns in a “service area” – another man-made entity – that don’t have a need. That’s another compact taboo.

They base their positions on sound science, the law and say Waukesha’s request does not comply with the compact. In fact, they say if approved it could put the whole compact at risk because it will set a bad precedent.

I could argue this both ways.

Once the architects of the compact got creative with geography – the straddling county provision – they left the door wide open for Waukesha’s application. They fostered an expectation that Waukesha would get the water it needs. And while Waukesha has overreached with the amount of water it wants – the service area – it has made an otherwise credible case. Not perfect but credible.

Where to from here?

Once the compact’s strength was diluted with the bottled water loophole and straddling county provision, the precedent was set for arbitrary political compromise. That bill is due now.

If I’m the Great Lakes governors who have to give the request a thumbs-up or down, here’s where I am:

I say, Waukesha, you’ve made your case for water but while there’s a provision in the compact for a town in a straddling county, there’s none for a service area. You’ve overreached without a basis. Ratchet your request down to match your need and we’ll say yes.

To the enviros, I say, you long ago lost the moral and political high ground by blessing the arbitrary – straddling county and bottled water loophole – provisions of the compact. That makes it hard now to argue against compromise.

That’s it. Both sides can claim victory or at least not have to admit defeat.

That idea was intriguing. I decided to run it past a couple of the Waukesha principals who attended the recent public comment sessions in Wisconsin.

“Hmmm….. (pause) interesting” said Dan Duchniak, the general manager of Waukesha’s water department. Duchniak has been on the point for Waukesha’s request for years.

He didn’t expound on his “interesting” response except to say the compromise would have to be approved by city officials.

“The question … is an interesting one and could be an approach that might pass muster under the Compact,” Ambs said in an email.

Ambs has a unique perspective.

As the Wisconsin DNR Water Administrator in 2008, Ambs helped negotiate the Compact. He now works for the Healing Our Waters Great Lakes coalition but spoke on the record representing his own personal views. The coalition “does not have a position” on Waukesha, he emphasized.

While he acknowledged the possibility of a compromise, Ambs rattled off the reasons why Waukesha’s request should be denied.

Barring an epiphany — “we got it wrong” — the Wisconsin DNR will send the Waukesha request to the seven other states in early 2016.

The governors will have to decide and these aren’t the governors who were in office when the compact passed. They now have ownership of it but have shown little interest in it. At a recent Great Lakes governors conference in Quebec that celebrated the compact, only two of the eight governors attended.

The de-facto leader of that gubernatorial crew is Michigan Gov. Rick Snyder. He recently told the New York Times that the Waukesha decision should be based on “sound science and good economics.”

Snyder is a pragmatist, not an ideologue and my hunch is that he’d prefer a middle ground solution.

Absent the politics, the Waukesha decision is clear to me.

Waukesha overreached by adding the service area to pump up the volume. That was a bad move and it merits a denial of the request.

But we’re in the political realm and the stakes are high.

The parties should quietly huddle, work out a compromise and emerge with a united front to present to the world. That includes the hordes of water-needy states facing shortages.

They would like nothing better than a public legal scrap with Great Lakes states pitted against each other. They’re looking for an opening that reveals a lack of unity and exposes the weaknesses of the compact.

We can’t afford to provide that opening or even a trickle of water.

4 thoughts on “Op-Ed: Compromise Is Possible on Waukesha Water”