By Edgar Mendez, Milwaukee Neighborhood News Service - Aug 23rd, 2015 10:49 am
Get a daily rundown of the top stories on Urban Milwaukee 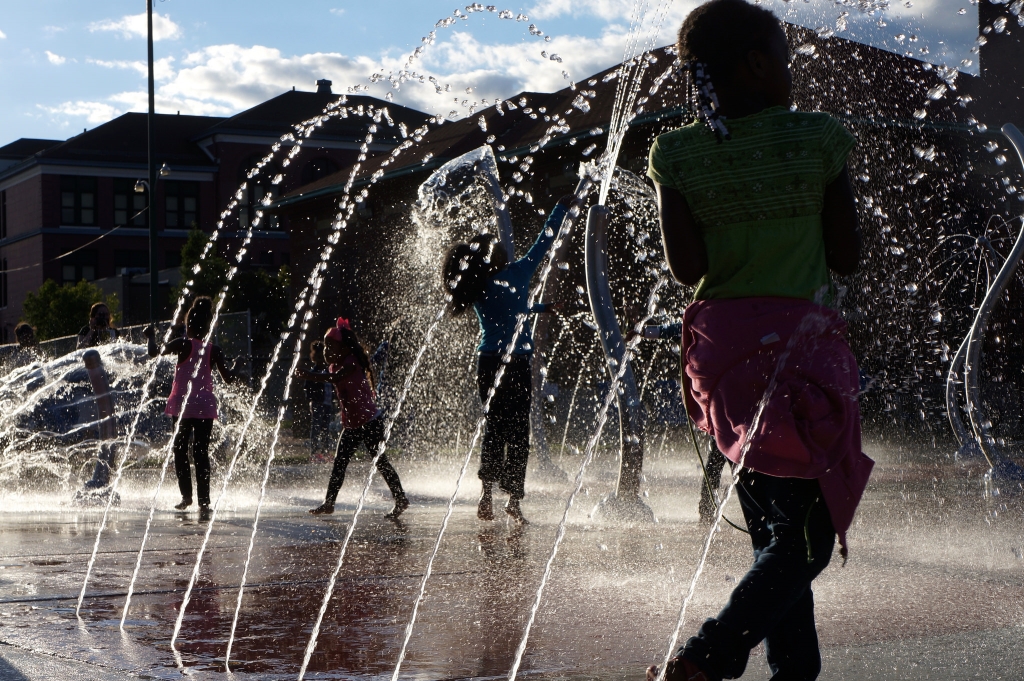 With official business done, the splash pad was turned on, much to the delight of neighborhood youth. Photo by Adam Carr.

Years ago, at the old Moody Park, 2200 W. Burleigh St., there was nothing to do but play basketball on a few broken-down hoops, said Lawrence Pollard, 13, who lives nearby.

“There wasn’t even nowhere to sit; but now there’s so many places to play,” said Pollard.

Pollard, his aunt and a few cousins from the neighborhood were on hand, along with hundreds of others, for the grand opening of the revamped and much-improved park.

Renovating the park cost $2 million, with funding coming from $5 million in bonds originally allocated by the Milwaukee County Board in 2010 to rebuild Moody Pool. The pool has since been demolished. The remaining funds are being used to rehab other neglected North Side parks including Lindsay Park on North 87th Street and Lindbergh Park in the Arlington Heights neighborhood.

New additions to Moody Park include a 3,000-square-foot community center, lit basketball courts, a picnic pavilion and splash pad. Ground was broken in late August 2014, and as recently as last month some residents questioned whether Moody would be open at all this summer. But, those concerns seemed a distant memory as kids, parents and neighbors gathered at the park to enjoy the opening day festivities, which included art lessons, chess, flag football and a concert.

During a Moody Park planning meeting earlier this summer, Tom Schneider, executive director of the neighboring COA Goldin Center, 2320 W. Burleigh St., said the key to the park’s future is to feature programming right from the start so that it doesn’t become a hangout for the wrong type of crowd.

That’s what residents said occurred after Moody Pool was shuttered in 2002. To avoid a repeat, Amani organizers and other community leaders have worked hand in hand with park officials to plan the grand opening and year-round programming.

Brenda Giles, chair of Friends of Moody Park, called the opening a great accomplishment, especially given the closing of Moody Pool. “This park is about the success of and improved safety of this community,” Giles said.

The park is one of many developments in the Amani neighborhood aimed at improving the quality of life for residents. Increased engagement by resident associations, nonprofits such as the Dominican Center for Women and private sector organizations such as Children’s Hospital of Wisconsin, along with an influx of city and federal funding, have resulted in a brighter outlook for Amani in recent years. Another recent development was the opening of the Burke Early Education Center (EEC), which is located in the COA Goldin Center.

The same type of community partnerships that have improved Amani also will make Moody Park a success, according to John Dargle Jr., director of Milwaukee County Parks. He said the “all hands on deck,” approach by community partners, residents, nearby schools and others would help to maintain safety and cleanliness at the park.

Javiantis Warren-Harmon, 14, rode his bike to the park for opening day and plans to spend most of his time on one of its several basketball courts. He vowed to do his part to keep the park clean and said he hoped others would too.

“I like that they have garbage cans all over, I just hope people use them and keep this park looking like it does today,” Warren-Harmon said.

Tiarence Morgan, 38, described the park as not just an improvement over the old Moody, but something grander.

“This park gives the community something to be real proud of,” said Morgan, “so we’ve got to keep it nice to show people what it means to our community.”

And though many in the park for the opening voiced concerns about safety in the neighborhood, Arlene Patterson, president of Amani United, said not to worry.

“We will sustain this park and we will have peace in Amani,” said an animated Patterson.