They condemn its business climate even as it out-performs Wisconsin. 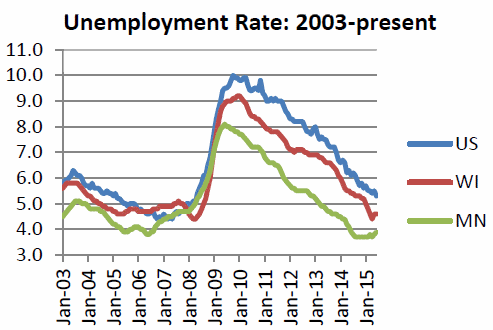 My recent column comparing Wisconsin’s economy to Minnesota’s triggered a number of interesting comments. Several readers questioned whether it was fair to compare Wisconsin to Minnesota.

There is no question the Minnesota economy has been outperforming Wisconsin’s in recent years on a number of measures. Consider the employment rate. As shown on the chart to the right, the rate has been steadily declining since its peak in early 2010, in Wisconsin, Minnesota, and nationally.

For the past year, however, Minnesota’s rate has stopped dropping, hovering just below 4 percent. Is that bad news for Minnesota? Economists disagree about what rate is consistent with full employment, but agree that it is not zero. In a healthy economy some number of people will be between jobs. 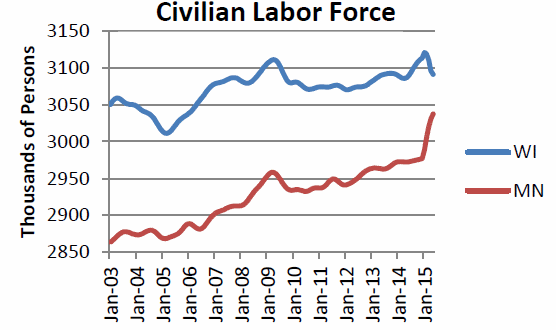 To answer the question, the next chart shows the civilian work force (non-military and aged 16 or over) for Wisconsin and Minnesota over the same period. (Both the unemployment rate and the work force are estimated from a monthly survey of households and are subject to sampling errors.) At a time when Minnesota’s unemployment rate has plateaued, its labor force has jumped. This implies that Minnesota’s strong job market is pulling people into its labor force, either residents of other states or people who were not actively job hunting.

Now consider the same two charts for Wisconsin. Its labor force has been much flatter than Minnesota’s yet its unemployment rate has declined from early 2010. Here the interpretation is less clear, but a part of the explanation likely reflects discouraged workers and those leaving the state, which has caused unemployment to decline despite little gain in jobs.

Comparing states to evaluate government policies is at best a tricky business. States differ in many ways, a number of which have nothing to do with government policy. Perhaps the most blatant recent example of ignoring other factors to prove a political point is the recent claim that right-to-work laws lead to more jobs—often putting a specific number on the effect—while ignoring the fact that states with right-to-work laws clustered in the South.

The Minnesota-Wisconsin comparison is attractive because it eliminates many possible sources of uncertainty. In essence each state is compared to itself. Does the switch to a different party have a noticeable effect on its economic performance compared to its previous trajectory with the other party? If one state is performing better than the other, does the gap narrow, widen, or stay the same when the governing parties are switched?

But looking at the same state over two eras tells us very little. The eight years before 2011 saw a worldwide economic collapse, while the years since have seen economic recovery in the United States. Without taking these differences into account, whoever served as governor before 2011 would be judged a failure and any since a success.

An analogy may be useful. Let’s say we are interested in evaluating the comparative effect of two diet and training plans on the performance of runners. Ideally we would randomly assign a large group of runners to one or the other of the two plans and then compare their performance over a series of races. If there were a significant difference between runners on one plan with those on the other, it would be reasonable to conclude that the difference was due to the plan.

Such a model, incorporating pairing and random selection, is sometimes described as the “gold standard” in research. Unfortunately, it is seldom available when it comes to public policy issues.

Assume instead that only two runners are available, one of whom is suspected as being better than the other. In addition, there are only two races, of radically different difficulties. Also assume that the promoters of Plan A are loudly touting its ability to improve performance. Given these restrictions, is testing the claims a hopeless cause? Even with these restrictions, it would be possible to do a rough test of the promoter’s claims. It might work like this: train the more able runner using Plan A for the first race and then switch, by using Plan A for the less able runner. Is there any evidence that the switch between plans effected the results? If the promoter is to be believed, the less able runner should exceed expectations in the second race while the more able runner does less well than expected.

This analogy fits the Wisconsin-Minnesota comparison. Let’s say the better runner is Minnesota, the first race is the period from 2003 to 2011 and the second race the 2011 to the present, and Plan A is the economic policies pushed by Walker and a slew of organizations on the right, including Wisconsin Manufacturers and Commerce (WMC).

A recent Journal-Sentinel op-ed by the WMC’s Kurt Bauer argues that Minnesota is the better runner, referring to an article by University of Minnesota professor Roger Feldman. Bauer says, “Minnesota has been outperforming Wisconsin economically since at least the 1960s. Feidman (sic) cites many reasons for this, including Minnesota’s diverse economy and the vitality of the Twin Cities.”

Bauer ignores the parts of Feldman’s article that don’t square with the WMC agenda. Feldman attributes much of Minnesota’s success to its ability to diversify its economy: “When the milling industry departed in the 1960s and 1970s, Minnesota switched to making computers and later to medical technology.” Feldman also notes that Minnesota spends more on parks and bike trails, whereas Walker has cut all public funds for state parks.

The Minnesota-Wisconsin comparison offers no evidence that the switch to a Republican governor in 2011 has benefitted Wisconsin’s economy nor that the switch to a Democratic governance has hurt Minnesota’s. This conclusion is consistent with experience in other states, notably Kansas which promised prosperity through slashing taxes.

Despite this, Bauer predicts doom for Minnesota, citing four violations of WMC orthodoxy: increasing the minimum wage to $9 per hour for most workers, expanding Medicaid, a lack of a right-to-work law, and raising taxes. The obvious lesson—that these measures haven’t had the negative effect predicted—is ignored.

Bauer also brings up state rankings: “many leading rankings on both business climate and economic outlook have shown dramatic improvement for Wisconsin since 2011 when Walker took office. Minnesota hasn’t done nearly as well in many of those same rankings.”

But most such rankings tell far more about the politics of those doing the ranking than the effectiveness of state economic policies. As soon as Walker was elected, a survey of Bauer’s own membership rated Wisconsin’s business climate far more favorably.

A similar phenomenon appears in the rankings from CEO Magazine, based on a survey of its readership. Wisconsin moved from 41st to 12th in the latest survey. Yet Minnesota, whose economy had performed much better, has been stuck with a ranking around 30th for the whole period.

But he who lives by the rankings, dies by the rankings. About the same time Bauer was writing his article, CNBC released its 2015 rankings of Best States for Business. Minnesota jumped to first place.

Where does this leave us? The model pushed by Walker, the WMC, and numerous organizations suggest that there is a trade-off: states wishing for prosperity have to sacrifice other things—including environmental protection, progressive taxation, public amenities such as parks and bike trails, a variety of transportation modes (rather than just auto-oriented transportation), and funding of education. But what if the sacrifice does not bring prosperity? Then the choice becomes easy.

If the benefits of the Walker-WMC policies are unproven, what about the costs? To the extent that success or failure of cities and states is influenced by lifestyle issues, by having strong public schools and universities and amenities like parks and recreation, the present policies may, in the long run, make Wisconsin less competitive.