Real version of fictional beer on “The Simpsons” now being marketed in Chile. 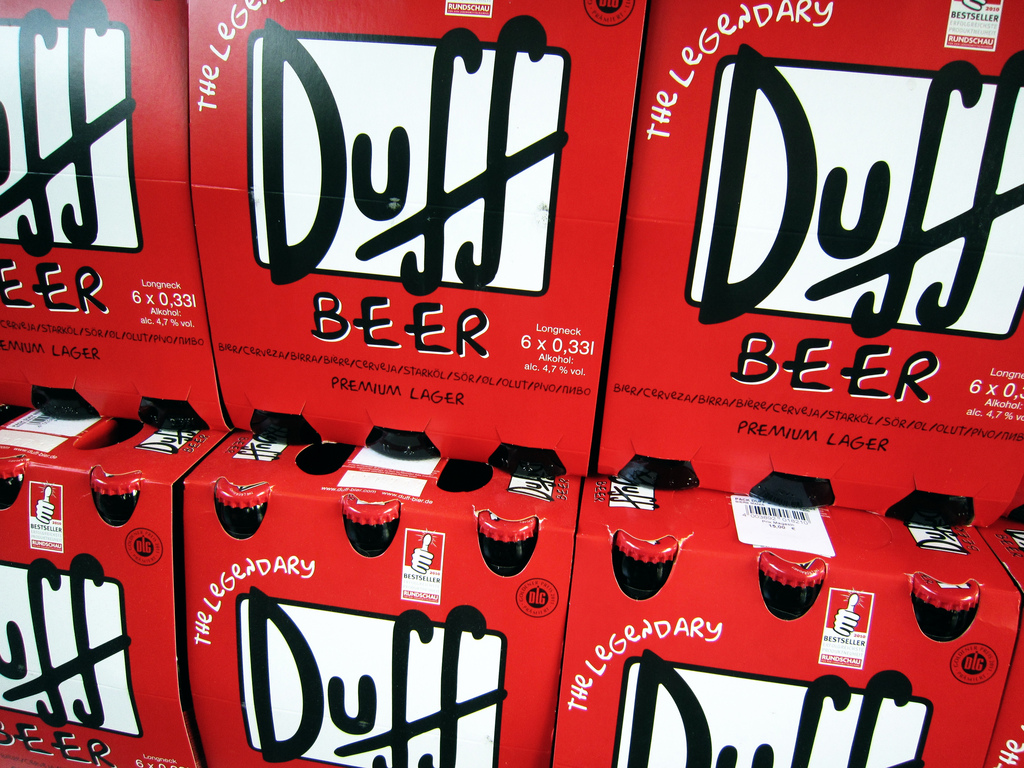 Duff Beer is one of the most iconic beers to never exist. Since 1989, Homer Simpson and other Springfield residents have been knocking back a cold Duff, while “The Simpsons” fans have been hoping for their chance to enjoy that “wonderful Duff.”

After countless other Simpsons merchandise, including a feature film, video games, and music albums, it’s often wondered why Duff Beer hasn’t made it to our coolers sooner. The reason was that the show is popular among adults and children alike, and there was a fear underage fans might seek out the product.

After all, the show touts the beer, ironically of course, with its official slogan,  “Can’t Get Enough of That Wonderful Duff,” while parking lot signs at the Duff brewery advertise “It’s Always Time For Duff” and “Now Leaving Duff Country”. In the segment, “Home’s Odyssey,” Duff is described as “The beer that makes the days fly by.”

Then there is the beer’s spokesperson, “Duffman,” a parody of Budweiser’s old mascot Bud Man. He is muscular, bleach-blond, well-tanned, with glistening white teeth and wears a blue leotard and cape, red Duff Beer ballcap, and a utility belt with cans of Duff Beer.

That’s a lot to get people of all ages intrigued while amused about a non-existent beer, so there was an understandable concern that offering the beer for sale might attract minors. But it’s the issue of piracy — various creators have tried to sell a version of Duff beer — that has forced the 21st Century Fox to finally bring Duff to market.

“Once you see enough piracy, you’re faced with two choices – one is deciding to fight, and the other is deciding to go out into the market with it,” says Fox executive, Jeffery Godsick, in an interview with the Wall Street Journal.

After successfully combating unauthorized Duffs around the world for much of the show’s run, 21st Century Fox is tired of fighting. So, in an effort to stamp out the imitations, the company has turned to British brewmaster Paul Farnsworth of the US-based Brew Hub, who describes his take on the iconic beer as a “premium lager with a caramel aromatic.”

Though little is known about the appearance and flavor of the new, real life Duff, given Farnsworth’s background as a British brewmaster, it seems likely the beer will be a version of a German-style pilsner, but without adjuncts such as rice (used in Budweiser) or corn commonly found in the well-known American Pilsner varieties brewed by the brewing giants. Furthermore, the presence of a caramel aromatic is likely the result of using a mid-range crystal malt that will add a distinctive caramel flavor as well as an amber color, depending upon the degree lovibond (lovibond measures color) of the malt used. As for the packaging, there’s no guess work necessary. The beer will feature the same designs as seen in the show.

Sadly, Americans will not be able to taste Duff, and make the days fly by for some time, for the beer is currently being test marketed in Chile. That’s the country where piracy and copyright protection has been the greatest issue. Should the beer prove to be a success, it will begin production and sale in Mexico and Europe by 2016. Currently, there are no plans to introduce Duff to the exceedingly crowded American market. No reasons have been given as to why American fans are being snubbed, but Godsick hasn’t ruled out Duff’s eventual release in the United States.

“I think there’s potential to have Duff everywhere in the world,” says Godsick.

Until Duff finally makes it official debut in the U.S., thirsty fans will either have to stick with their current favorite beer or risk buying a batch from over the border. But, if the temptation of having a Duff is too much but the risk of smuggling is too great, there’s still hope – the Universal Studios Orlando and Los Angeles theme parks feature a section dedicated to the Simpsons where Duff can be enjoyed legally.