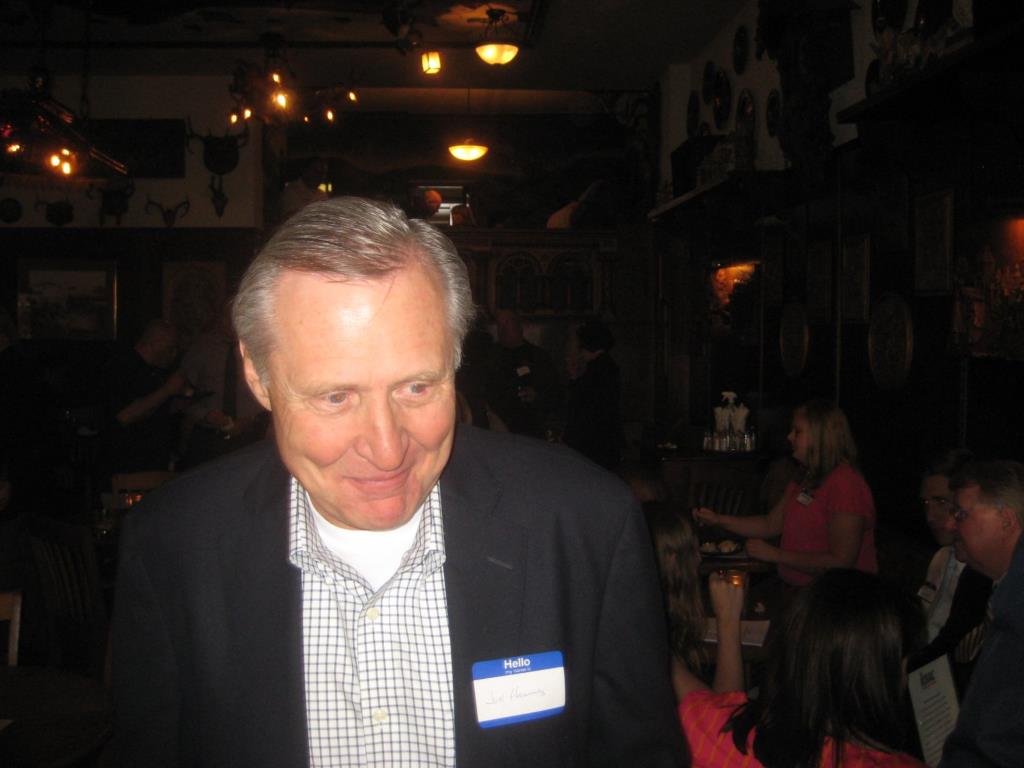 Jon Hammes at a fundraiser for Ald. Nik Kovac. Photo by Michael Horne.

Back when he was a Milwaukee County Executive, Scott Walker was opposed to spending any county money on a new arena for the Milwaukee Bucks. And after he was governor, he continued to resist the idea, until very late in his reelection campaign. At his second debate against challenger Mary Burke, Walker suggested he might support some state funding.

What accounted for the change of position? The International Business Times offers an explanation: Walker was rewarding his political supporter, Jon Hammes.

“Real estate mogul Jon Hammes, who has donated hundreds of thousands of dollars to Republican candidates and causes, is a prominent member of the investor group that owns Milwaukee’s NBA team,” the publication reported. “Last week CNN reported that he also will serve as the Walker campaign’s national finance co-chairman.”

A Walker campaign aide told the publication it was “a dangerous leap” for International Business Times to suggestion any connection between this and Walker’s support for the Bucks. “The stadium deal has been in the works much longer than he [Hammes] has been involved with the campaign,” the aide added.

“However, before Walker proposed the arena deal, Hammes had donated more than $15,000 to his gubernatorial campaigns, according to state campaign finance data,” the publication reported. “Federal records also show that over the last decade, Hammes has donated almost $280,000 to Republican candidates and third-party groups — including more than $14,000 to the Wisconsin Republican Party. Hammes Company in 2010 donated $25,000 to the Republican Governors Association, which that year spent heavily in support of Walker’s first run for governor. Jon Hammes also contributed $500 to Walker while he was a Milwaukee county executive… Hammes became one of the part owners of the Bucks in 2014. A little more than three months later, Walker unveiled his proposal to spend a quarter of a billion dollars on a new arena for the team.”

That’s a lot of prominent people to lobby politicians to support the Bucks bailout, but also a potential list of contributors for Walker, who is the most successful campaign fund raiser in Wisconsin history.

I checked the names of all those investors in the campaign donation records at the Wisconsin Democracy Campaign and didn’t find much. Jeff Joerres’ wife Sarah Joerres gave $7,500 to Walker, including $5,000 in Sept 2014; Ann Hammes of the Hammes Co. gave $10,000 a few days before the gubernatorial election; and Giacomo Fallucca, Jack Fallucca, Laurie Fallucca and Angelo Fallucca, all of whom listed their business as Palermo Villa, together contributed more than $15,000 to Walker over the years.

For someone like Walker, who raised $30 million for the 2012 recall race and at least $20 million for his 2014 reelection bid, that’s chicken feed. But I was only able to check the records for his publicly-accessible campaign. Walker, as we know, prefers that people contribute to third party groups with which he coordinates.

Walker assured tight coordination by having R. J. Johnson as a key campaign consultant, even as as Johnson was chief consultant for the Wisconsin Club for Growth. The now-terminated John Doe probe found there were many emails showing Walker secretly fundraised for the Club for Growth, that his staff advised the governor to “stress that donations to (Club for Growth) are not disclosed,” and detailed meetings Walker had with donors who soon contributed to Club for Growth, including a check to the club with a memo line saying the check was for Walker. Donations to such groups also have no limitation on the amount donors can give.

In the case of Walker’s presidential campaign, which effectively started almost the day after his reelection as governor, there really was no option but to give to third-party groups. Because Walker ran for president for more than six months without announcing he was a candidate or forming a campaign committee. But he was collecting tons of money through a non-profit called The “Unintimidated” political action committee, which allows unlimited donations that can all be made in secrecy. (It’s more than a little ironic that the “Unintimidated” phrase, taken from the title of his book touting Walker’s brave willingness to stand up publicly for what he believes, is now the name of a group that operates in total secrecy.)

A second non-profit formed by Walker, Our American Revival, has a different structure that allows unlimited contributions by donors but is required to periodically reveal contributions and expenditures. Walker has raised $6 million through this group so far but has raised far more, some $20 million, through his Unintimidated PAC.

It’s worth noting that the Bucks three biggest owners, Edens, Lasry and Dinan, are together worth more than $5 billion. They could have given generously and secretly to Walker’s support group, in order to help assure the huge 30-year taxpayer contribution to the team. Then you add millionaires like Klappa, Joerres, Kellner and others who are Bucks’ minority investors. It would hardly be a surprise if some of them contributed to Walker. That’s how the political game is played.

Except that now it’s played much differently, in secret. At least in Wisconsin, as a result of the recent Wisconsin Supreme Court decision, it’s now legal for campaigns to coordinate with groups registered as “independent” advocacy groups, and thereby benefit from unlimited secret donations. So we’ll never know who contributed the $20 million to Walker’s secret PAC or what kind of favoritism they might be seeking from him. That, frankly, is far more disturbing than the one connection — involving Hammes — that we do know about.

39 thoughts on “Murphy’s Law: Did Bucks Investors Pay Off Walker?”