He votes 90% of time with conservatives, but blasted Gableman’s majority opinion. 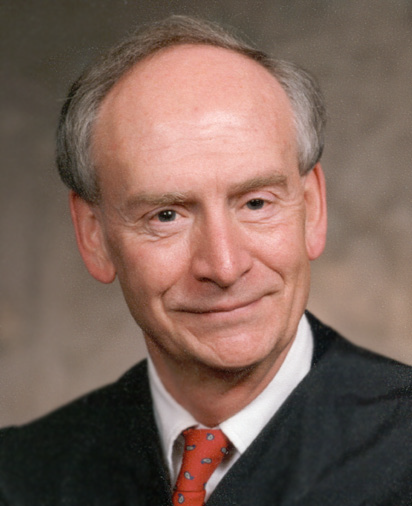 Patrick Crooks. Photo from the State of Wisconsin.

On Thursday the Wisconsin Supreme Court released a decision ruling that the John Doe investigation of alleged coordination between Gov. Scott Walker’s campaign and conservative “independent” advocacy groups violated the law and must be terminated. The Milwaukee Journal Sentinel did a story treating it as an ideological battle, contrasting conservative Justice Michael Gableman’s majority opinion with the dissent of liberal Justice Shirley Abrahamson.

But the newspaper completely ignored a dissent by Justice Patrick Crooks, a conservative who has sided with the court’s four member majority on about 90 percent of cases. And Crooks, in clear, common sense language, easily shot down the majority opinion. His dissent makes clear that this is a battle over what the law says, and the law clearly stands behind the Doe investigation, he concluded.

It’s telling that the leader of the court’s majority, Pat Roggensack, is nowhere to be found in this decision, though she signed on to the majority ruling. Roggensack is too smart to dirty her hands with this embarrassing decision, and so, while justices David Prosser and Annette Ziegler wrote concurring opinions, Roggensack doesn’t. She instead lets Gableman, arguably the court’s least qualified member, speak for her, with a decision Abrahamson derided for its “length, convoluted analysis, and overblown rhetoric.”

Gableman’s decision waxes on about the right to free speech, citing cases declaring that the First Amendment allows citizens to speak out politically, as though anyone disagrees with this. In doing so, he is simply channeling the arguments of lawyers for conservative operatives like Eric O’Keefe, leader of the Wisconsin Club for Growth, which was suspected of coordinating its funding and political ads with Walker’s campaign. To investigate this coordination, an outraged O’Keefe declared, hindered his right to political advocacy and free speech.

“But there is a simple solution to that problem,” Crooks dissent noted: “stop coordinating. In the absence of coordination, the contributor is free to discuss candidates and issues” and exercise the right to free speech.

But Gableman is so taken with O’Keefe’s argument that he calls O’Keefe and his fellow challengers “brave.” He declares that special prosecutor Francis Schmitz “has employed theories of law that do not exist in order to investigate citizens who were wholly innocent of any wrongdoing.”

But the legal theory behind the John Doe was quite simple. As Gableman himself describes it, the investigators contended Walker’s campaign and independent groups like Club for Growth and Wisconsin Manufacturers and Commerce actually “worked ‘hand in glove’ such that the independent groups became mere subcommittees of the candidate’s committee, thus triggering reporting and disclosure requirements under Wis. Stat. §§ 11.10(40” and secondly,”the coordinated issue advocacy amounted to an unlawful in-kind contribution to the candidate committee.”

Gableman’s response to this, Crooks notes, is to “erroneously” conclude that Wisconsin campaign finance law does not require a candidate “to report receipt of in-kind contributions in the form of coordinated spending” from which Walker benefitted. Worse, Gableman “inexplicably ignores” the prosecutor’s second argument, Crooks notes. “These mistakes lead the majority to terminate a valid John Doe investigation in an unprecedented fashion,” he declares.

Crooks charges that the court has ignored past rulings by the U.S. Supreme Court as well as a recent Seventh Circuit Federal Court of Appeals ruling on the John Doe which found that “no opinion issued by the [U.S.] Supreme Court, or by any court of appeals, establishes… that the First Amendment forbids regulation of coordination between campaign committees and issue-advocacy groups—let alone that the First Amendment forbids even an inquiry into that topic,” as Crooks writes.

Even before Gableman’s decision, there was reason to suspect its decision was a pre-ordained conclusion. As I have reported, the court’s four-member conservative majority is heavily beholden to two parties to this case. In their last elections, an incredible 76 percent of Prosser’s support came from Club for Growth and Wisconsin Manufacturers. For Gableman, the corresponding figure was 69 percent, for Ziegler 59 percent, for Roggensack 48 percent.

Schmitz therefore requested that at least two of the judges recuse themselves, given the apparent conflict of interest. They refused but issued no explanation for this, an omission which Abrahamson noted was in violation of normal procedure.

All of this screams out a conflict of interest, but Gableman’s opinion, and the concurring opinions by Ziegler and Prosser, make this conflict all the more obvious by over-identifying with O’Keefe and company.

“Justice Prosser opines at length, without the benefit of briefs or facts, about allegedly overbroad search warrants and subpoenas,” Abrahamson writes. “Likewise, Justice Ziegler opines at length about the allegedly unconstitutional manner in which the search warrants were executed… without the benefit of briefs or facts. Both justices opine about issues not previously raised by the parties or the court without giving the parties an opportunity to brief or argue the facts.”

Gableman, similarly, writes about the “paramilitary” style of the investigators, simply accepting the contention of O’Keefe’s lawyers without giving the prosecutors a chance to respond. Ziegler quotes from “media” accounts of alleged over-aggressive investigations, quoting the online Wisconsin Watchdog, created by the Franklin Center for Government and Public Integrity, which was heavily funded by an O’Keefe-run group.

Schmitz, in response to the court’s decision, released a statement charging that “particular justices assert as fact many allegations that I specifically denied in my response materials. There has been no fact-finding hearing conducted at any level establishing… that search warrants were executed unprofessionally or that persons were denied an opportunity to contact their attorneys. All of these search warrants were audio-recorded and it is wrong for the court to accept as true the information alleged…”

Meanwhile the decision ignores the evidence presented by prosecutors of coordination between Walker’s campaign and the “independent” groups, namely that R. J. Johnson both ran Walker’s campaign and was chief consultant for the Wisconsin Club for Growth, that there were many emails showing Walker secretly fundraised for the Club for Growth, that his staff advised the governor to “stress that donations to WiCFG are not disclosed,” and detailing meetings Walker had with donors who soon contributed to Club for Growth, including a check to the club with a memo line saying the check was for Walker. This and more was recently summarized in a Cap Times column.

Had this evidence ever been presented in court, a judge might have found this laundering of money through the Club for Growth allowed Walker to evade campaign laws that restrict the amount of donations made and require disclosure of the names of candidates. If proven, this would show that Walker was running a campaign that illegally used untold amounts of dark money to help win election.

But instead of letting this matter be adjudicated, Gableman and the majority have instead ruled than any such coordination can no longer be prosecuted. “The majority’s errors,” Crooks writes, will “limit the reach of Wisconsin’s campaign-finance law in a manner that will undermine the integrity of our electoral process.” The majority, he suggests, has “abused its power.”

The ruling will open the door to unlimited dark money being raised and spent by supposedly “independent” groups at the direction of candidates from both major parties. Gableman’s poorly argued decision — with no backing from past U.S. Supreme Court decisions — has driven such a huge hole in Wisconsin campaign finance law that “anything goes,” as Abrahamson wrote.

The result is a triumph for O’Keefe’s Club for Growth and the Wisconsin Manufacturers, who together spent $2.6 million to reelect Prosser, $2.6 million on the campaign of Ziegler, $2.3 million on Gableman and $850,000 on Roggensack. They spent generously and the justices rendered just the service these groups sought to purchase.