Formerly Cory the Bike Fixer, this East Side institution is all about service. 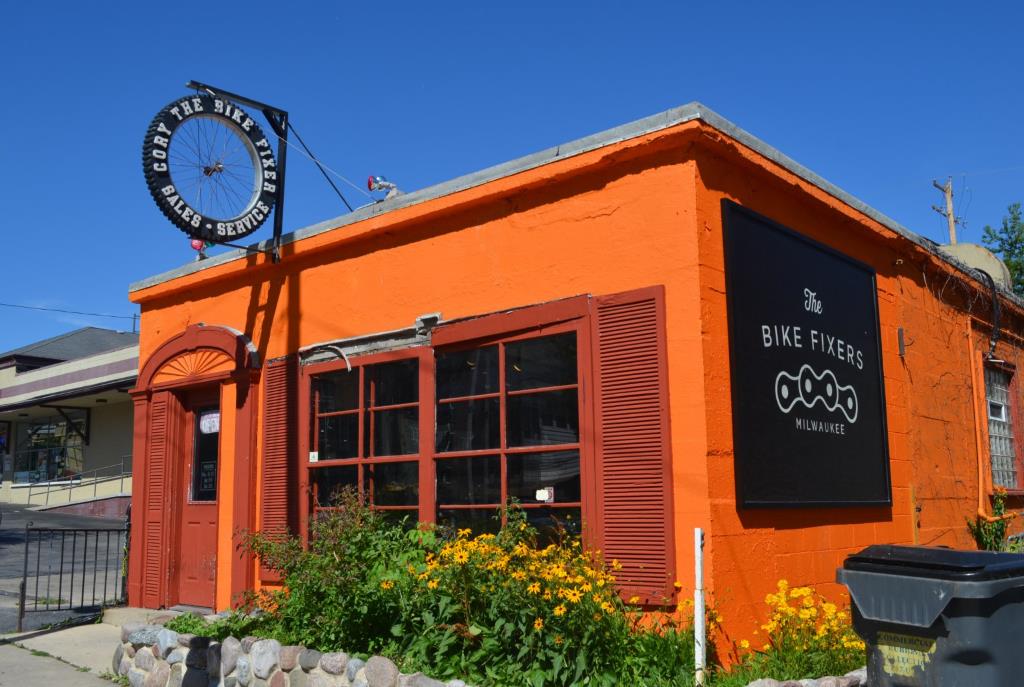 Nothing’s better than bicycling down the trails of Milwaukee on a cool summer day. But what if trouble arises and you need repairs — or need to find a new or used bike? That’s where The Bike Fixers, 2420 N. Murray Ave., formerly known as Cory the Bike Fixer, comes in.

The Bike Fixers sells 1,300 bikes a year and has been voted Best of Milwaukee in 2005, 2007, 2008, 2009, and 2012 by the Shepherd Express Readers’ Poll. Chase Hawk, the shop’s current owner, talk about its history and success and the joys of biking in an interview with Urban Milwaukee.

The business began in 1998 with Cory Gassmann. Gassmann started a one-man shop, known then as Cory the Bike Fixer, across the street from the business’s current location. He began with bike repairs for kids in the neighborhood, but the hobby quickly snowballed into a fully-fledged business.

Hawk met Gassmann when he bought a used bike from him. Over time, they developed a friendship. Eventually, Hawk started working at the shop in 2007 as the store manager.

In May 2013, Gassmann moved to Seattle, WA so his daughter can go to school there. He lives there today with his new shop, School of Bike, where instead of fixing bikes for people, he teaches people how to fix their own bikes. Before Gassman left, Hawk “stepped up to the plate and bought the business,” Hawk says. Now, while Corey still owns the building, Hawk is full owner of the shop, now called The Bike Fixers, and the 13 mechanics that currently work there.

Hawk says the transition went smoothly, as he had been handling most of the operations before Gassman left. And all nine of the core mechanics carried over to the new ownership. “It’s still all of us, it’s just that Corey moved on,” says Hawk.

The only problem was the rebranding. They became The Bike Fixers, but Cory the Bike Fixer was still on the door. And they didn’t have the time or resources for a complete rebranding at the time. “There was some confusion,” Hawk admits. “People were asking ‘where’s Cory?’” But by now most of the rebranding has been completed and “we’re ready to let our true colors shine and be The Bike Fixers,” as Hawk puts it. 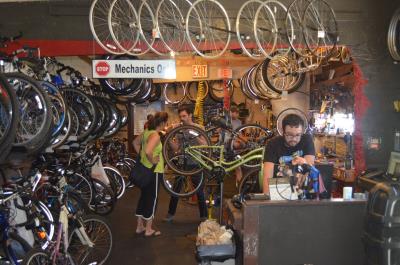 One of the biggest draws to The Bike Fixers is that the purchase of a new bike comes with unlimited, two-years free service. While you still must pay for parts, all the labor is free. The service has been there since day one.

“We always believe customers are the core,” Hawk says, “Yes, they’re customers when you look at it from a business point of view, but, to me, they’re people. I want to help people with their bikes; I don’t wanna just shove bikes out the door and just serve a bunch of heads.”

“Our strength has come from the voice of our people. That’s not going to change.”

The Bike Fixers are also looking into conducting riding tours. The business used to have bike tours, but they had to focus on the transition and put those on hold. But now they plan to take people as far as Harrington Beach and back. The tours will be a bit different from what’s offered at other shops; they allow you to get acquainted with any new bikes or gear you purchase and The Bike Fixers will give you assistance along the way.

Running Your Own Business

For people looking to start their own business, Hawk advises that you don’t have eight hour days; you have 18-hour days. “You’re always going to be the first one to get there. You’re going to be the last to leave,” Hawk says, “But in the end, everything you do is well worth its rewards. When you apply yourself, you can definitely achieve it.”

He also says that with any business, you have to take risks. But you can use past patterns and observation to turn risks into advantages. “You wanna be able to offer something different,” says Hawk. He then went on the paraphrase Thomas Edison, that “you go out on a limb, see if it works. If it doesn’t, then at least you know that.”

Hawk also says you’re not going to make everyone happy. “You’re always going to have that one where it wasn’t as good an experience. It could have been the day, the person’s mood, who knows?”

Hawk says the shop’s biggest challenge is refurbishing antique bikes. He’ll sometimes get requests to fix bikes that 50 years old or older, which means the original parts are not available anymore. So the customer either has to keep the bike in its original condition to retain its value or replace the parts with newer ones. “We would never send anybody out on anything that’s unsafe,” he notes.

“They are attached to them, for whatever reason, and that’s totally cool. I always hate to tell people, ‘I know you love your bike, but it’s pretty much on its last leg. That’s no news anybody wants to hear.”

The Bike Fixers is very conscious of the increasing competition from online sellers. Along with their increased digital presence through social media, their ace in the hole is the two-year, free-service deal. When you go online and buy a bike, you’ll save maybe $100-$200. But with the unlimited free service, you’ll be saving money every time you get your bike serviced. If you get a complete tune up two to three times over two years, you’re looking at saving around $350. Plus, when something goes awry or if you don’t know how to use your bike or your gear, then you can get hands-on assistance from someone and get immediate feedback. “I’m not a dinosaur, so I get that convenience [of shopping online]. But for us, we just want to be more involved with people rather than just being a storefront and so cut and dried.”

Hawk says the most rewarding aspect of fixing bikes is knowing you’re helping somebody. “Of course, it’s a business, we’re here to make enough money so that the business can survive. But overall, it’s not about the monetary value, it’s about helping people. It really is.”

The Joys of Biking

Hawk has been biking since 1985. He started with BMX, but then got into mountain biking and then road biking. And eventually into fixing bikes. Right now he rides a custom-made 2013 Salsa Tai Warbird. It’s a gravel-road bike, which is essentially a road racing bike with wider tires so that you’re not just confined to pavement. “That’s probably my last bike because I got everything just set up,” he says. “I kinda future-proofed it, if you will.”

Hawk says the most rewarding aspect of biking is you can go anywhere. “When you get past city limits and you’re really out there and enjoying your time, the scenery and everything, it will dawn on you, ‘this is why they do it.’ And then you wanna go see other places and [go] farther and further.”

While cars are great for covering long distances, you miss all the small details, he notes. “Even the scent in the air or even feeling the sun on you, you can’t get that in a car.”

Even back when Milwaukee didn’t have a very good infrastructure for biking, the biking community was still very strong. Hawk recalls riding up to Port Washington and doing the loop before the Ozaukee Interurban Trail even existed. Now that the infrastructure for biking has increased, people who may be reluctant to travel by bike are finding it easier to travel around, creating a wider audience for the biking community.

If Hawk could go anywhere in the world to bike, he would choose Northern Alaska. He calls it uncharted territory. It takes a wealth of knowledge and endurance and physical stamina to do it, he notes. “I’m sure it’s just crazy out there. I always wanted to go ride up there and touch the top.”

He’s been on long distance trips before, traveling from Milwaukee to St. Louis and back in four days or going to Michigan’s Upper Peninsula in the winter and camping on frozen lakes. “If you tell the average person, ‘Yeah, I’m from Milwaukee, Wisconsin,’… they’re like, ‘Holy cow! You rode your bike out here!? So you still experience a lot of people baffled by why people ride that far on a bike.”

“There’s times you’re completely beaten and miserable,” Hawk says, “but when you actually go through all those stages, riding that kind of distance, and you get back home alive, you have that feeling like, ‘Wow! I just did that.’ And then it just gets addictive. You’re like, ‘What’s next?’”

You can check out The Bike Fixers at 2410 N Murray Ave. Or check their website for store hours, prices for services, and links to their social media. 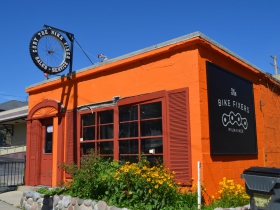 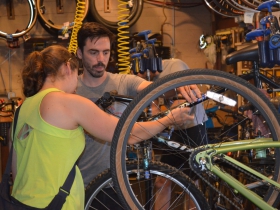 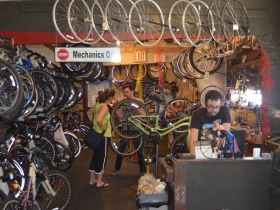 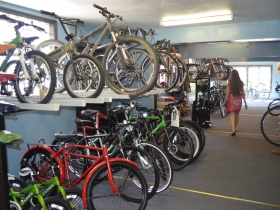 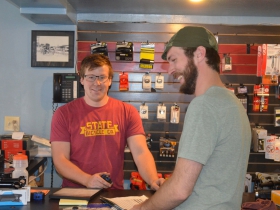 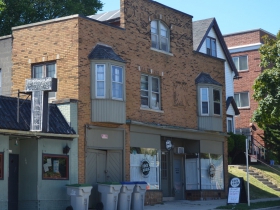 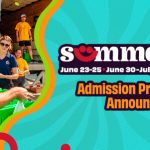