Bay Street Pub May Underwhelm You

It's definitely old Bay View, not the "other East Side." But the beer garden has charm. 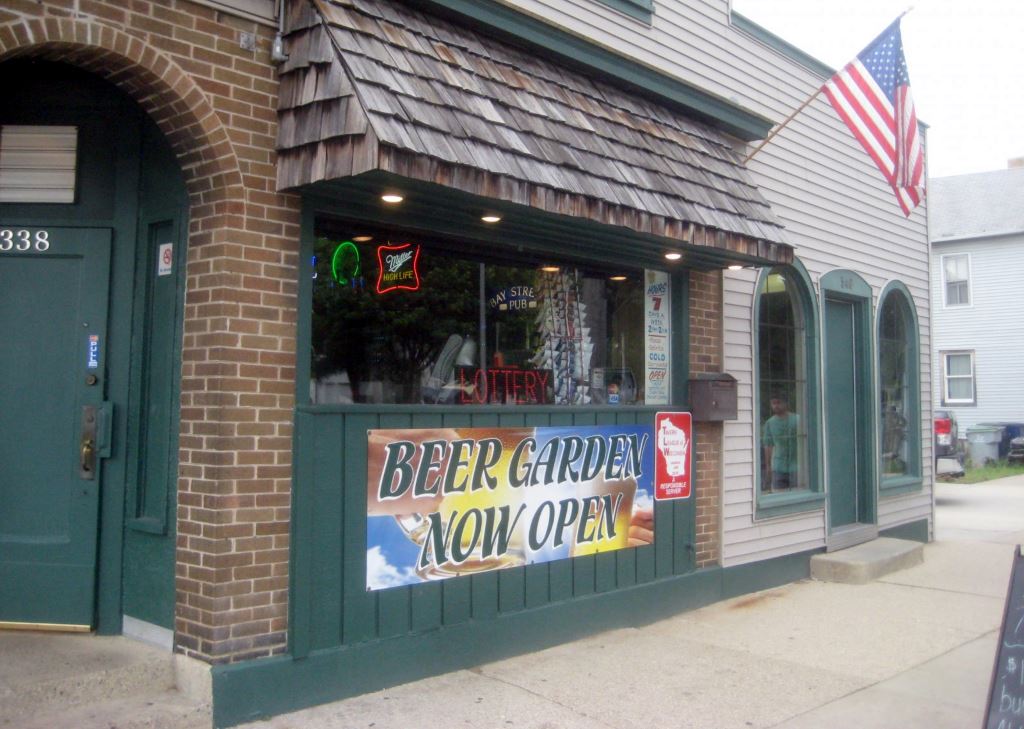 This corner tap is somewhat hidden though rather prominently located on the corner of E. Bay Street, from which it takes its current name, and S. Hilbert Ave., just a block east of Kinnickinnic. Although it is the first tavern a visitor encounters when entering Bay View from the north, it is relatively isolated from the bars that line KK once the neighborhood gathers its steam further south. And, whereas Hamburger Mary’s across the street practically screams, “Destination!”, the folks at this saloon are perfectly happy if strangers and gawkers simply pass them by.

This is a place where everybody knows your name, except for when they don’t, and in that case you might as well be nobody. The clientele is neighborhood folks, including workers from the nearby Klement’s Sausage Factory who might have brought a bag of beef sticks to share with friends. This is not Bay View as “The Other East Side” — this is Bay View as “The Same Old South Side.”

Inside, a notable feature is the old wooden ceiling that appears in a photo on the wall back from when this was a Miller Tied House in 1905. The bar from Miller’s was gone by the time the photo was taken of Tomazevic’s [Tominsek’s] Bar in 1949, and the ceiling had been lowered. The bar, with a little bump-out in the middle, seats 12 on swivelling, padded, backed barstools that fill up as soon as the shift ends. There are a couple of bar tables built into the west wall of the place. Venetian blinds filter the setting sun. Two wide screen televisions are above the bar, and there is a corner nook for the video gaming machines. One fellow was playing two machines at once. There is also a pay phone. There is a “lottery” sign in the window, a notice that the place will be open two hours before Packers games, and a huge banner announcing that the beer garden is now open. A sign board reads that $10 domestic buckets are available during all Brewer games. A neon Corona bottle is next to a Miller Lite bottle in the front window, nicely shaded by a green awning that, mysteriously, has not attracted pigeons and gulls despite its proximity to the Kinnickinnic River.

A projecting sign, painted over the former beer sign in red white and blue (including flag) announces the tavern’s name and the availability of “Pool Darts Spirits.” The pool table has more or less a whole room to itself, with a door leading to the Beer Garden.

Before we get there, take a look at the nice wooden fence and the River Birch [Betula Nigra], with its mottled bark. Hostas and phlox line the wall of the tavern, along with other colorful perennials. With this kind of landscape on the outside, the beer garden must be something.

And it proves to be so, filled with dozens of potted plants that the owner has overwintered somewhere. They are coming into their own this time of year, especially the coleus that seem to favor this secluded spot, with its umbrella tables and gas grill just asking to be fired up, maybe during one of those Brewers games. 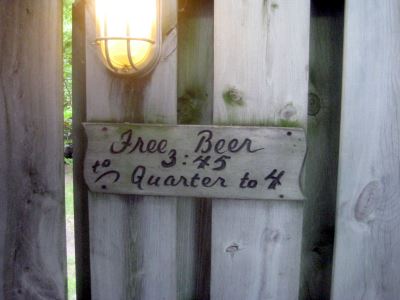 An engraved wooden sign informs us that there is “Free Beer — 3:45 to Quarter to 4.” There’s always a catch, isn’t there?

In 1909 William Zastrow spent $100 to remodel the front with new glass and sash and changed the doorway of this building.

In 1924 Ignatz Tominsek underpinned the structure with 10 inch block, which remains today. That cost him $350. It is remarkable how many buildings in this city were not built on firm foundations. This is not the first tavern we have seen to be underpinned. A very good reason for the underpinning is that it created a nice full-height basement where booths were set up and a speakeasy operated.

In 1930 Ignatz spent $720 on a fireproof garage on the site, removing an old barn on the north side of the building. In 1930, the average car cost only $640, so his “Soft Drink Parlor,” as it was listed in the city directory at the time, must have been quite popular.

Tominsek rode out the Depression and Prohibition, and in 1935 took out a permit to build the “storefront of masonry piers” that we know today, and which gives the old frame structure a little class. The Perma Stone Corporation of 2534 S. Kinnickinnic Ave. came by and re-sided the entire building using asbestos and 3-8 inch insulation. Thus things remained until Pabst replaced an old sign on the building with a “new plastic seal type sign.” The sign changed many times, morphing into Blatz, Old Style, and Blatz “Tominsek’s Tap,” over the course of the next ten years. In 1966 a four-foot high, 165-foot-long, chain-link fence surrounded the lot and the one next door, doing little to add charm to the place. In 1968 James Tominsek owned the real estate and rented the place to Patrick Malinger. Malinger called it “Pat’s Place” and in 1971 an Andeker sign replaced Blatz.

In 1976 the tavern adopted the style of “Scotsman Lounge,” and advertised Special Export Beer. Both Andeker and Special Export were premium beers, so this is an early example of Bay View trying to be fancy.

In 1981 the city told Malinger to fix the garage, which was “in very hazardous condition. North and East concrete block walls are failing.” Malinger fixed it by the end of the next year.

In 1988 a fire broke out in the upstairs apartnment, leading to $40,000 damage to the building and $3,000 to its contents. Considering the condition of the place at the time, that’s a near-total loss.

In 1994 Patricia Cohen ran the Scotsman, and in 1997 it became the “New Scotsmen,” operated by Chris Golombowski. Interestingly, The Scottish Register of Tartans shows no plaids for either the Cohen or Golombowski clans.

In 1999 the building was bought by its current owner, Mark Paschal, who called it “Tequila’s Sports Bar.” He got right to work and replaced the door and windows on the place, and cut a hole for a new window. He also installed vinyl siding, and commenced a number of projects that have greatly improved the appearance and value of the property.

Neighborhood “On The Way Down”

In 1974 the city assessor was not much impressed with this building and the general neighborhood. He valued the structure at “the lower end of the range. This bld’g is in bad cond., the neighborhood is on the way down.” The assessor found “poor cond. + much def. maintenance (siding, roof, door, + windows on garage. Pkg lot next door is littered. Fences + gravel are in poor cond.” As for the interior, in ‘fair cond. only,” the assessor huffed.

Things have come to a pretty pass indeed when even your gravel is in poor condition. That stuff is designed to last a half-billion years.

In 1979, the entire property was rented for only $500 a month. The assessor couldn’t find a way to squeeze more money out of the place. “Fair to poor ext. cond. much def. maint. Located off industrial areas & in neighborhood that is on the way down.”

Today, the building appears to be in great shape, and Bay View is on the way up, thanks in part to owners like Paschal who took old buildings that were beat up and turned them into valuable assets to the community. There is no more “Def. Maint.” here, although the beer garden could stand a power washing. Hey, that’s a reason to fire up the grill and see what the boys from Klement’s can bring over! 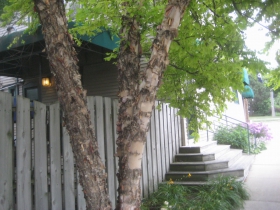 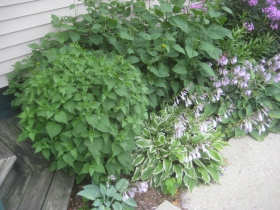 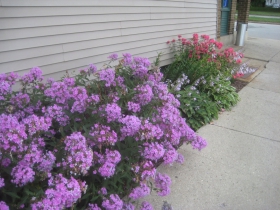 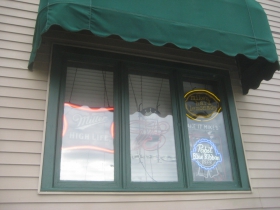 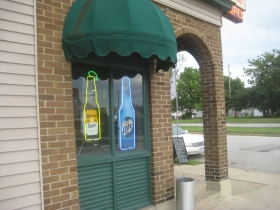 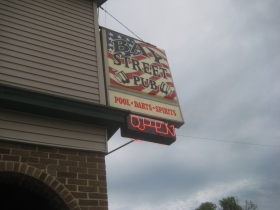 4 thoughts on “Bar Exam: Bay Street Pub May Underwhelm You”