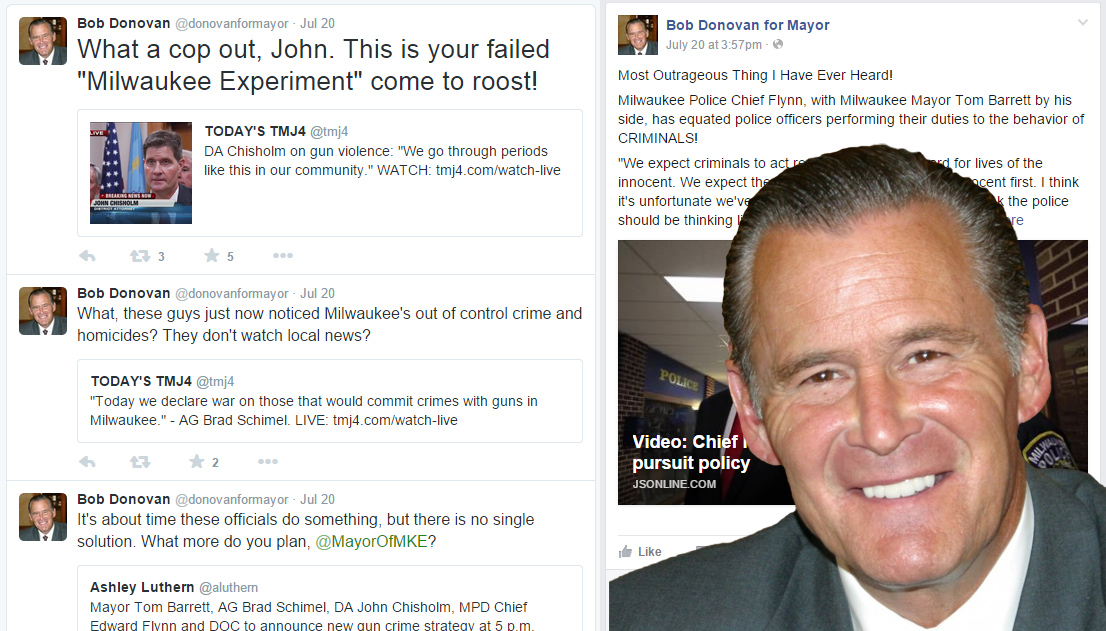 Alderman and mayoral candidate Robert Donovan has always been a master of issuing press releases and getting TV cameras to show up, but ever since launching his campaign for mayor he’s taken things to a new level. Donovan has become a prolific user of social media. That’s remarkable, for as one alderman told me in 2012, perhaps with a bit of hyperbole, Donovan “does not use computers” and doesn’t even handle email. So how did this sudden embrace of the last 30 years of technology happen?

Enter the man behind the voice, Steve Schumacher. Starting in April, Donovan’s July campaign finance report lists $5,000 in payments going towards Schumacher for the stated purpose of “Social Media Director” and later “Campaign Manager and Social Media Services.” The @DonovanforMayor Twitter account and the Bob Donovan for Mayor Facebook page have been mighty active in that time.

Who is Steve Schumacher? Besides being an expert at capturing the unique personality of Bob Donovan in Twitter’s 140 characters or less, Schumacher previously served as the social media manager for Sobelman’s Pub. Sobelman’s owner Dave Sobelman is a prominent opponent of the Milwaukee Streetcar, a project Donovan has long opposed. Sobelman has also donated $500 to Donovan’s mayoral campaign.

Schumacher had a strange run-in with the law in 2012 when he and his brother-in-law David Downer were found guilty in Waukesha County Circuit Court of three counts of attempted theft by misrepresentation — passing themselves off as newspaper deliverers for the Milwaukee Journal Sentinel. Schumacher and Downer had solicited tips from the newspaper’s subscribers by placing a card in their mailboxes during the Christmas season that said it was a pleasure delivering papers and included an address that was actually a mailbox at a UPS Store in Pewaukee. Police recovered 22 cards at the UPS Store containing $678 within a week of the cards being delivered. Schumacher, who worked at the distribution center for the Milwaukee Journal Sentinel at the time, pleaded no contest to the charges and was fined $1,199.48.

Schumacher also appears on a list of Wisconsin deliquent taxpayers with $28,209.17 owed in back income taxes.

All of this raises the question: is Schumacher also the man behind the Stop the Milwaukee Streetcar Facebook page? The page is run by an anonymous figure who seems to have good access to Donovan (photo from his office) and Sobelman (photo). The page was prolific in opposing the project and supporting a petition drive prior to the project’s approval in February, but has been a bit more subdued since then. Schumacher also appears to be Facebook friends with many of the anti-streetcar candidates the page has promoted, including Chris Wiken and Michael Olen. Wiken, owner of The Packing House, has pledged to move from Brookfield to Milwaukee to challenge alderman Terry Witkowski. Olen intends to challenge council president Michael Murphy, but has yet to file a campaign finance report. We’ve tried to contact Schumacher and will update this story if we hear from him.

11 thoughts on “Eyes on Milwaukee: The Man Behind Bob Donovan”