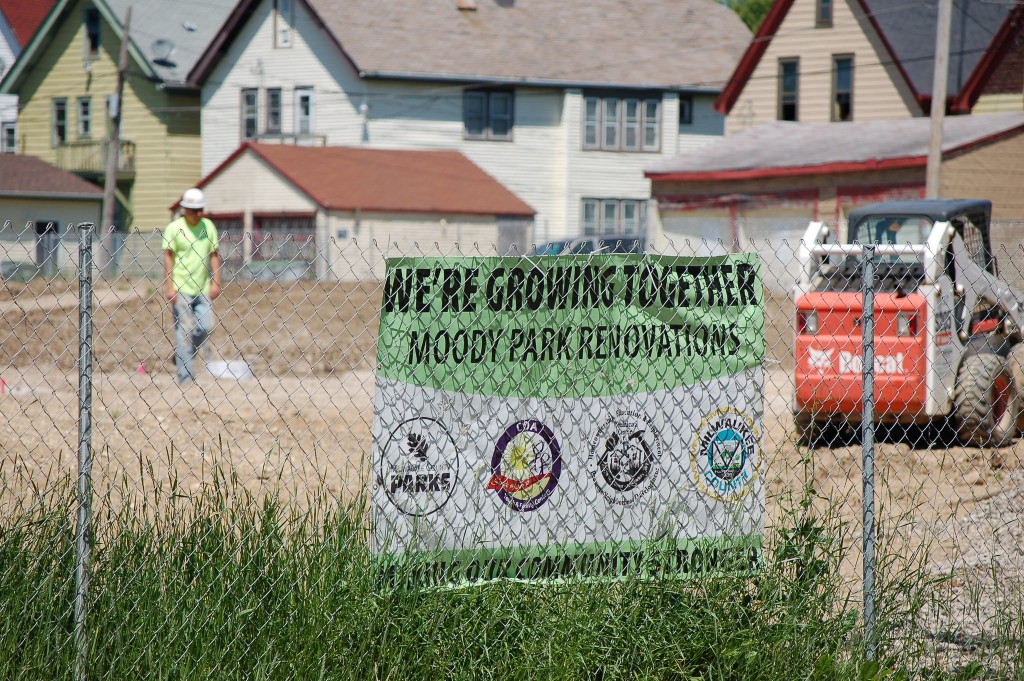 Once a haven for illegal activities, Calvin Moody Park, located at 2200 W. Burleigh St. in the Amani neighborhood, is nearly complete, with a grand opening set for Aug. 20, according to organizers.

New amenities include a 3,000-square-foot community center, which is already completed, as well as walking paths and lit basketball courts, which are still under construction. Also, a long-shuttered indoor pool on the grounds, demolished in 2013, is being replaced by a splash pad.

The reconstruction of the four-acre park is part of a $5 million investment in several Milwaukee County parkslocated on the city’s North Side. Recently completed projects include new playgrounds at Carver Park, 911 W. Brown St., and Kern Park, 3614 N. Humboldt Blvd. and new walkways at King Park, 1531 W. Vliet St., according to Jim Keegan, chief of planning and development at Milwaukee County Parks. Moody needed the most work, as evidenced by the project’s $2 million price tag. 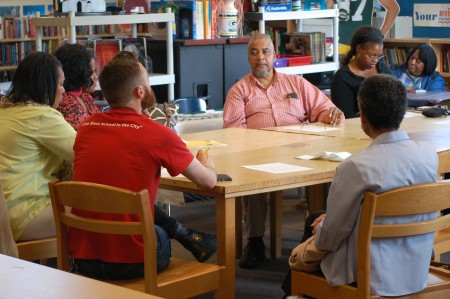 There have been a few mishaps during construction, according to Pepper Ray, Building Neighborhood Capacity Program(BNCP) coordinator for Amani, including a small fire at the construction site in April and recent reports of petty vandalism, but, she said, construction remains on schedule.

Currently, the park bears little resemblance to renderings shown to attendees at the Amani year-end meeting in late December, as mostly bones of impending projects such as the splash pad and small patches of grass dot the dirt-covered landscape.

That has led some nearby residents to question whether the park will actually be ready in time for the grand opening.

“Ain’t no way they’re gonna have this done by that time. No way,” said Andre Marlow, as he peered through the fence at the park while standing on the sidewalk on North 25th Street and Burleigh.

However, according to Keegan construction is going very well and grass will be planted and grown in the barren patches of dirt in time for the opening. Once the park is open the county will work with the community to provide appropriate programming, he said.

“We want to help provide a park experience that is … well utilized by residents,” Keegan said.

Stakeholders, including representatives from the nearby Dominican Center for Women and Auer Avenue School, will be encouraging Amani residents to utilize a space that for many years has been a trouble spot. Failure to convince nearby residents to take ownership of the park could doom it once again, said Tom Schneider, executive director of the COA Goldin Center, located next door.

“We need programming for residents right from the beginning or it could once again become a hangout for certain groups that want to cause trouble,” remarked Schneider during a recent Moody Park planning meeting.

Schneider and other stakeholders have been meeting for months to discuss engagement strategies and programming possibilities for the park.

On the table so far is everything from hosting Auer Avenue School soccer leagues for students, to baking contests, zumba classes and kickball leagues for adults. The idea is to hold programming year-round said Brenda Giles, who serves as chair of Friends of Moody Park.

“Getting people into the park every day of the year is critical to the safety of the park,” said Giles. She added that not even cameras could create a safer environment than if nearby residents and their children serve as the eyes and ears of Moody.

Amani resident Arthur West and his wife Leatha said they’ll be there to keep an eye on the park and have high hopes that it will become a central hub for residents.

“With the park, COA and the school, this area can be like a ‘go to’ place — a campus for the community,” said West.

If that happens Amani residents and nearby students will be the biggest benefactors, said Schneider, adding, “Successes like this breed empowerment for residents of the community.”