The House That Song Lyrics Bought 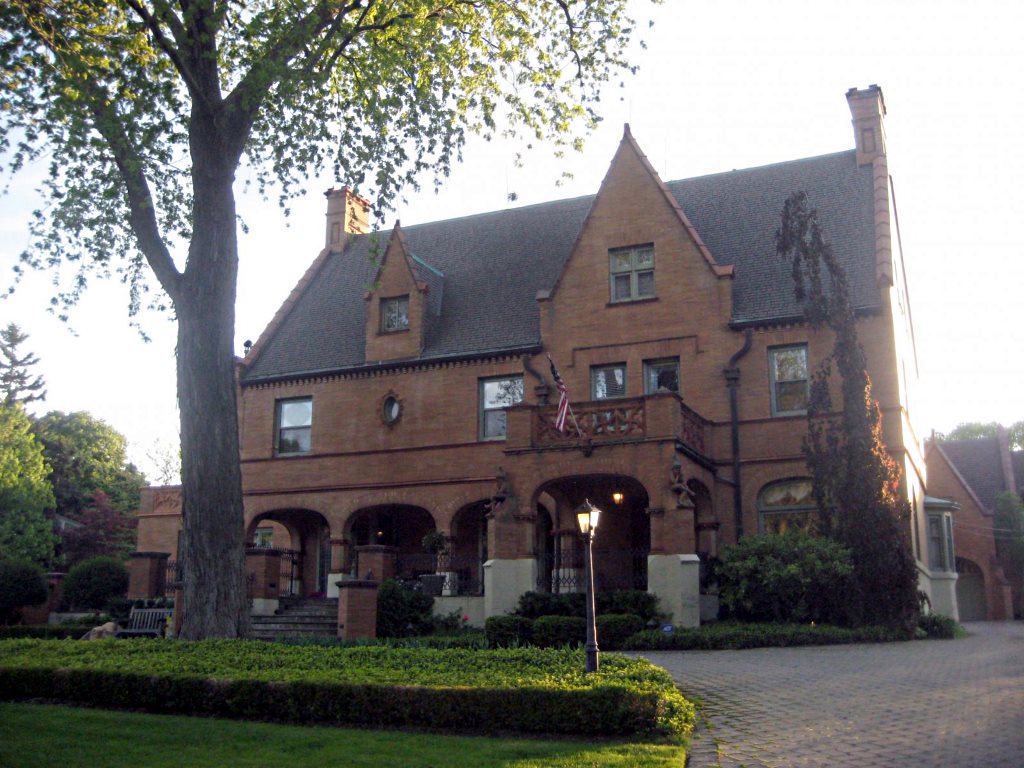 The House That Song Lyrics Bought. Photo by Michael Horne.

This large home with its pair of terra cotta guardian gnomes perched atop its portico is in an “ace” location across from the Lake Park Golf Course. “A.C.E.” also stands for the initials of the building’s well-known architect, Alexander Chadbourne Eschweiler, and the initials of one of the home’s owners, Albert Christian Elser, whose family held onto the place for nearly three-quarters of the 20th century.

But Eschweiler’s original client in 1896 was Edward G. Cowdery, the General Manager of the Milwaukee Gas Light Co., who decamped to a similar job in St. Louis in 1903. Eschweiler provided Cowdery with a 58 foot-by-60 foot-by-22 foot dwelling at a cost of $14,000, or around $375,000 in today’s dollars, which gives you the idea that utility executives have always been well-paid. Cowdery was a good client as well, paying the $3,700 masonry bill of Graham Brothers before the job was complete. This was a mistake, as Graham later stiffed its subcontractors, who were able to collect from Cowdery. If the payments had been properly structured according to the original terms of the contract, a court ruled, the construction bondholders would have been responsible for the debt. But by paying early, the contract was modified, the court ruled, and the insurance companies, once again, were off the hook. Lesson learned. Take your time paying your bills.

The home is a rather fanciful one for Eschweiler, with the gnomes enlivening what Journal Sentinel critic Whitney Gould called “the otherwise sober magnificence” of the Tudor Revival structure. Its orange and buff exterior is also something of a whimsy in the somber precincts of the Upper East Side, and the house has a nice setback from the street. It’s an imposing place by any measure. You’d be imposing, too, if you were 22 feet tall and 11,000 square feet.

Albert C. Elser and his family moved in to the house in 1908 after it had been rented for five years to William Hinrichs, the Vice President of Wisconsin Bridge and Iron Co.. Elser was born in 1871 and was the founder and president of the First Wisconsin National Bank and of its trust company. He came to this job naturally by having married in 1900 Mathilda Uihlein, the daughter of Alfred Philip Uihlein, the manager of the Joseph Schlitz Brewing Company, a principal stockholder of the bank and a big customer of the trust department.

[Many years later Albert Elser’s daughter, Elizabeth Elser Falk would marry Walter Kasten in what was a second marriage for both. Kasten, the grandfather of a future United States Senator, (Robert “Just call me Bob” Kasten) was at that time President and Chairman of the First Wisconsin National Bank and of its trust company. Such a small town, isn’t it, for those in the social stratosphere. But if we get tied up in Uihlein family genealogy, we’ll never get on with this tour.]

In 1911, perhaps tiring of taking the streetcar, Elser hired Max Fernekes architects to design a $4,000 30-foot-by-46 foot garage to the rear of the home, at what was then styled as 683 Lake Drive. This is among the earlier garages in the city, and since cars required a lot of attention in those days, garage includes a four-room, 1,855 square foot residence for the chauffeur/mechanic and his family.

By the early 1940’s both Elsers were dead, but the home remained in the family under the ownership of son Alfred Uihlein Elser, a director of the Schlitz Brewery, and his wife Gertrude, daughter of a former congressman named Hugo Deuster. Elser was the chairman of the board of the precursor to the Milwaukee Art Museum in the 1950s, among other gentlemanly pursuits.

Walking to the garage was becoming a nuisance for Elser, now that there was no chauffeur to pull the car around, and in 1957 he applied to build an enclosed breezeway between the dwelling and garage. The “breezeway,” at 11-feet-by-37 feet, was practically big enough to have a passing lane of its own, and after a few negotiations with the zoning board, the structure was approved. In June of that year, thinking of the winter ahead, Elser installed two 275-gallon oil tanks in the basement to replace the originals.

In 1966, thinking of the winter ahead, which would be his last on earth, Elser, 61, installed a gas furnace for the north part of the building. This place was no fun to heat!

In 1967 widow Elser had some changes made to the home, moving a door from the south wall to the east wall and switching some windows around. She built a 5 foot high block and stone wall on a solid 4-foot, 6-inch below-grade footing, and installed 68 linear feet of chain link fence on the south lot line, some 6 feet in height.

Around this time, the City Assessor dropped in to take a look around with Mrs. Elser. Boy, did he get an earful. “House is hard to heat. Burner works continuously. Attic rooms and maids rooms on 3 floor not being used. This is a luxury type residence, ‘very obsolete.’ Mrs. Elser says that if the tax bill is not reduced substantially, they will give the property to a charitable institution.”

By 1980 old Mrs. Elser was very obsolete herself, and the home was sold to Virginia Little around that time. Her tenancy was short lived.  By 1986 it was the home of Dr. Thomas Pelino, who spent $45,000 in 1991 to put drain tiles in the basement of the old home and to modify the front porch, which has seen its share of changes over the years. In 1992 Pelino’s residence, with its newly drained basement, served as the Milwaukee Symphony Show House, raising funds for the orchestra, and providing its owner with newly decorated rooms.

By 1997 the home was bought by its current owners, Keith R. Mardak and Mary N. Vandenberg, who paid $640,000 for the property, and began a spate of improvements that has not abated to this day. In fact, they didn’t move in for the first 2-1/2 years of their ownership.

The poor old chauffeur’s residence got $5,000 in electrical work, and the new owners put a good three furnaces down in the basement. They put in another furnace in the attic to serve the billiards room, which also has a fireplace, wet bar, ice maker, refrigerator and dishwasher. They tore out the 1957 pool and put in a new one, 40-by-16 feet.

The home the couple bought had passed the inspection of the Schley appraisal firm, which noted the foyer had a beamed, planked ceiling. The dining room wainscoting was 10 feet high.

Even the servants’ quarters, those old maids rooms that Mrs. Elser had shut off, received praise from the appraiser, who noted, “although third floor rooms which are typically designed as maids quarters usually are less well appointed than first and second floors, these third floor rooms have been completely renovated and are nearly consonant with the remainder of the house relative to condition and quality.”

There was a quarter-sawn oak floor and beamed ceiling in the stair hall, with a barrel vaulted opening to the living room and a columned opening to the music room, which itself had two walls of oak book cases with egg and dart carved molding, original to the home. There was an ornately carved quarter sawn oak mantlepiece and surround in the room “which probably came from Europe,” the appraiser noted.

Back in 1896, when the home was built, a music room needed functioning musicians and musical instruments in order to operate, and the egg and dart molded bookcases likely carried volumes of sheet music for the orchestra to play, since recorded music was unknown at the time.

Interestingly enough, Mardak was the owner of Hal Leonard Publishing Co., the Milwaukee firm that is the world’s leader in the production of sheet music, a business that still brings in millions of dollars, which Mardak has spent liberally on his home and on his charities. The most recent recipient of the Mardak-Vandenberg charities is the Boys and Girls Club of Milwaukee, which received a $5 million gift from the couple, its largest ever, last month. The money will fund the MarVan Scholars program at the organization.

Right off the bat, in 1997, the music lovers added 123 stereo loudspeakers to be installed throughout the home, and on a recent stroll down the sidewalk, they could be heard playing as flats of annuals, awaiting to be planted, dozed on the porch under the watchful eyes of the gargoyles.

The owners had to appear before the Historic Preservation Commission to get approval for some of the changes planned for the building, including a brick garden wall that cost $100,000. This wall seems to have some drainage issues today, and a little rivulet has formed below its bowed section at the south end of the property, where a lone garlic mustard sits at the property’s southeast corner in an otherwise weedless yard. The owners also had an extension of the garden room and breezeway, a $40,000 screened arcade, a cabana extension, a kitchen and master bedroom addition and new landscaping consistent with neighborhood design standards on their development agenda.

As Vandenberg noted in a newspaper article, “We’ve added lots of unique things like Japanese toilets.” In April, 1999, the owners sent in a certificate showing that their Toto Ltd. TCF-800 water closet seat complied with Chapter 145 and Chapter 180 of Wisconsin Statutes, and was approved by the State of Wisconsin Safety and Buildings Division.

Not all improvements were high-tech. Mardak is proud of his “Yell Hole,” an “old fashioned low-tech way to call down from the upstairs office to the Great Room.” No doubt his yell is a very musical one. 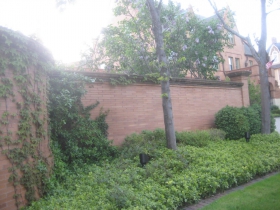 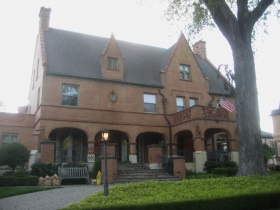 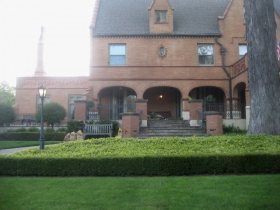 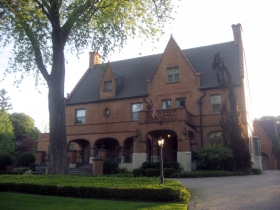 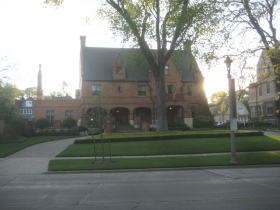 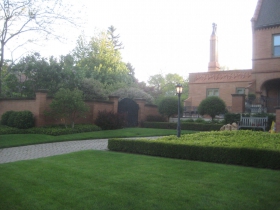 How Milwaukee Is It? It is 3 miles to City Hall.

2 thoughts on “House Confidential: The House That Song Lyrics Bought”