A columnist says goodbye with thoughts about our money-driven political system and what can be done about it.

By Bill Lueders, Wisconsin Center for Investigative Journalism - May 20th, 2015 11:10 am
Get a daily rundown of the top stories on Urban Milwaukee 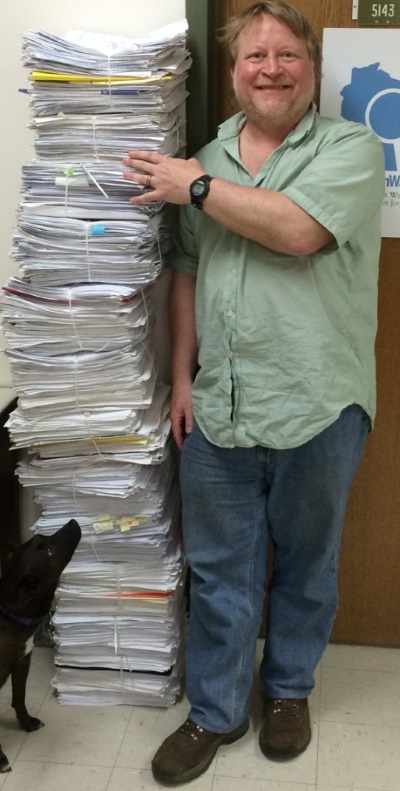 Bill Lueders with notes for his nearly 200 columns from the past four years. Photo by Sean Kirkby of the Wisconsin Center for Investigative Journalism.

Regular readers of this column know its fondness for numbers. Here is one more to ponder: This is the 199th offering since the column debuted in June 2011. It will also be the last.

During these past four years, the columnist’s meanderings into the busy intersection of money and politics have appeared in dozens of state newspapers and other media outlets. The newly bundled files for those first 198 columns reach a height of 5 feet, 3 inches, almost as tall as the columnist himself. He thanks his readers for their interest, and occasional kind words.

Being a journalist is about learning, and the columnist has learned a great deal from working at the Wisconsin Center for Investigative Journalism. Now he is moving on to fresh opportunities, including a job as associate editor of The Progressive magazine, launched in 1909 by legendary Wisconsin statesman Robert M. La Follette, a Republican.

Besides encouraging his readers to subscribe to The Progressive, the columnist wishes to impart some final observations:

While money can be a corrupting influence, our political system in Wisconsin is not, as some allege, irredeemably corrupt. As our inaugural column noted, “most people in public office are honorable, despite the nasty things they often say about each other.”

Mark Twain had a great line about Richard Wagner’s music being “better than it sounds.” Our political system is better than you would guess from listening to politicians, the columnist believes, even after four years of immersion in this topic.

But money clearly plays an outsized role in our elections and political process. According to the National Institute on Money in State Politics, Wisconsin state candidates and committees raised $100 million running for office in 2013-14. During that same period, lobby groups in Wisconsin reported spending nearly $60 million to influence state law and policy.

That’s a lot of cash, with no end in sight. Legislative efforts to rewrite Wisconsin’s campaign finance laws will almost certainly lead to higher spending limits and fewer worries for groups engaged in electioneering communications that fall (just barely) short of telling people how to vote.

The Republicans who control the Legislature want to overhaul the Wisconsin Government Accountability Board, the state’s election law overseer. There’s even talk about returning it to partisan political control, a demonstrably flawed model abandoned in the mid-2000s following a massive state scandal.

Meanwhile, the courts are busily beating back restrictions on letting well-heeled individuals and groups spend vast, even unlimited, sums trying to influence elections.

Even if some kinds of spending are contained, the gush of cash into the political process seems unstoppable. Rick Esenberg, head of the conservative Wisconsin Institute for Law & Liberty, which opposes spending limits, likens it to the arcade game Whack-A-Mole. There is, he says, “an endless supply of money.” Crush it in one place, it pops up in another.

“You can say, ‘Oh gee, I wish people weren’t spending so much money on politics,’ ” Esenberg says. “That’s fine. The question is, what are you going to do about it?”

There actually is something that people can do. We can raise the expectations we have of candidates for office, and ourselves. We can refuse to be led by the nose, as those who pump money into politics would like.

No citizen should ever cast a vote based on a television ad or an attack flyer. We need to be skeptical and discerning consumers of political messaging, asking tough questions like, “Who is paying for this, and should I trust them?”

In fact, not every issue goes the way special interests want, and heavy spending does not always translate into electoral success. No matter how much outsiders seek to influence the process, each individual voter gets to exercise his or her independent judgment.

That is the promise, and challenge, of our democracy.

Editor’s note: This is the final Money & Politics column. Its author, Bill Lueders, is leaving the Wisconsin Center for Investigative Journalism to return to his roots at two Madison publications.

13 thoughts on “How Political Money Corrupts”