Finally no more cheating. A new game created by local inventors has magnet-embedded foam weapons will record every successful hit. 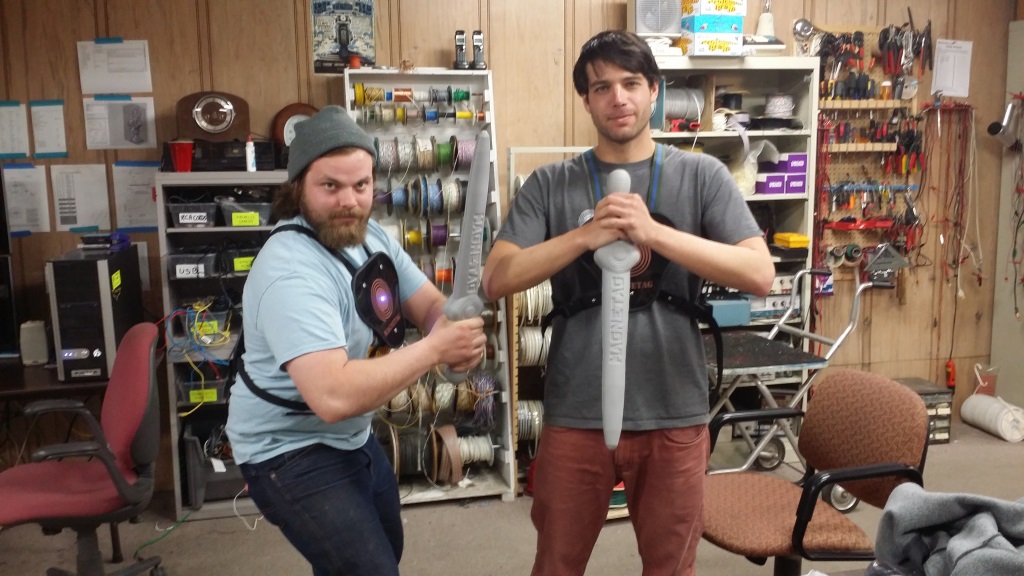 I feel like Iron Man as I throw the electronic chest piece over my shoulders and buckle the clips on my sides. I put on a pair of sunglasses (for safety and fashion) and pick up a foam shortsword. As the chest piece beeps with life, I begin the duel with my opponent.

We swing, we thrust, we parry. Our blades lock together and we stare into each other’s eyes, looking for any sign of a next move. The tension breaks when my opponent’s friend tosses a foam shuriken at him, taking down his health. I swing as he does and knock that last bit of health from him.

That was my first introduction to MagneTag. It’s a game based on a wearable sensor system that keeps score whenever it’s hit with magnet-embedded foam weapons. The game’s creation began here in Milwaukee.

The game was invented by Adam Cohen, who spent the last four years on the project. “That’s probably the smartest thing I will do in my entire life, so it’s all downhill from there,” he says.

Cohen took inspiration from when he was a teenager playing paintball in the woods with his friends. He said that there was always a problem where his friends would cheat and they would inevitably argue over who shot whom. And it was impossible to tell because everyone was covered in paint. “I still love playing paintball,” Cohen says. “It’s just not a very reliable scoring system. It’s expensive, it’s painful, and it’s messy so you can’t really play anywhere you want.”

Cohen found the solution to his problems when he was playing around with rare Earth magnets on his desk. He thought that they looked like little BB pellets and imagined shooting them out of a gun. Then, from his background in physics, he remembered that magnets can generate electrical signals. This formed the basis of the sensor system for the game, which use magnetic fields to send information across the system. “And then I just looked around and no one had built it, so I guess the only way I was going to get to play MagneTag was if I built it myself,” he says. Besides, he notes, “ I never quite grew up, I still like to play these things.”

Jason Hilleshiem, my opponent in the duel, is the design and branding expert who makes and cuts the plastic prototypes. He met Cohen when they both worked on the board of directors for Milwaukee Makerspace, a space located in Bay View where artists and creators have access to a variety of materials and equipment. “I knew that he [Hillieshiem] was pretty capable and the kind of person who can get shit done,” Cohen says. He showed Hillieshiem a prototype where he had a coil of sensors on a Porky Pig doll and then shot it with a magnet-tipped dart, making the buzzer go off. Hillieshiem told Cohen to step back and he hit it again. Hillieshiem told Cohen to step back even further and he hit it again. “I was like ‘yeah, this is gold,’” Hillieshiem says.

Hilleshiem also hooked up with Foamation, Inc., the people behind the iconic Wisconsin cheese head, for the foam swords. Cohen said that “the swords are the most fun part. I didn’t even realize that until it was already built and I tried it and I was like ‘wait a minute, this could be way more fun.’” In addition to shortswords and shurikens, they also plan to have more weapons like battle axes. “We can do anything, it doesn’t matter,” says Hilleshiem. 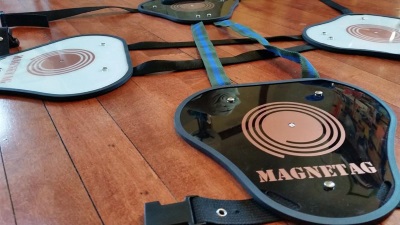 Chris Wilson handles the software and IT of the project and met Adam when they both worked in the Peace Corps in Burkina Faso. His main job right now is to make sure the prototype works and to develop the app.

The app, along with the online component of the game, is one of the biggest priorities for the project. Players can use the app on their smartphones to connect with the sensors on the players and display Mortal Kombat-like health bars for each player that lower with each hit in real time. The app is also devised to be able to connect to other players in the area and help organize events. The team plans to take full advantage of the cameras, data transmission, GPS, and sensors that cell phones have to offer. Says Cohen: “MagneTag I think specifically would benefit immensely from being connected to the internet more than most objects like a coffeepot.”

When asked what kinds of obstacles that they’ve run into during MagneTag’s development, Hilleshiem answers, “Which week do you want to talk about?” Cohen says it’s always an iterative process, and that you always expect it to take fewer iterations than it actually does. “You can’t just release something because it costs so much to produce,” Cohen says,“It’s not like an app or anything. And so everything has to be perfect, all the planning you do.”

Each of the members also have to work part time as well, which can delay the project. “It’s a labor of love,” Hilleshiem notes, but “you still need to make money.”

The group owes much of their success so far to ease of networking in Milwaukee, he adds. “Milwaukee is small where you can actually get stuff done and talk to a bar owner and say ‘Hey, mind if we do this here?’ They’re like, ‘No, you’re going to bring people in? Great! Go ahead.’”

The friendliness and networking potential of the city also applies to its manufacturers, such as Foamation, Inc. “People have to fly out to Wisconsin to get their stuff made,” Cohen says. “We can just drive up to Menomonee Valley or whatever. There’s a ton of manufacturers up there.” Plus, there are also a lot of unused industrial assets around Milwaukee for potential space for equipment and manufacturing.

The most important asset to the team is Milwaukee Makerspace. The MagneTag team has used the space as a base of operations since the very beginning. “I pretty much had to learn how to do basic electrical engineering to gat MagneTag working, and I learned all that here and fast,” Cohen says “People are very willing to help you out and teach you if you have the ambition to learn.”

The MagneTag team is also getting help from a senior design team at the Milwaukee School of Engineering. The team envisioned a full body suit, where you could get points depending on what body part you hit on your opponent (10 points for the legs, 20 for the chest, etc.). The design team at MSE took a rubber kickboxing dummy and created a working prototype for the suit. “It was awesome,” Hilleshiem says. “[It was] all duct-taped together but it worked.”

In terms of their design philosophy, Hilleshiem says, “It’s got to be durable. It’s got to look cool. If I don’t want to use it, no one else would want it. If I feel like a ninja, and it works, I’m okay with it.” Cohen adds that, “We do a lot of testing. A lot of testing. We’ve had to do a lot of redesigns. We’re confident that, when we finally do release a design, people will love it.” 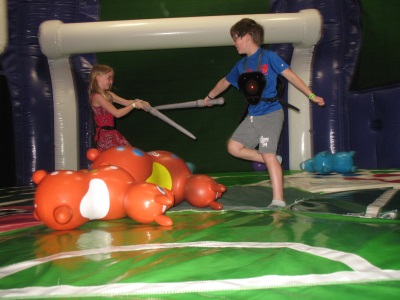 When asked to give advice for young start-ups or people planning on starting up a new company or product, Hilleshiem says, “You’ve got to work hard. You got to know what you want and then go after it.” Says Cohen, “It’s about execution, not about ideas. If you’re not willing to commit to the idea with a lot of your time, don’t do it.” They also suggest you have to ready to terminate a vision early before you waste more time and resources on it. “It’s really frustrating to spend six months working on something really hard and then realizing that you’re just not going to use it,” Cohen says. “Fail smart, fail quick, don’t get tunnel vision.”

Cohen took some inspiration from Hasbro’s line of Nerf products. He has a lot of respect for the company, and would love to work with the company. “But for now, we’re nothing, so they are not going to even pay attention to us,” he says. “But trust me, we believe they will.”

The team has high hopes for the project. “In my mind, I’m working back from the year 2032 and MagneTag is inducted into an Olympic sporting event,” Cohen says. “It’s challenging, but it’s so awesome to see people have fun with it and enjoy something that you made. I mean, the Romans loved it, right? Are we really that different?”

The Kickstarter campaign for MagneTag will hopefully be up in June or July. You can look up regular events for MagneTag by checking out their website and their Facebook Page. It’s the future and it’s fun. 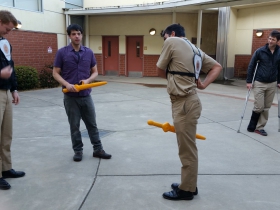 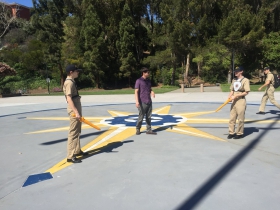 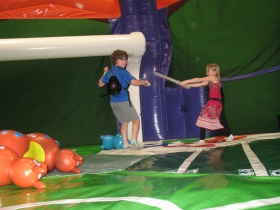 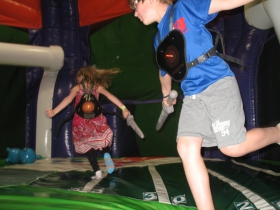 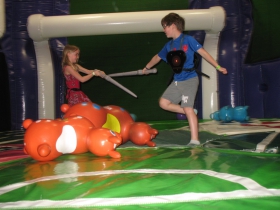 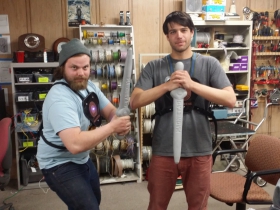