The Brewers manager's $1.2 million colonial is a kid's paradise. Yet so secluded. 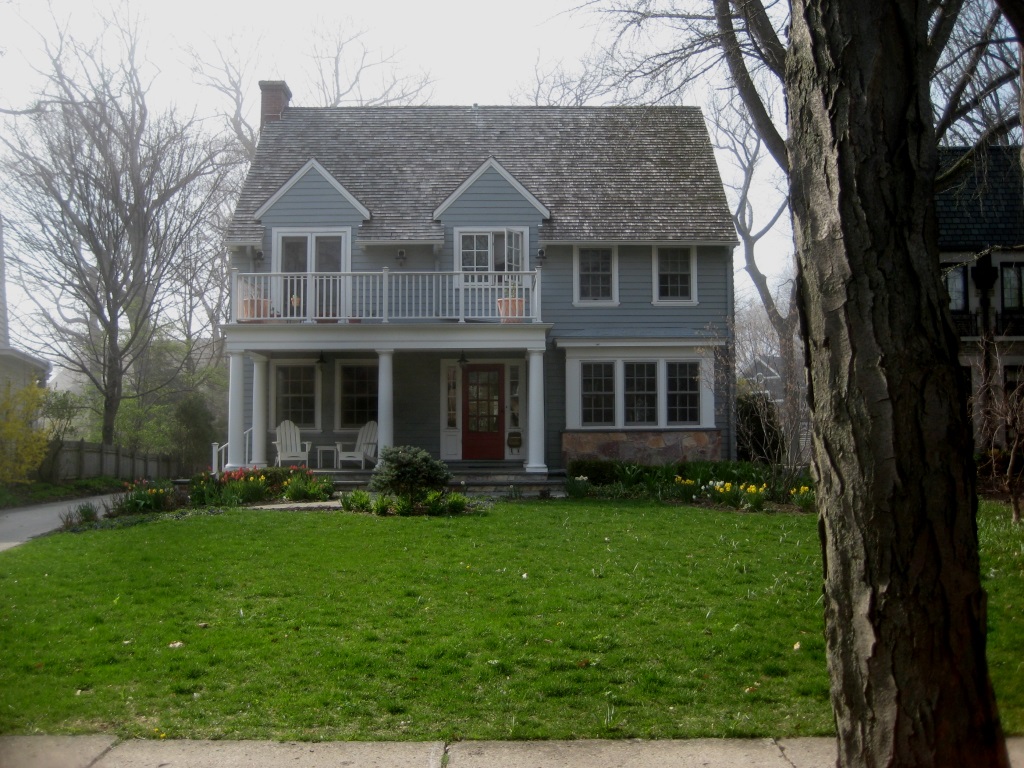 Whenever the Milwaukee Brewers baseball team needs a feel good story — which is perennially — you can count on the Village of Whitefish Bay to knock one out of the park.

Last year, it was House Confidential Honoree Hank the Dog, an adorable ball of fluff. Hank was found on an Arizona baseball diamond, captured the heart of the fans, and moved in with the Wronski family in Whitefish Bay as team mascot.

This year’s gift from this ever-giving North Shore suburb is today’s House Confidential Honoree, midseason replacement Manager Craig Counsell, a hometown hero whose back story is as well known as Hank’s is vague. Counsell grew up here, was a star player at Whitefish Bay High school, and went on to the major leagues, winning two World Series championships along the way. He returned to the Brewers in 2007, settled among friends in his old home town, and after a post-career front office job, was named team manager on May 4th.

His kids go to the same schools he did, they shop at the same Winkie’s Variety store, Sendik’s grocery and Fitzgerald’s Pharmacy as the old man did. They play Little League ball in a Whitefish Bay park, just like dad did. But it wasn’t called “Craig Counsell Park” back then. It is now.

Counsell still hangs out with his old buddies and is well thought of generally. He and his wife support the Fatherhood Initiative, the Urban Ecology Center, the Boys and Girls Club and the MACC fund, among other charities.

Counsell’s home base in Whitefish Bay is on one of the metro area’s first culs-de-sac, an elongated oval called E. Circle Road. The secluded street is accessible only from two points on N. Lake Drive, and is easy to miss. There are no interior intersections to this little enclave developed in 1921 on land that had been part of the Pabst Whitefish Bay Resort that closed a century ago.

The Pabst Brewing Company did not mess around when it came to its pre-Prohibition era beer gardens. The resort was lushly gardened and attractively wooded with specimen oaks and maples, many of which are still standing.

These tower above the homes of this prosperous neighborhood, giving the landscape its mature look. Craig and Michelle Counsell purchased this 1923 home two days after Christmas in 2006, paying $1,175,000 for it at what was probably the height of the market. The couple, who now have four pre-teen children, bought this home on its 79′ x 330′ diamond-shaped lot from Foley and Lardner attorney and prominent real estate expert Michael Hatch, and his wife Lisa Hatch, a milliner. 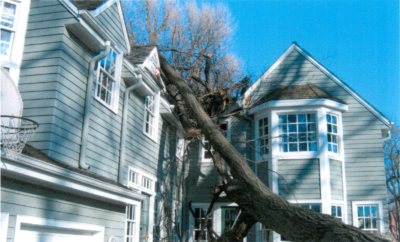 In 2006 an oak tree decided to not stand any more and crashed through the roof of the home, literally shaking it to its foundations. Photo courtesy of the Village of Whitefish Bay.

To say the Hatches had some recent remodeling work done on the old place during that year would be an understatement. Earlier in 2006 one of those ancient oaks decided to not stand any more and crashed through the roof of the home, literally shaking it to its foundations. Village records include photographs of the tree’s damage to the interior, including a perceptible shifting of the concrete block basement walls. Well, that cost $48,000 to take care of.

The Hatches had maintained a steady stream of improvements to the place during their tenure, including a 1990 addition to the 1945 addition to the 1923 home. They selected David V. Uihlein as their architect, which tells you something. The addition and the professional relationship endure. Hatch sat with Uihlein at the recent Historic Tax Credit event at the Mackie Building.

The Counsells had some remodeling and expansion ideas of their own. As soon as they moved in, plans were drawn to renovate the front porch.

We have seen in the past that things can get dangerous when professional athletes start upscaling their cribs, but our Hometown Hero came through admirably.

That $140,000 job included re-dormering two upper floor windows which had been recessed into the roof, and somewhat awkwardly at that. Now the dormers stand out, proud and substantial, and cap a most attractively restrained outdoor porch of 160 square feet. The porch has an accessible deck above that you can get to via a sliding glass door in one of the dormers. The red front door has traditional side lights, and two Adirondack chairs on the porch bespeak leisure and comfort, which may be a rare commodity for Michelle with four active kids and a traveling husband on a busy schedule.

Due to the diamond-shaped lot, it is difficult to comprehend from the street how big this house actually is, after all of the additions and dormer renovations. You can get a slight sense of it from next door, at the Whitefish Bay Public Library, just a moonshot over the left field fence.

When you join the Knothole Gang who probably can’t help sneaking a peak at the local celeb’s home, you can see that it is, indeed, quite deep and large. According to the ever-dry statistics of the assessor, the home has a total of 4,475 square feet finished living area, a 773 square foot garage, and a nice big deck in the back yard. There are 12 rooms in the home, including five bedrooms, three full baths and one half-bath. There is a 550 square foot rec room in the basement. The house has a trampoline, batting cage and ping pong. This is a kid’s paradise!

Adding to ambiance, last summer, the Counsell family was one of 25 in the region to host a college player for the Lakeshore Chinooks for the season. Outfielder Harrison Bader, it turned out, was a huge fan of Roger Maris and Mickey Mantle (sorry, Craig), but he was aware of his host’s baseball accomplishments, and loved all the benefits of staying here. As Michelle noted to the Milwaukee Journal Sentinel, “I’m already cooking and cleaning, I figure one more kid won’t be a big deal.”

The home’s lawn is nicely tended. A number of years ago the guys on the Brewers team presented Counsell with a riding lawn mower, personalized with their autographs. For small lots like those of Whitefish Bay, mowing the grass with a tractor is about as practical as using a scythe, but Craig has been known to employ the machine, and even cut the neighbors’ lawns on occasion. Maybe he can ride it in the 4th of July parade in Whitefish Bay this summer. I want to see this thing.

On a recent visit, the tulips in the yard competed with the forsythias to dominate the attention of pollinators and human observers. No surprise that this is an attractive garden — the Google streetview image of the home, taken in 2011, shows somebody in the yard watering the plants on a summer day.

Is it Craig? Oh, Michelle, you’ve got yourself a winner!  Now, if your husband could just get himself a winning season, this baseball feel-good story will wind up in the Hall of Fame. 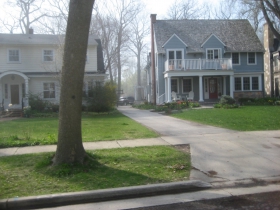 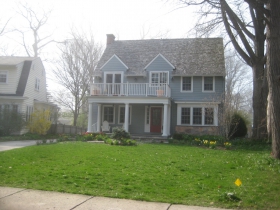 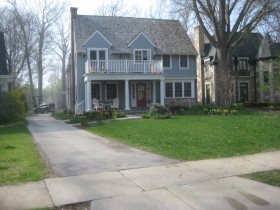 The House Prior to Renovation 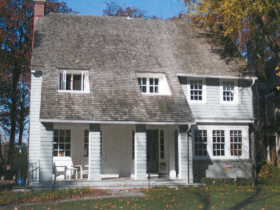 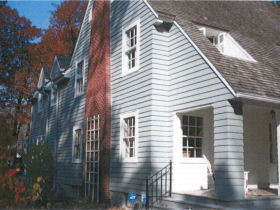 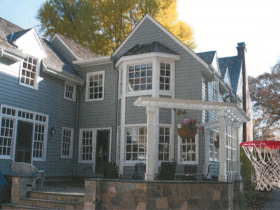 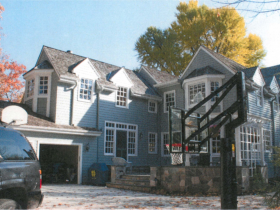 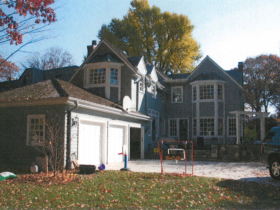 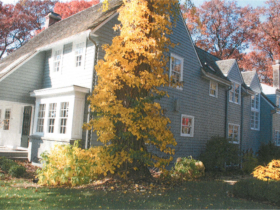 Tree Damage to the Home 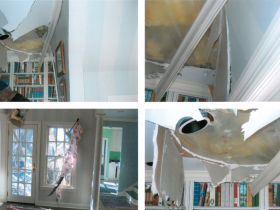 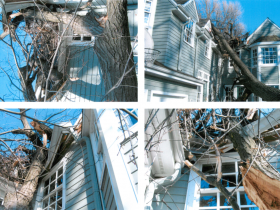 How Milwaukee Is It? The residence is 6 miles from Milwaukee’s City Hall, and just behind the Whitefish Bay Village Hall, Police Department, Public Library and Fire Department. Hometown all the way! The Craig Counsell Park is about 2 miles to the northwest, considerably shorter if you hop the fence in the backyard.