12-fold increase in recipients suspended under Walker. Critics assail it as politically motivated.

By Bill Lueders, Wisconsin Center for Investigative Journalism - May 4th, 2015 10:56 am
Get a daily rundown of the top stories on Urban Milwaukee 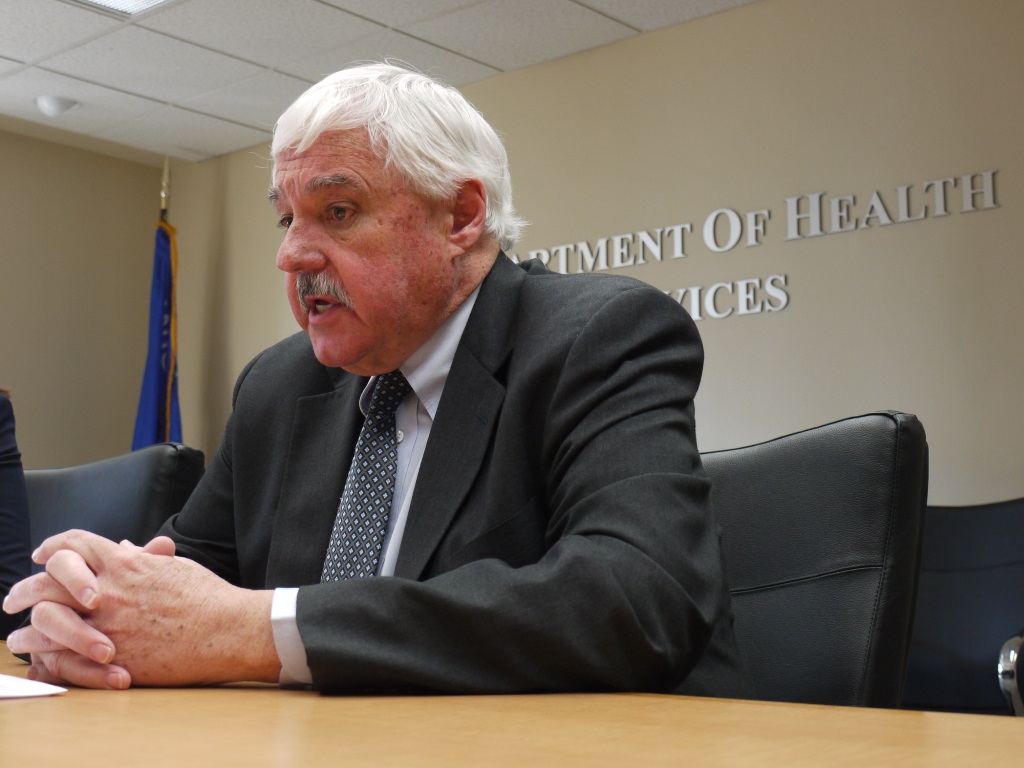 Alan White, inspector general of the Wisconsin Department of Health Services, is proud of his office’s record fighting fraud: “Our responsibility is to the taxpayers. Those are our stakeholders.” Photo by Kate Golden of the Wisconsin Center for Investigative Journalism.

Under Republican Gov. Scott Walker, the state of Wisconsin has seen a nearly 12-fold increase in the number of persons suspended annually from the state’s food stamp program for fraud.

The suspensions for “intentionally violating program rules” are part of a larger get-tough approach to people receiving federally funded nutrition assistance, called FoodShare in Wisconsin. Walker has also introduced new work rules for some FoodShare recipients, and proposes to seek a federal waiver to begin requiring all adult participants of the program to undergo drug testing.

Walker’s administration has long devoted energy and resources to cracking down on recipients of the supplemental food program. The efforts include a new office to fight fraud within the state Department of Health Services, which runs FoodShare, additional systems for citizens to report allegations of abuse, and new strategies to nab would-be freeloaders through stricter screening and income-verification rules.

In 2011, Walker’s first year as governor, 102 people were suspended from the FoodShare program for violating program rules, according to DHS. That number has increased each year, to 1,184 in 2014.

White thinks Wisconsin’s efforts to step up enforcement serves as deterrent to potential cheaters: “They see that we are serious about preventing and detecting fraud.” He notes that federal law requires the state to take action in cases where it believes fraud has occurred.

But advocates for FoodShare recipients say the state is being overly aggressive, punishing needy people who make innocent mistakes.

“There’s a lot of judgment going on by white, middle-class people and a lot of assumptions and disqualifications based on these assumptions,” said Pat DeLessio, an attorney with the Milwaukee office of Legal Action of Wisconsin, a federally funded nonprofit agency. The agency has successfully helped clients fight state efforts to suspend their FoodShare benefits. But in most cases, she said, “people are coming to us too late.”

Sherrie Tussler, executive director of Milwaukee’s Hunger Task Force, a nonprofit community group, blasts the state’s crackdown. “It’s silly, it’s stupid, and it’s a way of manipulating public opinion,” she said. “Everybody needs a scapegoat and it seems like the poor are the scapegoat in Wisconsin.” 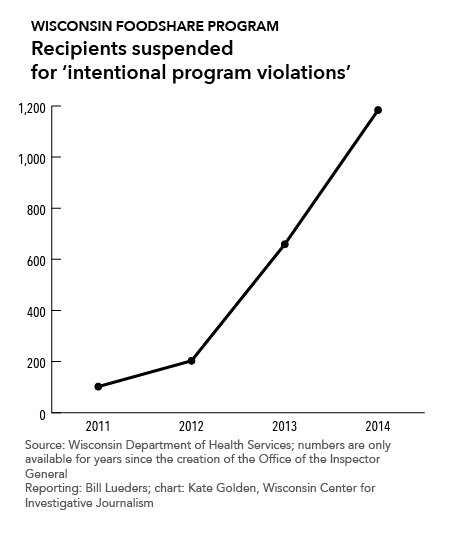 A ‘misuse’ of resources

FoodShare is Wisconsin’s incarnation of the federal Supplemental Nutrition Assistance Program (SNAP), run by the U.S. Department of Agriculture.

Under Walker, the number of FoodShare program fraud investigations has grown dramatically, from 2,098 in federal fiscal year 2010 to 6,403 in fiscal year 2014, which ended last September. These efforts have been aided by DHS’ new Office of the Inspector General and the establishment of a hotline and web portal for citizens to report suspected public assistance program fraud.

The office currently has 107 employees and an annual budget of $12.6 million. Thirty-one employees work on fraud investigation, including eight on recipient fraud. It said its fraud-fighting efforts in Medicaid, FoodShare and the Women, Infants and Children programs cost $1.3 million in the most recent state fiscal year, and generated $22.5 million in program savings, including “stopping future benefits from being fraudulently received.”

Tussler, of Hunger Task Force, calls this intense focus on ferreting out a relatively small amount of fraud “a misuse of state resources.” She said the state’s disqualifications of needy people is putting additional pressure on local food pantries. 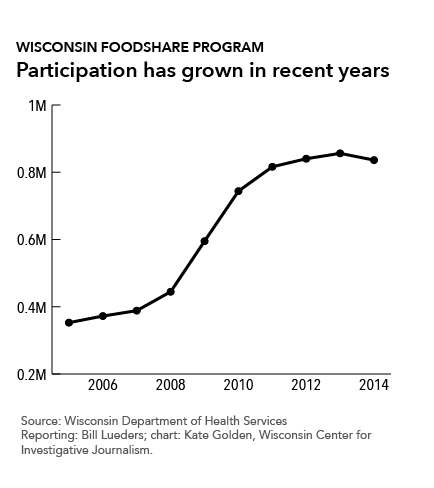 How much fraud is there?

About two-thirds of last year’s FoodShare recipients were in families with children. The average monthly benefit was $112 per person and $224 per household. The total cost of the program was $1.1 billion in 2014. All of this money came from the federal government.

Nationally, the error rates for SNAP overpayments (including fraud) fell for the seventh straight year to a low of 2.6 percent in 2013, USDA numbers show. That’s the lowest error rate since the USDA began its current system of measuring in 1981.

“Our error rate is low, which is great,” said White of DHS. “We want to keep it low.” His office’s mission is “to protect state and federal money,” he said. “Our responsibility is to the taxpayers. Those are our stakeholders.”

DHS statistics show that fraud accounts for a small share of FoodShare program overpayments. During the past three fiscal years, from 2012 through 2014, 10 percent of the total $13.2 million in overpayments collected by the state were attributed to client fraud. A larger share of this amount, 14 percent, was blamed on agency error. And the vast majority (76 percent) was chalked up to “inadvertent” errors by recipients.

While the state’s incidence of FoodShare fraud may be slight, it remains a major talking point among conservative politicians.

U.S. Rep. Glenn Grothman, R-Wisconsin, recently urged an audience in Oshkosh to keep an eye on people they see using FoodShare at the grocery store, saying “some people are arranging their life to be on FoodShare,” according to the Oshkosh Northwestern. 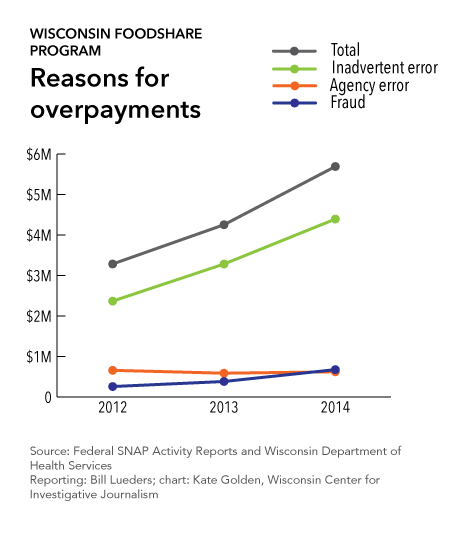 And Gov. Walker, a likely presidential contender, drew what the Wisconsin State Journal called “some of his biggest applause” at an Iowa summit when he talked about requiring food stamp beneficiaries to be drug-free and seeking employment.

Beginning April 1, all able-bodied adult FoodShare recipients without dependents must work or participate in job training, or both, for at least 80 hours a month, or meet an exemption, to keep getting benefits. It has been estimated that half of the 62,000 recipients in this category could lose benefits.

Walker has also proposed, in his 2015-17 budget, to seek a federal waiver to allow the state to require that FoodShare recipients be tested for drug use, and receive treatment if they test positive. Republicans on the Legislature’s Joint Finance Committee, on a 12-4 party line vote, added a provision to make recipients who report FoodShare cards lost or stolen, as happens about 130,000 times a year, absorb the roughly $3.50 replacement cost.

And lawmakers plan to introduce a bill to seek a federal waiver to require FoodShare recipients to use benefit cards that include their photos. The measure would cost an estimated $2 million a year.