A recent story about his upbringing may shine a sad -- and revealing -- light on Walker’s personality and political views. 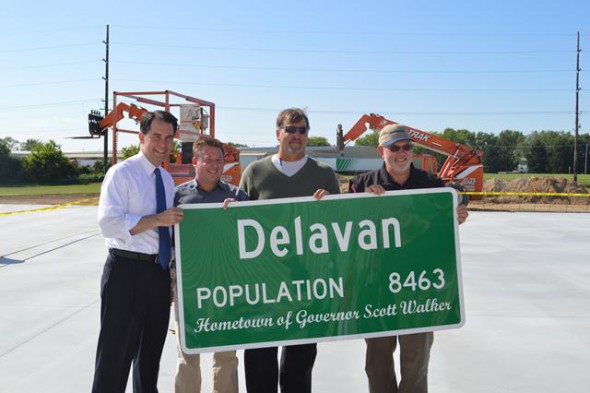 Scott Walker remains something of an enigma. Beyond the story of the Eagle Scout son of a Baptist preacher whose faith guides him, we’ve never gotten much of a glimmer of what drives him. It requires huge amounts of energy and long, exhausting days to attempt what Walker is doing — to run for president and campaign across the nation and make international political trips while still serving as governor — and that isn’t possible unless something very powerful is pushing you. But Walker always projects an icily calm persona, never revealing the least glimpse of any inner demons.

A recent story by the New York Times, however, may have found a window into Walker’s personality. The subject at hand was the influence of his faith. Two days before the Times story, the Milwaukee Journal Sentinel did a story on the same topic, but it wasn’t nearly as good. Walker didn’t do an interview with the JS, but did cooperate with the Times, which of course has far more impact nationally.

The Times found that Walker’s father wasn’t that political in how he conducted himself, and had religious views more nuanced than those of the current Wisconsin governor. “Walker’s father, the Rev. Llewellyn Scott Walker, was a minister in the American Baptist Churches USA, a more pluralistic denomination than the conservative and better-known Southern Baptist Convention… Pastor Llew, as he was known, is a Republican, but politics and the social causes of the day did not animate his First Baptist Church in Delavan, Wis., where Mr. Walker lived from age 10 until he left for college…Before the elder Mr. Walker retired in 1995, at the age of 56, he struggled with depression…His wife, Pat, and the teenage Scott Walker shouldered some of his pastoral duties. ‘There were Sundays when Scott would preach the sermon,’” the church’s current pastor, Rev. Michael Ida, told the Times.

Bill Clinton’s father was alcoholic and abusive. Wisconsin Congressman Paul Ryan’s father died when he was young, which helped turn him into a “man in a hurry,” as a recent story in Slate noted. The list of politicians driven by the absence or deficiencies of their father is long, the story notes.

Up to now, the story of young Scott sometimes delivering the sermon for his father simply suggested a remarkably smart and mature young teen. But the addition of a depressive father who has trouble doing his job (and according the Journal Sentinel story, had to retire as pastor at age 55 because of depression) gives the story a darker hue.

Back in the 1980s, mental illness was something to be ashamed of, something a family was likely to keep secret. Walker has never discussed it and he may well feel protective of his father. But it could hardly have been hid from parishioners at his father’s church, which might have been very embarrassing for Scott and his younger brother. Does that help explain Walker’s drive? As Slate notes, research suggests “an outsized percentage of prominent politicians have absent or dysfunctional fathers.”

Compared to his father, Walker is far more driven, more functional, and it would appear, more hard-edged in his political views.

In Wauwatosa, Walker and his wife, Tonette, joined another American Baptist congregation, Underwood Memorial Baptist Church in the early 1990s. The Times reported that Walker’s parents, “in retirement had moved to be near their son and joined Underwood.” But “a dozen years later, in 2005, Underwood voted to affiliate with the Association of Welcoming and Affirming Baptists, a gay-accepting national group, and a small rainbow flag was affixed to its signboard,” the Times reports. “The hiring of a woman as pastor in 2003 had accelerated its progressive tilt…”

“Some members believed he had cut ties because of Underwood’s liberal drift,” the Times story continues. “‘As soon as we put the flag on the sign, he was out of there,’ said Kevin Genich, a former church member who knew Mr. Walker.”

Walker told the Times his move to another church was unrelated to this, but was because there were few children the ages of his sons there. “Ultimately, we wanted to go to a place where our kids would have the ability to interact with other kids,” he said.

But Tonette offered a different story, according to Marilyn Carrington, a longtime church member who told the Times that “Tonette said they were looking for a more family-friendly place.”

The emphasis on accepting gays at Underwood came at a very inconvenient time for Walker. As a legislator, Walker had voted for a provision (which didn’t pass) to ban gay marriage and as a potential candidate in the Republican gubernatorial primary in 2006, he still held this view. And this was during a two-year period, when the state Assembly and Senate, in 2004 and 2005, voted twice to approve a constitutional amendment to ban same sex marriage which was then approved by the voters in the 2006 election. One way to avoid any conflict for Walker at church, where he and his family were regular attendees, would be to switch their place of worship.

But Walker’s parents had no objections to Underwood, the Times reports. “They continue to worship there.”

So Scott Walker and his family left Underwood, turned their back on his Baptist upbringing and become members of Meadowbrook Church, a non-denominational church which is “politically and theologically conservative,” preaches that “the Bible is the word of God, ‘without error,’ and that Christ’s return is ‘imminent.’ It is led by a council of elders that is open only to men,” the Times reports.

Meadowbrook is one of 13 “daughter churches” in the Milwaukee area that sprang from the huge and phenomenally successful Elmbrook megachurch in Brookfield, Wisconsin. (Eight of them, once dubbed “baby brooks,” use “brook” in their names.) Elmbrook is Protestant, but not affiliated with any organized religion and was a small outpost started in the late 1950s that was built into a giant by an Englishman named D. Stuart Briscoe, who came to Wisconsin in 1970 and had no formal religious training.

Elmbrook and its daughter churches mostly serve well-to-do suburban areas and generate a huge amount of donations from parishioners. (There are now three daughter churches in Milwaukee, including one Hmong and one Lao parish.)  A 1994 Milwaukee Magazine story estimated the average Elmbrook parishioner donated $2,000 per year to the church, and Wikipedia reports that its average attendance is 7,000, which could mean annual revenue as high as $14 million.

A 1999 feature story by the now defunct alternative weekly Metro Milwaukee Weekly (edited by yours truly) reported that Elmbrook representatives said its annual budget was then $8.5 million. Reporter Tanya Northrup’s request for more detailed financial information was “met with tight-lipped defensive refusals.” Today, Elmbrook’s website offers a financial information page that shows a “home budget” of $4.3 million, half the level of 1999 despite considerable growth by the church since then. And Elmbrook has never revealed the salaries its leaders make.

“The church raises money for missions in Zambia and Tajikistan, but seems less concerned about the worldly comfort of those much closer by,” Northrup wrote. “Many of the latter could be found in Milwaukee.” According to Wikipedia, Elmbrook does work with groups like Friends for Health and World Relief-Haiti, but most of its activities seems focused not on providing food relief or worldly comfort of any kind, but on winning new converts, both locally and internationally.

The dark moments of Walker’s childhood might have pushed him to be a bleeding heart for those less fortunate. But people with such a background can also go in the opposite direction. Slate quotes the psychiatrist and writer Justin A. Frank, who argues that Ryan handled his father’s death through a form of denial: “Somehow you degrade unconsciously the part of you that needs help, and then you project that onto other people and say they don’t need help.”

In Gov. Walker’s case, he has reduced both the earned income tax credit and the Homestead Tax Credit for low-income people and is now cutting food stamps for able-bodied adults if they are without jobs for a total of 90 days within three years. Walker, after all, has succeeded despite the issues his family faced. (And when he didn’t succeed, suffering a devastating loss for student government at Marquette, he didn’t finish college and has never returned to the scene of that defeat to finish his degree.)

Both his hard-edged conservative views, and his incredible drive to succeed in elections, may go back to a son who faced sadness and embarrassment due to his father’s problems. Walker’s story is about far more than an Eagle Scout who wanted to soar.