MIAD Students Could Be Future Stars 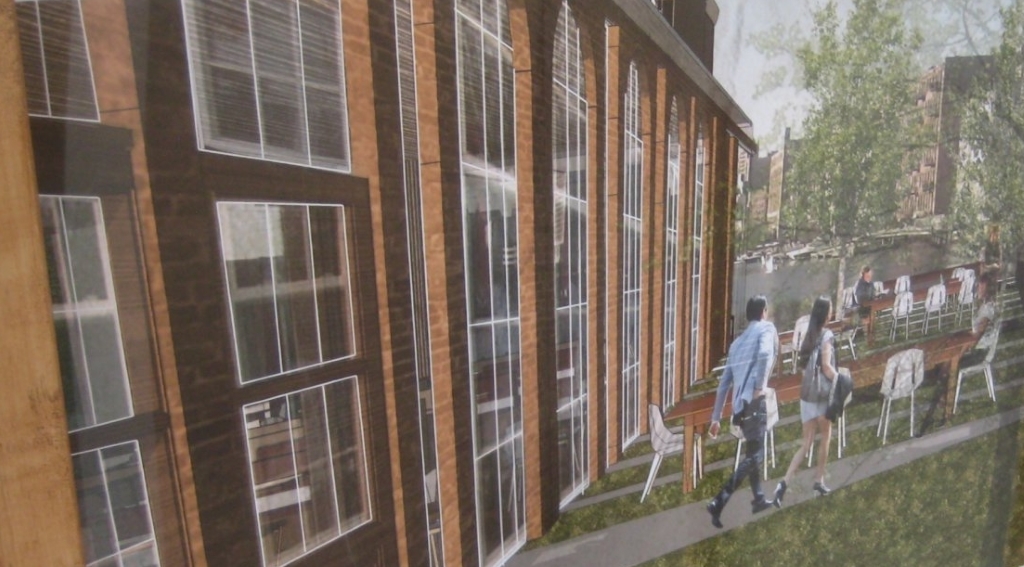 The Spring Gallery Night took place Friday, April 17th, bringing thousands Downtown and to the Third Ward for a glimpse of the cultural life of Milwaukee. It was the final Gallery Night for DeLind Fine Arts, which is shutting down after a half-century in business at a total of nine different locations, including its final home in the George Watts & Son building downtown. Bill DeLind and his associate Michael Goforth will keep their hands in the art game doing private sales, just without all of the inventory and overhead of running a retail location. Pam Brown, the personable and efficient gallery assistant will be looking for a place to work where she can use her skills, she said, but is also tempted to take just a little time off to enjoy with her family.

The day also saw the opening reception for the 2015 Senior Exhibition at the Milwaukee Institute of Art and Design, a four-year school located in the Third Ward. There were 139 presentations from the school’s graduating seniors, all of whom spent the last year working on their projects, on display at this exhibition. Things have changed over the years here, and students are expected to provide work that shows an immediate commercial application, or solve a particular design problem. Although the school still graduates a number of students in the fine arts of painting, printmaking and sculpture, the great majority of works in the show were from majors in Illustration, Industrial Design, Communication Design, and Interior Architecture and Design.

Emily Bury, a Design major, exhibited a display on Vermiculture, including two well-designed pamphlets explaining the whys and wherefores of employing worms to consume one’s kitchen wastes. I’ve harbored Eisenia Foetida in my pantry for years, and have reveled in the quality of the compost produced. If a pet is an animal you raise without the intention of eating it, then these worms are my pets. Ms. Bury’s work should do a great deal to popularize this fascinating process.

Zeke Johnson, an Industrial Design major, displayed a product called “Via,” and it is a useful one that could sell in the millions of units. Johnson noted that his grandmother had a hard time fastening her seat belt due to arthritis and the infirmity of age. Why, even the most fit and nimble among us have faced similar difficulties. Johnson performed a number of motion studies and produced a number of prototypes of a seatbelt that is actually easy to fasten, in part because of its shape, and due to the use of a magnet to help align the parts. He won a scholarship for his work.

Alexander Pavelich, an Industrial Design major,  displayed his prosthetic device on a one-legged mannequin. It is designed for physically active amputees, of whom many are soldiers returning with war injuries.

Bree Ringe, an Interior Architecture and Design major, displayed a model and renderings for Long River View, a project underway to rehabilitate a riverfront building on W. Seeboth St., while Adam R. Gerhard, also with the same major, showed off an excellent plan to re-do the shedlike Milwaukee Yacht Club.

Eric Vogel, a House Confidential honoree, and Chair of 3-D Design at MIAD, made his way through the exhibition accompanied by a videographer. Vogel says that MIAD is embracing new relationships with other academic institutions in Milwaukee, including Marquette and UW-Milwaukee, and will soon announce future initiatives. He says that interdisciplinary work is now a requirement at MIAD, figuring it leads to a broader education and graduates who are better able to adapt to the rapidly changing workplace. The exhibition remains open until May 9th. All classes will be canceled Wednesday, April 22nd, for a school-wide, day-long critique of the Senior Thesis projects.

As usual, the Marshall Building was filled with Gallery Nighters. The Timothy Cobb gallery cleared out the old stuff that had been on display, and showed a new, spare look with contemporary items. About the oldest thing in the show, it seems, was an absolutely mint and original men’s Schwinn bicycle from the 1960’s. Next door, Elaine Erickson showed what will be the final exhibition of work by Kenn Kwint, a local abstract expressionist who was in attendance at the show. The body of Kwint’s remaining work will be going to the Kohler Foundation.

The Marshall Building’s notoriously slow elevators eventually arrived, transporting Reggie Baylor to his Plaid Tuba studios upstairs, where things are always busy. Melissa Dorn Richards displayed her colorful abstractions, and her studies of birch twigs. Baylor is doing some colorful abstractions, himself, but is also pondering his “largest and most complex work.” It is a black-and-white composition of a poolside retreat.

A backyard commission of a wealthy patron, perhaps?

“No,” says Baylor. “It’s a patio in a Holiday Inn in California that I stayed in once.” 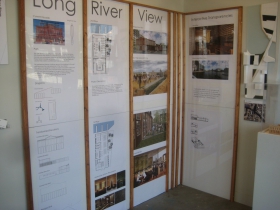 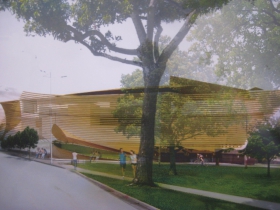 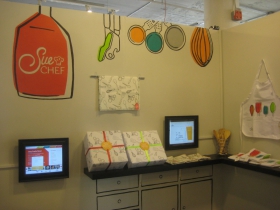 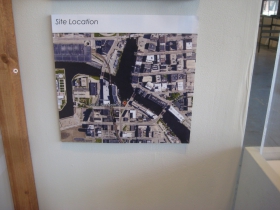 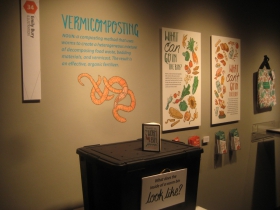 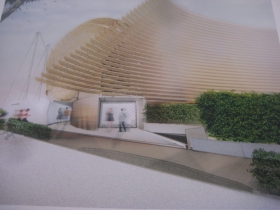 4 thoughts on “Plenty of Horne: MIAD Students Could Be Future Stars”