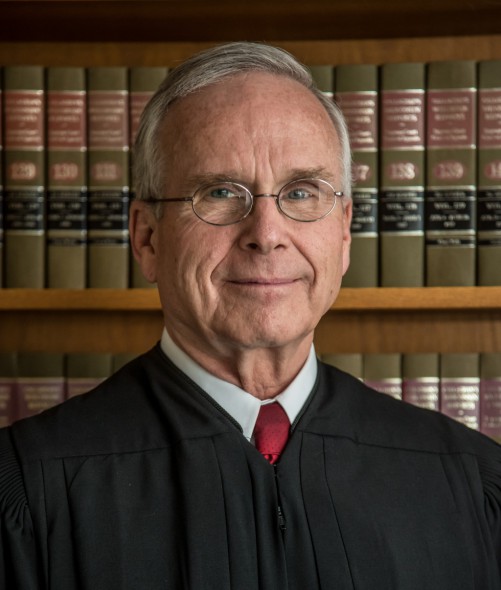 There is a fascinating subplot to the race for Supreme Court between challenger James Daley and incumbent Justice Ann Walsh Bradley. And that is that Daley supported the John Doe investigation of alleged illegal campaign coordination between Gov. Scott Walker and third party advocacy groups like Wisconsin Manufacturers and Commerce and the Wisconsin Club for Growth.

Keep in mind that Daley is running as a conservative, has blasted Bradley as a liberal, and is the Republican Party candidate in all but name: he accepted a $7,000 donation in-kind help from the party, has appeared at GOP events and used the party to circulate his petitions. Daley was first appointed to the circuit court bench by Republican Gov. Tommy Thompson. Yet he is involved in the investigation that has been condemned by many Republicans, and is a key reason they want to overhaul the Government Accountability Board, which supported the Doe investigation.

The heart of the investigation is what had always been the law: that any coordination between a candidate’s campaign and independent third party groups is illegal. And in his recent debate with Bradley, Daley affirmed “several times” that this is the law, as Wispolitics.com reported.

“It’s illegal for candidates to coordinate in any way with those groups,” Daley said. “The law is clear, you cannot do it.” In which case an investigation of such illegal activity would be warranted.

Daley also said he is actually a defendant in the Doe suit due to his role as chief judge for the 5th Circuit, which includes Dane, Rock, Green and Lafayette counties.

This adds another Republican-leaning official to many others involved in the John Doe investigation. That includes special prosecutor Francis Schmitz, who was one of Republican President George W. Bush’s three recommended candidates to become the U.S. Attorney for Milwaukee and who has disclosed that he voted for Walker in the recall election and was once a member of the Republican Party.

Indeed, the number of people involved or asked to be involved by Schmitz and/or Milwaukee County’s Democratic DA John Chisholm, who first initiated the investigation, is quite wide-ranging. For instance, they asked Republican Attorney General J.B.Van Hollen to head up the investigation. Did he turn down the offer, suggesting it was legally suspect? On the contrary, he considered the request for nearly five months, then turned it down, citing a possible conflict of interest, given that “a campaign financing investigation… could foreseeably involve individuals with whom I have relationships.”

Van Hollen suggested Chisholm and company consider working with the state Government Accountability Board, which “as a non-partisan entity…may inspire more public confidence than an investigation led by partisan officials.”

So the Doe investigation team did just that, asking for the GAB to get involved, and it agreed to do so. Which added other Republicans to the team. The members of the board, all former judges, at that time included three holdovers from the Doyle era: Thomas Barland, a former GOP legislator who was appointed a judge by Republican Gov. Warren Knowles; Thomas Cane, appointed to judgeships by both Democratic Gov. Pat Lucey and Republican Gov. Lee Dreyfus; and Michael Brennan, first appointed to the bench by Lucey.  Three others, all appointed by Walker, included David Dieinger, first appointed to the bench by Gov. Thompson; Gerald C. Nichol, who served two terms as a Republican District Attorney in Dane County; and retired judge Timothy Vocke, who once served as a Democratic DA in Vilas County.

So a board which included three appointees of Walker and three holdovers, two of whom had gotten judgeship appointments from Republican governors, approved joining the John Doe investigation against Walker. It seems likely that Walker’s appointee Deininger favored the investigation, because Walker later decided not to reappoint him.

It should be noted that Eric O’Keefe, the litigious head of the Wisconsin Club for Growth, whose group is also being investigated in the John Doe, has sued the GAB and its executive director, Kevin Kennedy, arguing that Kennedy had somehow continued the Doe investigation after board authorization was given. But there are several problems with that charge. First, it concedes that the board originally okayed the investigation. Second, it suggests that Kennedy was trying to do an end-run around his board. Kennedy is the consummate Capitol insider, who has worked for the GAB and its forerunner state elections board, since 1979. The elections board was always equally divided between Democrats and Republicans while the GAB has leaned Republican from the beginning, and Kennedy has survived all these years by keeping his board members happy. Finally, the GAB has hired lawyers who are vigorously contesting O’Keefe’s claim.

All of which leaves us with a long list of Republicans who thought the Doe investigation had enough merit to support it. In the debate with Bradley, Daley tried to distance himself from it, saying his only role was administrative in assigning the case to a judge and had no role in approving the probe. But assigning a judge means paying for the judge’s time, which can be quite costly. If Daley thought the Doe was unjustified legally, he wouldn’t have assigned the judge.

The reality is that the law, as interpreted by the U.S. Supreme Court, has long held that coordination between campaigns and independent groups is not allowed, as Urban Milwaukee contributor Bruce Thompson has explained. In that sense, there was nothing controversial about the Doe probe, it was investigating alleged activities that, as Daley has noted, would clearly be illegal. Moreover, it was initiated as an outgrowth of John Doe I, which resulted in the conviction of six people, including three of Walker’s staff members at Milwaukee County.

O’Keefe has had some success challenging the investigation’s legality, notably with Judge Rudolph Randa, but his decision certainly appears at odds with U.S. Supreme Court opinions (and Randa has been repeatedly overturned by the U.S. Court of Appeals). And Randa’s ruling is in any event a new way of looking at the law in Wisconsin. Up until O’Keefe’s recent legal challenges, the consensus in Wisconsin was that coordination was not allowed, which is why so many Republicans enlisted to help didn’t oppose the Doe.

O’Keefe has also argued the manner in which the John Doe has been conducted has been outrageously aggressive. Perhaps, but the exact details are still largely a secret and O’Keefe’s claims would be disputed by Chisholm and company if that issue went to court. And this still doesn’t address the large cast of Republicans who supported the probe.

The reality is the dispute over the Doe isn’t so much between Democrats and Republicans as it is between older GOP members and the more radical new Republicans of the Robin Vos-Scott Walker era, who control the entire state and see no reason to compromise on any issue.

Finally, there is the curious role of the Milwaukee Journal Sentinel in this controversy. Reporter Jason Stein covered the Daley-Bradley debate and didn’t write one word about the revelations from Daley, skipping an obvious scoop.  The debate, moreover was preceded by a story in Isthmus by longtime JS reporter, Marie Rohde, which quotes Daley about his involvement in the Doe probe, which her former newspaper also didn’t follow up on.

Yet Wispolitics.com did cover what Daley had to say. This is an online publication whose chief investor was a Republican and which makes its money by seeking subscribers among lobbyists, legislators and politicos in both parties. Its economic model depends on covering things in as bipartisan a manner as possible. The Journal Sentinel, by contrast, mainly serves a four county area, three of which are heavily Republican: Waukesha, Ozaukee and Washington counties. Has the paper decided its readers might stop subscribing if they hear too much about the Doe? Your guess is as good as mine.

Update 11:15 a.m. April 3: I’ve now heard from a source close to the Daley campaign that, as chief judge for the state’s 5th Circuit, Daley was asked to appoint Dane County Judge Juan Colas to the Doe team, and did so. Colas does appear in this legal document related to the Doe.

11 thoughts on “Murphy’s Law: John Doe Supported by Many Republicans”