UWM professor is a Native American who brings a unique perspective to his art.

Bernard Perley is a professor of anthropology at UW-Milwaukee with a degree from Harvard. But he is also an artist who has been creating art since he was a child. His mother could tell stories about how much he loved art as a young boy, about his favorite blue truck and how he would make illustrations of it in his sketchbook. She supported his art whole heartedly, making sure he always had a sketchbook and saving all his drawings.

Perley was born in New Brunswick, Canada, at Tobique First Nation, a native reservation of the Maliseet, an Algonquian-speaking band of Indians. But he began attending elementary school in Maine. As he grew up he pursued his passion for art, but also was drawn to other issues.

At the University of Texas, he received a bachelors in fine arts and then a masters in architecture. He worked as an architect intern in Washington D.C., but during his time off he would visit the Library of Congress to gather information on Maliseet language, culture, and history. He began to think he wanted to pursue something different than art or architecture. “I was thinking philosophy. I was thinking Columbia.” Perley says.

A friend of his had moved to Boston and asked him to come up for Thanksgiving. While there he decided he was so close to Harvard he should check it out. He talked to the director of the Native American Program, where he was told “We would love to have you here.” Bernard eventually decided to apply to the Harvard’s Graduate School of Arts and Sciences to study Anthropology and Harvard accepted him. But they wanted to make sure he accepted Harvard and invited him to a campus tour. And that really sold him. “You can talk about all the benefits of going to Harvard, the resources, the money,  the faculty, all that, but I also point to the intangibles. Those intangibles really made the difference for me.”

During Perley’s time getting his PhD at Harvard he was able to invite Native American writers and artists to come and present their work through various events. That kind of engagement at the university level was extremely important for him.

In 2002, Perley joined the faculty of UW-Milwaukee, where he has taught such courses as Linguistic Anthropology and American Indian Societies and Cultures. He has published numerous articles on anthropology, including a number that dealt with Maliseet culture.

But Perley continued to create art. “That is something I can’t help but do,” he says. His work naturally became influenced by his anthropological training. “I noticed that Native Americans occupy a particular space in the social imagination that on the one hand celebrates native culture, but on the other hand hides the brutal history of native peoples.” He’s very interested in the way Native American culture is advertised, like American Spirit cigarettes, and pays close attention to such pop cultural representations.

Last semester he was co-curator of a show at the Union Art Gallery, called “Visualizing Sovereignty,” and he created an installation piece called “Coyote’s 1st World Casino.” The exhibit was shown during the month of November. An  important goal of the show was to educate people that November is National Native American Month, Perley notes. The work he contributed sought to examine the tensions between pop culture and the Native American experience.

Perley doesn’t buy the idea of everyone working together to create a unified culture. He’s more interested in celebrating the diversity of human cultures. He hopes that art and dialogue on these issues can help people see beyond a reflexive antagonism towards cultures other than our own. “It’s our diversity that is going to make us strong. It is not going to be what pulls us apart.”

What the Union Art Gallery show is about, he says, “is putting all the pieces back together. It’s about the language. It’s about the stories. It’s about prayer.” In his work, you see the fragmentation, the gradual disassembling of native sovereignty over a period of centuries. But it also brings the story up to the present, with Indian-run casinos. The message, he says, “is kind of evocative of how native people have to deal with the everyday colonialism that we experience. We must be aware of the situation.”

Perley’s next project is an online graphic novel that will show how environmental extraction and degradation of traditional lands has forced native people to leave their own homes, raising questions about their survival.

Wisconsin, he notes, is really special because it is the heart of the Effigy Mound culture. “This region is rich in native history, and that history is our collective history.“

Yet he is struck by how little people know of that history. Perley was stunned that some viewers of “Visualizing Sovereignty” didn’t even know Native Americans are still around. “We need to recognize that North American history didn’t start in 1492. It has a much longer time span.” 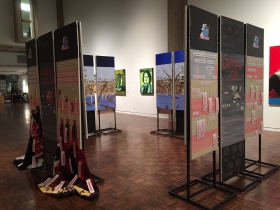 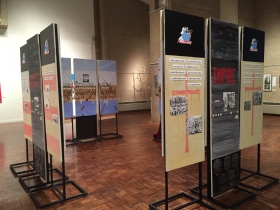