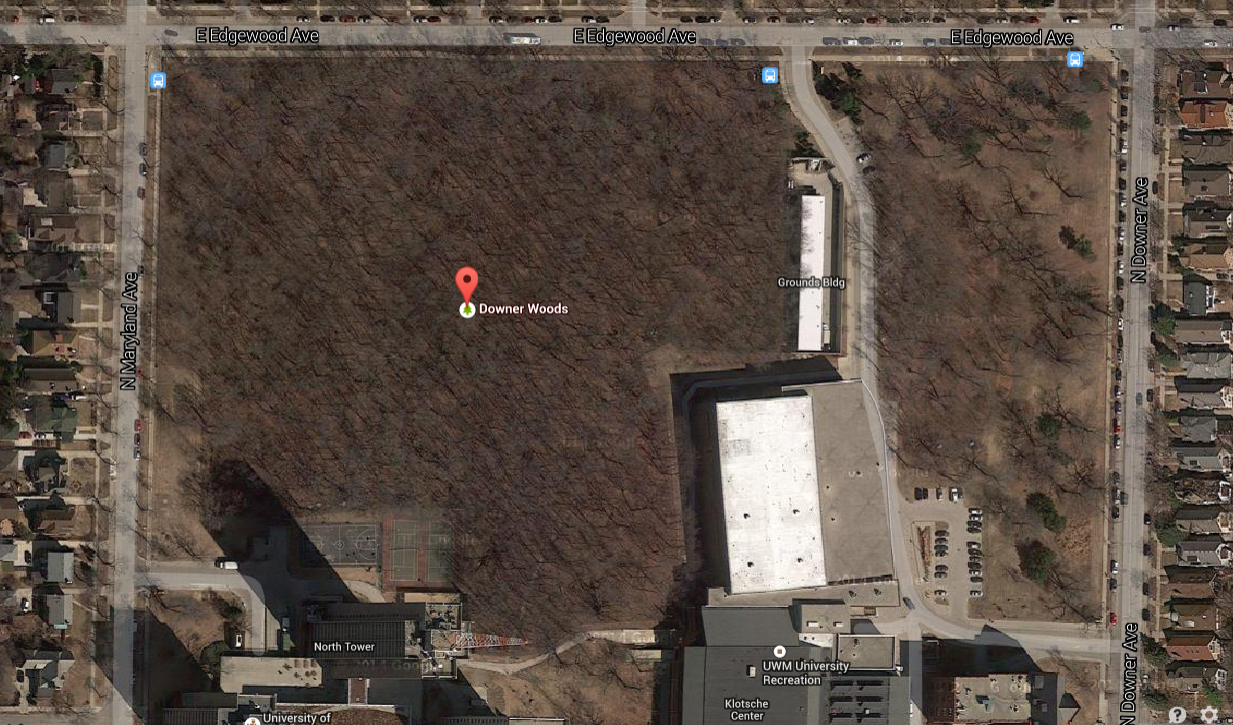 A provision in the huge budget crafted by Gov. Scott Walker and his administration would end the protected status of Downer Woods, the long-conserved forest on the main campus of UW-Milwaukee whose history may go back to Native American days. The 11.1-acre preserve that borders N. Maryland and E. Edgewood avenues is the sole remaining natural area on the campus, a publicly-accessible conservancy protected by Chapter 36 of the 2010 Wisconsin Code. But buried on page 511 of the budget bill are several provisions that would drastically alter its status.

Specifically, the budget bill calls for deleting legal provisions “requiring that the portion of the Downer Woods designated as permanently reserved woodlands be set aside exclusively for the purposes of community enhancement and relaxation.” It would also remove provisions “permitting the portions of the Downer Woods designated as park and woodland areas to be used by UW-Milwaukee as recreational and aesthetic corridors.” And it eliminates a requirement that the university “prepare and implement a Downer Woods natural area management and restoration plan to ensure that the area… is managed properly as a natural area.”

These deletions could smooth the way for the potential development and/or sale of the property. In 2013 the legislature granted the governor broad power to sell many state properties, including college and university assets, without public notice and with only limited input from legislators.

Beyond the 11.1 acres of fenced-in forest are nearby woodlands and parkland that might also be endangered. The entire Downer Woods property totals 21.4 acres and includes historic buildings that were part of the old Downer College and are now used by UWM. Language in the proposed budget also deletes “provisions specifying that the buildings of the former Downer college be preserved and may not be razed without prior approval of the Building Commission.”

None of these legal changes were requested by UWM, according to Kevin O’Connor, who handles communications for external affairs. “UWM did not ask for the changes to state law that remove the legislative protection for the Downer Woods property and buildings,” he says. “The University has no plans to develop or sell the Downer property or buildings and is presuming that the current protections for Downer Woods would be maintained by the Public Authority that is being proposed for the UW System.”

Did the UWM Real Estate Foundation request these changes? “No, this is the first that I have heard about this,” says David Gilbert, the foundation’s president.

“It’s indicative of how the Walker administration is operating with this and other proposals, which is not to talk to local officials,” says state Sen. Chris Larson (D-Milwaukee), whose district includes UWM.

The UWM Field Station has been managing the Downer Woods forest since 1998. Its staff have spent years removing dense stands of invasive species, including buckthorn, honeysuckle and garlic mustard. James Reinartz, field station director and biological sciences professor, says these efforts have paid off and that many native plant species have returned. In an article in UWM’s alumni magazine, Reinartz said “Our ultimate goal is to get the property back to being a beech-maple forest.”  He noted there is evidence “the site may have been a Native American gathering spot at one time.”

Reinartz and other professors in the biosciences and conservation programs use Downer Woods as an outdoor classroom and research site. The creation of a trail system has also made it appealing for recreational use by students and neighborhood residents. Active community support for protecting the urban woodland played a role in its ultimate preservation.

Walker’s budget includes numerous controversial provisions, including several high-profile items that have recently gotten attention and pushback. These include a $300 million cut in state funding for the UW System, freezing the Knowles-Nelson Stewardship Fund for land conservation for approximately 13 years, and major cuts to the number of staff scientists at the Department of Natural Resources.

The Downer Woods change, Larson says, “is just a glimpse at what’s happening statewide with preserved land. Maintenance is being cut back and preservations are being removed and the door is open wide for development. There is no long-term plan for the state anymore.”

The Walker administration has so far not replied to requests for comment as to governor’s rationale for making these changes. In his “The Political Environment” blog, former Journal Sentinel reporter and city official James Rowen called the provision a “stick-in-the-eye to a neighborhood which voted heavily against him.”

Update 7:45 p.m. March 4 by Urban Milwaukee Editor Bruce Murphy: Walker’s spokesperson Laurel Patrick emailed me to offer this explanation for removing the statutory protections for Downer Woods: “In order to create the UW System Authority, references to the UW must be removed from state statute to allow the proposed authority, if adopted, to create their own policies. The land will continue to be public land and we don’t anticipate there will be changes to its use.”

That sounds reassuring but raises another question: are all statutory references to the UW System and its 13 four-year colleges and 14 two-year colleges being struck down through the vehicle of a budget bill? I asked Patrick this and will update when I get a response.